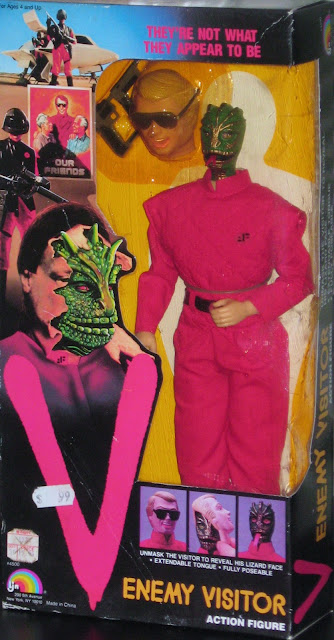 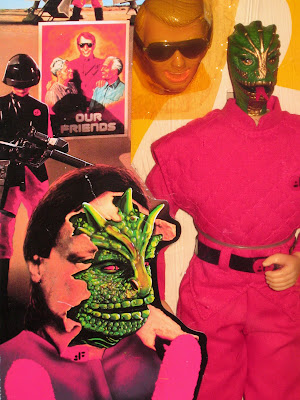 Back in 1983 Kenneth Johnson's mini-series V took America by storm.  The four hour program -- which aired over two nights -- was not just a ratings winner, it was a TV event.

I remember being in middle school at the time, and attending class the day after the first part aired on NBC.

Everyone -- and I mean everyone -- was talking about the incredible (and horrific...) scene in which a Visitor suddenly removed his human "face" to reveal a reptilian visage, and the scene in which Diana (Jane Badler) ate a live animal.  I think it was a gerbil...

Today, those special effects seem a little dated, but the camera-work in the gerbil scene is extraordinary.  If you watch closely, the camera veritably teases the viewer for a full three or four minutes, always obscuring the actions of Diana and Steven as they...ingest rodents, just off camera. Then boom, we get the full-monty: a shot of Diana's jaw distending as she swallows the wriggling, live animal.

Both the unmasking scene and the eating scene represented a kind of electric jolt. I still recall member those visuals vividly, and the considerable impact they had on me.

Given the spectacular success of V on television, I expected a lot of V toys to hit the market; spaceship models and play-sets, action figures...the works.

Alas, that wasn't really the case.

One happy exception, however, was LJN's V "Enemy Visitor" action hero.   This 12-inch alien soldier was the embodiment of Visitor evil, hiding beneath a human face (and sun glasses...), wearing his spiffy red uniform, and carrying a deadly laser weapon.

Designed for ages four and up, the Visitor figure's box came emblazoned with the legend "THEY'RE NOT WHAT THEY APPEAR TO BE!"

A graphic below the figure revealed that youngsters could "unmask the Visitor to reveal his lizard face," and made note of his "extendable [forked...] tongue."

On the back of the box, LJN notes "The Visitor keeps his true identity hidden behind a human face.  Unmask him and reveal the lizard creature!"  It reports too that "The Human Mask is worn whenever you want to disguise the Visitor's true identity.  To remove the mask, grasp one corner between your thumb and forefinger and gently pull off." 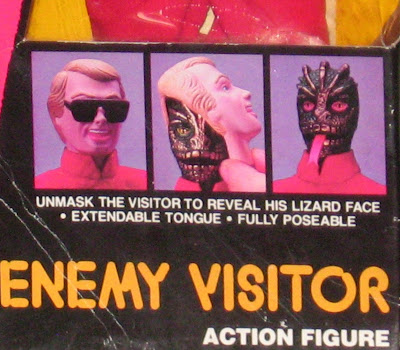 The box also suggests: "To make the Visitor's tongue move in and out, push the hidden button on his back."

Beneath this legend is a circle with three "Proof of Purchase V points," which would have been useful, I presume, to buy other V toys or products.  But were there any?  I have the vaguest memories of some V puzzles, and maybe a toy machine gun emblazoned with the V logo.

Although V was actually remade recently, it was done so by people who didn't truly seem to appreciate, let alone understand the iconic imagery of the Kenneth Johnson original.

There's still something fearsome about the classic red uniform and cap design featured on this toy, especially when coupled with the propaganda posters the Visitors plastered on every wall (and which also appear on the figure's box).  These posters maintain the Visitors are "our friends."  But of course, we know better...

Once upon a time, these aliens were really scary, right down to the swastika-like emblems on their chests.  And when they weren't scary, they were fun in the way that classic monsters like Dracula, The Wolfman or The Mummy are fun.

Whatever the relative values of the re-imagined new V, it certainly wasn't very much fun, and it was rarely if ever frightening.

Looking again at this figure from the 1980s original, I miss those qualities all the more. 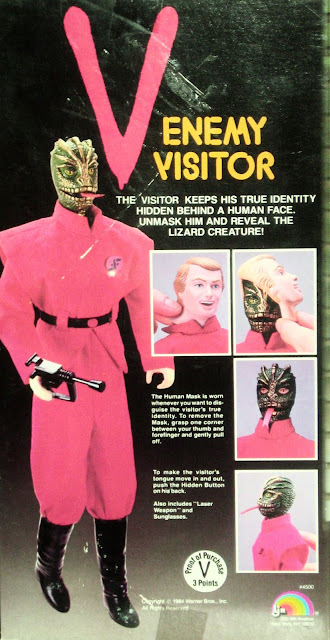