The Fungus Among Us: Cult TV’s Most Memorable Eukaryotes. 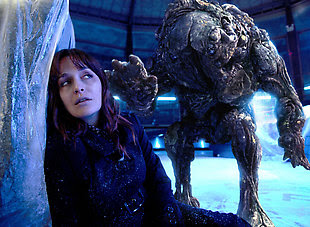 Mushrooms, yeasts, and molds…oh my.

Eukaryotic life forms – fungi – are non-vascular organisms that reproduce by means of spores.  Unlike bacteria, fungi always possess a nucleus and are made of thin threads known as “hyphae,” or all together, in networks, “mycelium.”

Typically fungi are not motile (meaning capable of motion), but in cult-television history that’s not always the case.   Additionally, many fungi are saprophytic, meaning that they release digestive enzymes and then absorb the digested food.  Many fungi in the real world are also mutualists (lichens, for example), but some (especially in genre television) are decidedly parasitic in nature.

Over the decades, monstrous (and sometimes helpful…) fungi have appeared in many popular science fiction programs.  Thus today, I offer a list of some of the most memorable TV fungi, both friendly and hostile. 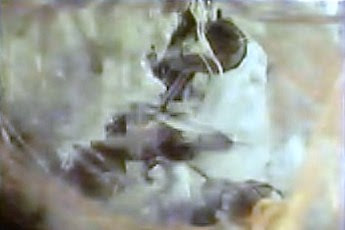 7.         Blake’s 7: “The Web” (January 30, 1978). In this early episode of Blake’s 7 by creator Terry Nation, the Liberator is ensnared in space in an organic, fungal web.  The web is a tool of an immortal creature called Saymon (Richard Beale), a corporate life form.  On the planet below the web, Saymon has genetically engineered creatures called Decimas that Roj Blake (Gareth Thomas) attempts to free from enslavement.  Meanwhile, Saymon – one of the legendary Auron “Lost” -- desires the Liberator’s power cells.  Unless he gets them, the Liberator will be permanently ensnared in the gossamer filaments of the space fungus. 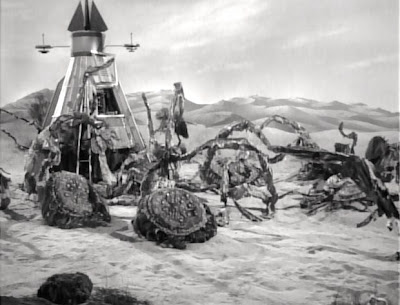 6.         Lost in Space: “Welcome Stranger” (October 20, 1965.) In this sixth episode of Irwin Allen’s Lost in Space written by Peter Packer, an astronaut from Earth named Jimmy Hapgood (Warren Oates) lands near the Robinson encampment, unaware that the tiny fungal life-forms on his capsule are evolving in the friendly atmosphere and rapidly becoming giant, tentacled monsters..  When he offers to take Penny and Will back with him on his shape, he has no idea that the area is overrun these frightening monsters. 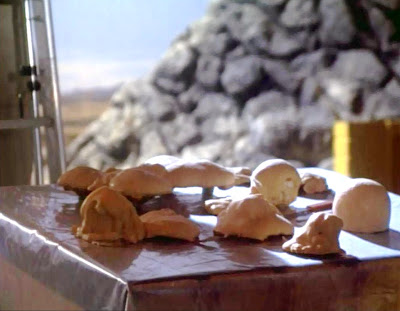 5.         Space: 1999: “The Last Sunset” and “Journey to Where.”  In “The Last Sunset” by Christopher Penfold, aliens from the planet Ariel gift Moonbase Alpha with a breathable lunar atmosphere.  Dr. Helena Russell (Barbara Bain) leads a team to judge the possibility of reclaiming the surface of the moon, but her Eagle crashes in a wind storm.

While attempting to get word to Alpha, a member of her exploratory team, controller Paul Morrow (Prentis Hancock) discovers mushrooms growing in the new atmosphere.  He samples one, and soon turns psychotic, imagining the moon's surface as a future Garden of Eden, made into a paradise by the mushrooms, by so-called “manna from heaven.”  Eventually, Helena and her team are rescued, and it is learned that the mushrooms actually possessed dangerous hallucinogenic elements… 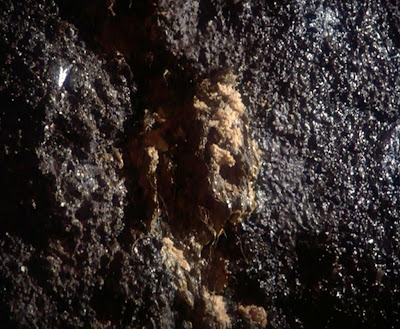 In the second season episode “Journey to Where,” Helena falls ill from “viral pneumonia” after a time travel trip to Earth in the year 1339.  Captured by people of that era, Helena, Commander Koenig (Martin Landau) and pilot Alan Carter (Nick Tate) are imprisoned in a cave, where Helen sees fungus growing on the cave walls.  She notes that “fungoids” are the basis for the only drugs known to cure viral pneumonia.  She asks Koenig to pick some off the wall to treat her, and creates herself a remedy.

Incidentally, this particular scene between Koenig and Helena is repeated, almost note for note in the first season Star Trek: The Next Generation episode “Arsenal of Freedom.”  Only there it took place in another cave, and between another commanding officer and CMO: Captain Picard and Dr. Crusher. 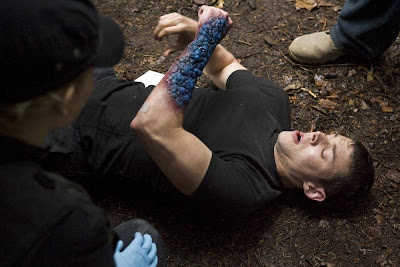 4.         SGU: “Cloverdale.” (October 26, 2010). In this second season episode of Stargate Universe, the crew of Destiny is menaced on a lush alien planet by a dangerous fungus creature.  Matthew Scott (Brian J. Smith) is infected by it, and the fungus begins to grow, out-of-control, on his arm.  As the fungus rapidly spreads towards Scott's trunk, Dr. Rush (Robert Carlyle) suggests amputation (with bone saw, no less...), but reverses course when he learns the fungus is already in Scott’s blood stream.  While unconscious and infected by the alien fungus, Matthew imagines an elaborate fantasy in which he returns to the picturesque home-town called “Cloverdale” and awaits his wedding day with Chloe (Elyse Levesque).  Meanwhile, walking plant creatures that resemble triffids could hold the key to reversing Matthew’s rapidly-spreading infection. 3.         The X-Files: “Field Trip” (May 19, 1999).  In this sixth-season episode of The X-Files by John Shiban and Vince Gilligan, F.B.I. agents Scully (Gillian Anderson) and Mulder (David Duchovny) visit my neck of the woods, North Carolina, to investigate the death of two hikers in the woods.  They soon run afoul of a hungry, giant, subterranean mushroom that begins to slowly absorb and digest them.  During this lengthy process, Mulder and Scully both hallucinate that they have returned home to their lives.  In Scully’s case, she imagines Mulder’s death and wake.  In his case, Mulder tracks a story of alien abduction.  The duo awake just in time, and with Skinner’s (Mitch Pileggi) help escape from the cave of the giant ravenous mushrooms… 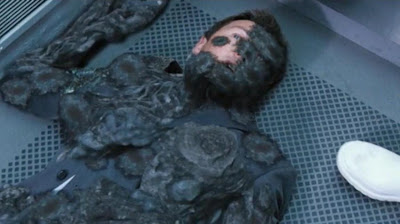 2.         Primeval: Season 3. Episode 5 (April 25, 2009).  In this episode of the BBC time incursion series, an anomaly opens up in a millionaire's apartment.  It leads to Earth's distant future, where an assistant soon inhales the spores of a giant fungus.  He returns to the presents and spreads the spores to his heartless boss, Richard Bentley (William Scott-Mason), who begins to transform into a terrifying fungus-man.

Meanwhile, at the ARC (Anomaly Research Center) one of Christine Johnson’s (Belinda Stewart-Wilson) men is also exposed to the fast-growing fungus, and evolves into one of the mushroom monsters as well. Trapped in a lab with the rapidly-growing fungi, Connor Temple (Andrew-Lee Potts) realizes that extreme cold holds the key to halting the spread of the avaricious fungus from the future.
Connor's discovery comes not a moment too soon, as team leader Jenny Lewis (Lucy Brown) is imperiled by the Fungus Man, and exposed to the toxic material… 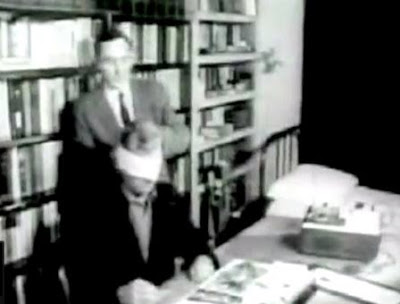 Series director and narrator John Newland hosts a trip to a remote village in Mexico to determine along with experts Dr. Puharich, Dr. Barbara Brown, spiritual guru David Grey and Stanford professor Jeffrey Smith, if a special mushroom with hallucinogenic properties (called “X”) is capable of enhancing extra sensory perception in humans.  In one scene, we watch as the members of the team sample peyote before our eyes.

Then, upon returning to America, Newland himself also consumes the special mushroom in Dr. Puharich’s Palo Alto laboratory and is tested for an increase in psychic power and ESP.   Although the late John Newland reported to me that he experienced flashbacks for months after sampling the mushroom, he never did feel any kind of psychic awareness.

Still, this episode has become legend because it is likely the only time in prime time history that a series host – and Golden Age Hollywood star – tripped before our eyes on American network television.

Email ThisBlogThis!Share to TwitterShare to FacebookShare to Pinterest
Labels: From the Archive