When the Porters run out of batteries for their flashlight and other modern appliances, Mr. Porter (Timothy Bottoms) realizes that a replacement power source is available: the glowing crystals of the land of the lost.

Mr. Porter goes in search of the unusual crystals, but soon runs afoul of Shung, leader of the outlaw Sleestaks.

The two beings argue and battle, but then seek shelter in a cave together when confronted by Scarface, the ravenous T-Rex.

Although Shung is much stronger than Mr. Porter is, his vision is poor because of a blow to the head.  The two allies survive together for a time in the dark before Mr. Porter escapes with crystals.

When Kevin asks if they should bury Shung alive in the cavern, Mr. Porter realizes that to do so would be inhuman.  “Without our humanity, what do we have left?” he asks. 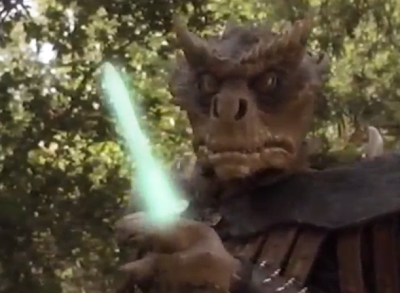 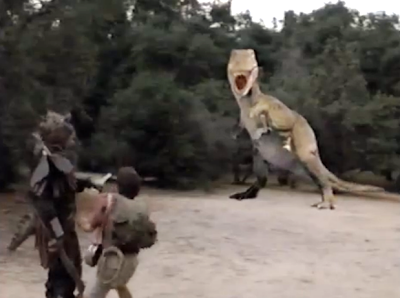 “Power Play” trots out a familiar genre television cliché. I have called it “My Enemy, My Ally,” and the trope involves team work between unlike and often opposing forces, or more basically, bad guys and good guys teaming up to survive a deadly threat.

The “My Enemy, My Ally” chestnut has appeared on Jason of Star Command in 1979 as “Face to Face,” on Gerry Anderson’s UFO as “Survival,” on Planet of the Apes (1974) as “The Trap” and on Star Trek: The Next Generation as “The Enemy.”

Even the original Land of the Lost featured an episode with a good guy and a bad guy working together, called “The Hole.”  There, Rick Marshall (Spencer Milligan) teamed up with a talking Sleestak called S’latch to survive in the Sleestak pit.

Here, Shung and Porter are uneasy allies, if only for a short-time, yet their shared experience gives Porter some understanding -- and empathy -- for his enemy.  As far as these stories go, “Power Play” doesn’t offer much new, but merely re-iterates the central idea that sometimes, being able to see an enemy’s perspective is…humanizing. 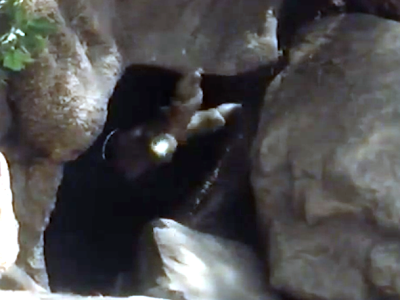 In terms of Land of the Lost continuity, this episode offers two other points of note.  The first involves the crystals.  Specifically, they are used to power the failing 20th century appliances, which is a nice touch in terms of reality.  It just wouldn’t make sense if the radio, the flashlight, and other conveniences kept on working, with no word about failing power.  It is rewarding that the writers are starting to think about how the Porters will integrate their modern conveniences into a world with no support for them.

Secondly, and oddly, Shung speaks very much like a 20th century American in this story.  Specifically, he tells Mr. Porter “well, well, well…this just isn’t your day.”   That’s a turn of phrase that’s a bit difficult to swallow coming from a Sleestak.