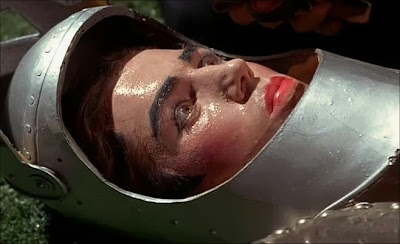 A knight is a person -- usually a warrior -- rewarded for service to country with an honorary title, usually by a king or queen.

Considered a noble, the knight is also associated with a Chivalric code.  In today’s modern world, even non-soldiers or warriors are often gifted with knighthood.  The traditional gear of a medieval knight is a gleaming suit of armor.

The knight has appeared frequently in cult-television history, and often, counter-intuitively, perhaps, as a villain.

In classic Star Trek (1966 – 1969), for instance, a menacing “black knight” murders Doctor McCoy (DeForest Kelley) in the first season episode “Shore Leave.”  The knight appears on a distant world, and turns out to be an automaton created for an “amusement park” planet.

Later, in Star Trek: The Next Generation  (1987 – 1994), a holographic night appeared in the seventh season episode “Emergence.” In Kolchak: The Night Stalker (1974 - 1975), a story called “The Knightly Murders” involves the spirit of a dead knight “possessing” a suit of armor and killing those who threaten to destroy its home, a museum. The museum is scheduled to be replaced by a disco...

In the remake of Land of the Lost (1991 – 1992) from Sid and Marty Krofft, the episode “Day for Knight” finds a young knight wandering through a portal into the prehistoric Land of the Lost.  There, he challenges the Sleestak and saves Christa (Shannon Day), much to Kevin Porter’s chagrin.  Later, the knight attempts to defeat a dragon -- really the T-Rex called Scarface -- and reveals that he is actually but a lowly squire. 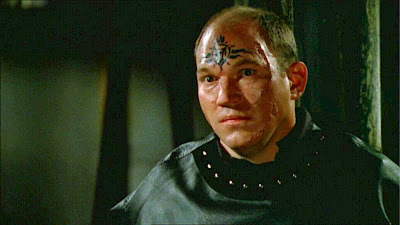 Knights also threatened the Chosen One, Buffy Sommers (Sarah Michelle Gellar), in the latter-half of the fifth season of Buffy the Vampire Slayer (1997 – 2003).  In episodes such as “Spiral,” these knights from another dimension attempt to kill Buffy’s sister, Dawn, lest the evil god Glory attempt to use the girl's mystical blood to bring down the walls between dimensions.

The variation iterations of Ben 10 -- Ben 10 Alien Force, Ben 10: Ultimate Alien and Ben 10: Omniverse -- all feature a group of villains known as the Forever Knights.  These human beings wear suits of armor, have captured an alien dragon, and demonstrate total hatred and bigotry towars any life-form that was not born on Earth.

Game of Thrones, Merlin, and The Tudors have all featured knights of late, which have been seen in jousting contests.  Knights also appeared in the long-forgotten 1983 series Wizards and Warriors.
at January 13, 2014