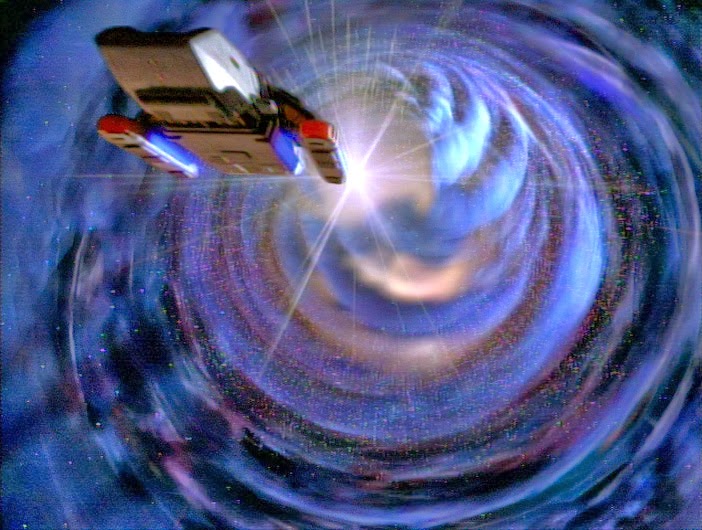 Both of these hazards to navigation/space travel have been featured heavily in science fiction television history.

For instance, in 1973’s “The Three Doctors,” a Doctor Who (1963 – 1989) serial, three incarnations of the Doctor (Hartnell, Troughton, and Pertwee) must investigate and confront Omega, a legendary Time Lord engineer that is trapped inside a black hole, and seeking to escape.  At one point in the story, UNIT Headquarters on Earth is, itself, transported to the “eye” of the black hole. 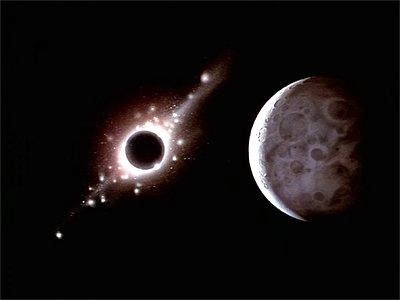 One of the most beloved and well-regarded episodes of Gerry and Sylvia Anderson’s Space: 1999 (1975 – 1979), “The Black Sun,” involves Earth’s errant moon getting dragged inside an approaching black hole, and the metaphysical journey that occurs inside the event horizon. Specifically, Commander Koenig (Martin Landau) and Professor Victor Bergman (Barry Morse) converse with what seems to be a benevolent entity, one that shepherds Moonbase Alpha through its dangerous sojourn in the swirling forces of the black hole. 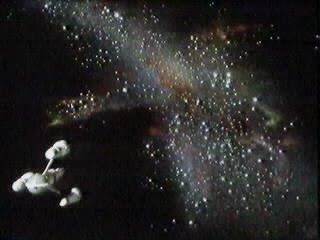 In Blake’s 7 (1978 – 1981) the Liberator and its outlaw crew encounters a “gravitational vortex” -- a phenomenon that appears to be a black hole -- in the episode “Breakdown.”  In the third season story, “Dawn of the Gods,” the Liberator enters a black hole again, which in this case is actually the realm of “Thaarn,” a God of Darkness in Auron legend. 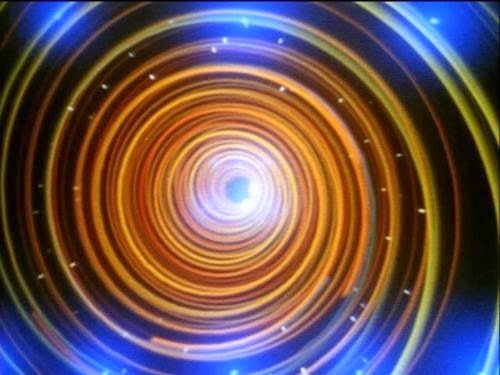 In Buck Rogers in the 25th Century (1979 – 1981), the two-part episode/season finale “Flight of the War Witch” involves a journey by Buck (and later Ardala’s Draconia…) from one universe to another by a “vortex” which today we might term a wormhole.

In the Star Trek mythos, wormholes have become a staple of the franchise in terms of latter-day storytelling. In the third season Next Generation (1987 – 1994) episode “The Price,” the Enterprise and the Ferengi haggle over ownership of a stable wormhole that proves to be a lemon…meaning not so stable at all. 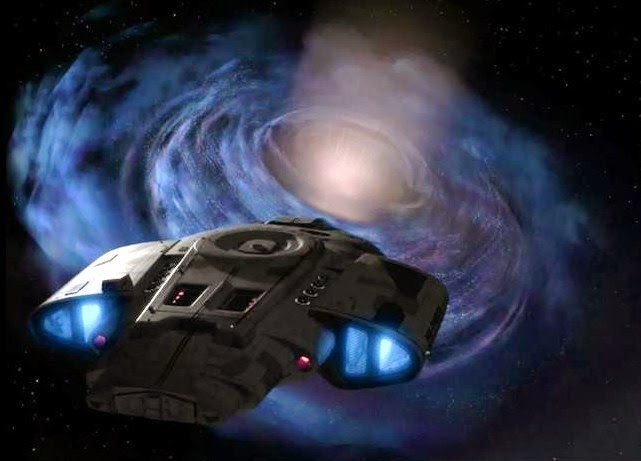 The Bajoran wormhole is a key plot point of Star Trek: Deep Space Nine (1993 -1999).  Unlike the wormhole in the Next Generation episode, this portal is actually stable, and leads to the distant Gamma Quadrant.  Unfortunately for the Federation, the wormhole also brings a dark and deadly force to the Alpha Quadrant: the Dominion.

Wormholes also play an important role in Farscape (1999 – 2003). In particular, astronaut John Crichton’s (Ben Browder) research into wormholes -- which he hopes to use to get home to Earth from the Uncharted Territories -- is instead coveted by Scorpius as a weapon for taking over vast swaths of inhabited space. To come full circle, a new Doctor Who story (2007), “The Impossible Planet/The Satan Pit” finds the Tenth Doctor (David Tennant) and Rose Tyler (Billie Piper) landing the TARDIS on a facility on a planet in stable orbit around a gigantic black hole.  The planet is actually the prison of the Beast, an ancient, Devil-like entity.

Black holes and wormholes have also appeared on series such as Andromeda, Sliders, Star Trek: Voyager, and Stargate SG-1.
at January 27, 2014