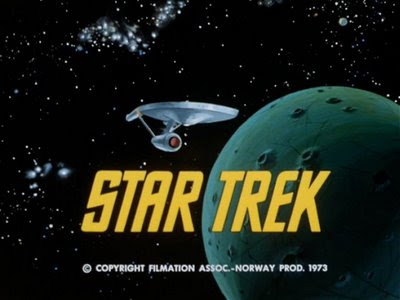 Note: As reader Donald G. pointed out last week, I managed somehow to never post my review for “The Terratin Incident.”  So I’ll double up with it today... 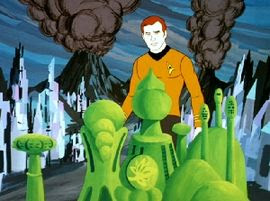 The U.S.S. Enterprise approaches a burned-out supernova while mapping a distant gas cloud.  From that region of space, it intercepts a transmission that consists of one word: “Terratin.”

Under Captain Kirk’s (William Shatner) orders, the Enterprise diverts to the source of the mysterious transmission: a class-M planet with a crystalline nature.  Soon, however, proximity to the unusual planet begins to smash the connections in every one of the starship’s dilithium crystals.  Worse, the “ship’s personnel have contracted…and may be continuing to shrink.”

As the Enterprise crew grows smaller every hour, Mr. Spock (Leonard Nimoy) theorizes that soon the crew will no longer be able to control the ship.  Kirk beams down to the planet -- aware he may never be able to return -- and discovers a lost Earth colony on the surface, one originally known as “Terra Ten,” now referred to as Terratin… 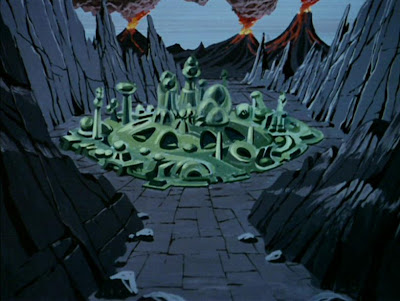 “The Terratin Incident” exposes again a particular strain of the storytelling style in Star Trek: The Animated Series (1973- 1974).  Although the series often features brilliant and complex continuity with the original live action Star Trek (1966 – 1969) as well as good science-fiction ideas, it also often belies its status as a Saturday morning TV program by featuring what can only be described as very juvenile concepts.

In this case, the crew of the Enterprise contracts, or shrinks.

Already on the series we’ve seen giant creatures or beings in “The Infinite Vulcan” and “More Tribbles, More Troubles,” and love potions in “Mudd’s Passion.”  Coming up, we get reverse aging in “The Counter-Clock Incident.”

On one hand, these are all dynamic visual concepts well-suited to animation, ones that would have been impossible (or at least expensive…) to dramatize on the original series. 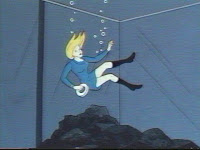 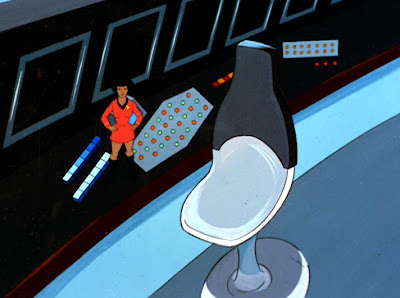 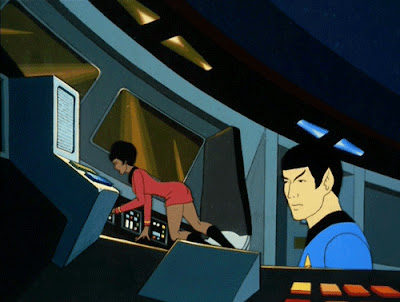 Yet by the same token, these ideas seem very childish in comparison with the most complex, adult stories, like “The Survivor,” “The Jihad” and “The Magicks of Megas-Tu.”  The giants in both the tribbles sequel and “The Infinite Vulcan” don’t seem really necessary to the tale…instead they are merely high-concept notions appealing to the kiddies.

In the case of “The Terratin Incident,” the story is about a lost colony that has changed its form unwittingly over the centuries, and so the idea of shrinking is actually intrinsic to the tale, at least, and not just a throwaway.   Additionally, the episode features some great images of a tiny Enterprise crew -- Lilliputian-sized -- attempting to control the ship as they grow ever smaller.  This means that Nurse Chapel falls into a fish aquarium in sick bay and almost drowns, and that Scotty and his engineers must essentially mountain-climb to reach the transporter panel.  These moments are fun, but also a little difficult to believe.

It’s also a little disappointing that this episode resolves around the notion that Kirk must threaten the Terratin people and their city with total destruction to get them to help the Enterprise crew to repair their depleted dilithium crystals.  This is gunboat diplomacy at its worst, and unfortunately, the idea occasionally recurs on Star Trek.  Star Trek, at its best, and in episodes such as “Mirror, Mirror” often notes that the forces of Starfleet will never use phaser banks to force a planet to bend to its will.  Yet in “The Terratin Incident,” that’s precisely what occurs.

The other plot resolution point in “The Terratin Incident” is also a cliché in terms of the Trek universe: the transporter device proves a deus ex machina, undoes the shrinking process, and restores everyone to normal.  Presto Magic!


The same thing happens in Star Trek: The Next Generation (1987 – 1994) on occasion, in episodes such as “Lonely Among Us” and “Unnatural Selection,” and such stories lead to the notion that the transporter is really a miracle or magical device, one that can undo physiological disorders of any kind.  If the transporter were really so valuable in curing diseases, then all of Starfleet (and Federation) medicine would be based entirely on its application.  But of course, that's not the case.