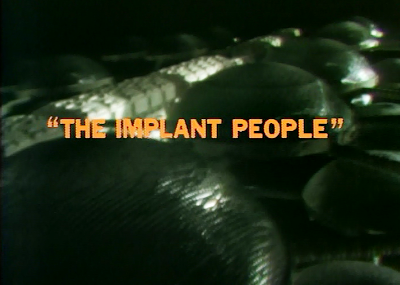 Although it may not be saying much given the general quality of the overall enterprise, “The Implant People” is one of the best-paced, most intriguing episodes in The Starlost (1973 – 1973) canon.  That doesn’t mean the episode is always good, however, and indeed there’s a real problem in logic involved in the narrative, which I’ll explain below.

However, this episode, not unlike “Mr. Smith of Manchester,” involves Devon (Keir Dullea), Rachel (Gay Rowan) and Garth (Robin Ward) endeavoring to help others and act, in a sense, more heroically than is often depicted.  The story also seems better-staged, shot, and paced than many previous entries as well.  This improvement seems indicative of a learning curve since the next episode, “Return of Oro,” also moves along at a good clip, and features better blocking and movement. 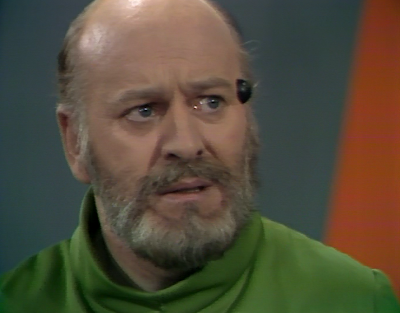 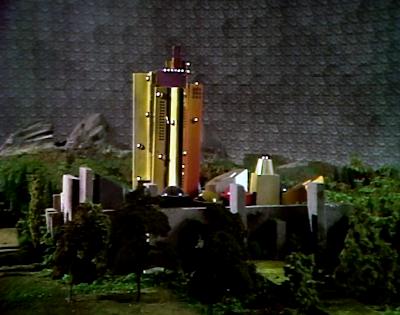 In fact, Roloff is inching closer to taking total control over the biosphere as he plays the peoples’ council against the grieving ruler, Serina (Pat Collins), who was recently widowed.  As the go-between delivering messages between these two factions, Roloff begins to reserve total power for himself.  He does so by lies, obstruction, and trickery.  At one point, he even tricks Devon into being implanted.

Soon, a feisty and regal Serina realizes she is being manipulated, and with Devon, Garth and Rachel’s help, sets out to stop Roloff and build a fairer society for all, one where the implant can no longer enslave the population.

The big problem in logic that I see in “The Implant People” is that Professor Brant, himself implanted, possesses the technology to un-implant himself and any others at any time, as the third act reveals.  Given this availability of instrumentation, why doesn’t he merely release himself from Roloff’s enslavement, and remove the implant from himself, his scientist cohorts, and the people’s council-members?  To do so would be to rob Roloff of his only means of domination.  And since Brant isn’t guarded all the time by Roloff or his guards, this seems eminently possible.

Instead, Brant doesn’t remove the implant until led to that (obvious) course of action by Devon and Garth, and that seems silly.  You’d only need to be rendered paralyzed by that kind of pain once, I would think, before choosing to remove the implant, especially with the means readily available.  The implant removal device is right there in the laboratory, after all...

Another problem here is one featured frequently on The Starlost.  Roloff is consulted about the Earth Ship Ark’s impending collision course, and says he can’t do anything to stop it.  Then he goes right back to consolidating power in his biosphere.  Could anyone really be so short-sighted, or have such tunnel vision?  Would  anyone really go to so much trouble to seize power in a biosphere knowing that the Ark could be speeding towards destruction at any minute?  It doesn’t make a whole lot of sense, and it's not like this idea of "tunnel vision" is one of the social commentaries on the show. 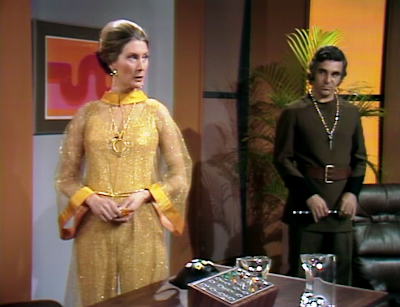 Despite such issues “The Implant People” in large part succeeds for two reasons.  The first is that Donnelly Rhodes is really great as the manipulative, Iago-like Roloff.  Rhodes makes a great villain, and his character's   machinations make for some entertaining viewing.  Roloff is a silver-tongued devil, for sure. 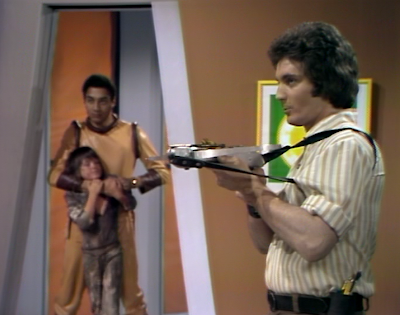 Secondly, this episode -- like the not-very-good“ Astromedics” -- features a stronger role for the taciturn Garth (Robin Ward).  In many ways, he’s quietly stepping up as the new, reluctant hero of The Starlost.  In some ways, I prefer Garth to the increasingly strident and pedantic Devon, who constantly seems to be asserting his will, often at the expense of his comrades.   As the series goes on (and there are only a handful of episodes left to review at this point…) Devon grows less likable as Garth grows more likable, and more prominent.  I don't really blame Keir Dullea for the fact that Devon isn't very likable.  It's obvious that the writers were trying to transform the character into an aggressive, Captain Kirk-like alpha male of command stature.  But that interpretation of the character doesn't fit his background as a Quaker, essentially, and doesn't leave him much room to reveal humanity or vulnerability.

Next week, Walter Koenig makes an encore appearance in “The Return of Oro.”
at January 27, 2013