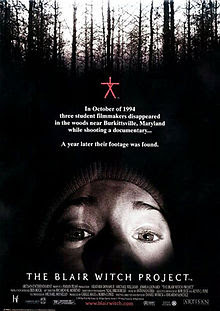 “While I certainly enjoy good film (horror and otherwise), I've always had a bit of a mental block about "found-footage" fare -- and as such, I can't honestly say that I recall watching even one that featured it.

So given that this sub-genre is bound to have both good and bad examples - where's a good place to start?  What are some of the finer examples of the form?”

Woodchuckgod, that’s a terrific question, especially since I’ve been covering a lot of found footage horror movies in recent weeks.

I enjoy found-footage films tremendously for what they do offer, and it’s also fair to note at this juncture what they don’t (frequently) offer.

Found-footage films essentially accent or augment the experiential aspect of horror.  The action feels very spontaneous, like it is happening to you.  The first-person subjective camera and often hand-held approach forge a kind of immediacy that traditional film simply can’t.  This is cinema-verite on steroids in other words.

The found-footage format has a number of drawbacks too.

The first and perhaps most significant limitation is that found footage films can’t make full use of many aspects of the film grammar lexicon because they are locked immutably into that P.O.V. perspective.

This means that, in some sense, found footage films eschew the traditional artistry we associate with great horror films, all in the name of immediacy and urgency.  How you rate that trade-off in approach is largely a personal matter, I would suggest.

Another way to put this: A traditional film, with the capacity to freely use a variety of compositions and angles, is like an orchestra playing.  A found-footage film is like one instrument playing alone, instead.  In the latter case, the effect can still be quite beautiful.

Second, found footage films, if done poorly, boast a problem with the believability factor. Unless a director is especially canny or the central situation especially compelling, there comes a point in the worst found footage films when you begin to question why an imperiled person feels compelled to film absolutely everything that occurs.  It doesn’t ring true with what we know of human behavior in crisis situations.  At some point, recording an event becomes much less important than ensuring personal survival.

Another limitation involves cutting.  A found footage film with a camera as our active and engaged “eye” in a crisis is our only perspective, unless there is more than one camera available.  This limitation requires some good writing, because you can’t realistically or easily change to another group of characters, or another location.  Accordingly, found footage movies are largely about sustaining suspense, and heightening suspense in what I call “pressure cooker” situations.

My favorite and most highly-recommended found-footage film is also one of the earliest and the most controversial: 1999’s The Blair Witch Project.  I tend to think it’s a perfect place to start any kind of study or survey of the sub-genre because few films have accomplished more, creatively-speaking with the format.

In short, The Blair Witch Project finds a way both to include the immediate, urgent aspects of its first person perspective at the same time that it finds a way to function artistically.

When you break it down, The Blair Witch Project is a movie about how we see, and the filters or barriers we erect between us and the rest of the world.  Even a camera -- an eye essentially -- can only capture what it captures, if you’ll excuse my wording. Audiences (foolishly) complained about The Blair Witch Project because they don’t see the Witch in the film and, in fact, don’t know if a witch is present at all.

Of course, that’s the point of the film.

Just because you have a camera in record mode doesn’t mean that it is going to see what is “there.”

So the movie becomes a meditation on perception and judgment, and the ways that the presence of a camera can protect us, trick us, and delude us, even.  I think this idea has come much more into focus since 9/11.

The Blair Witch Project is also exceptionally clever because two of its three main characters carry cameras, which allow for frequent switches in viewpoint, perspective and visualization.

Likewise, the film doesn’t’ always show “everything” that happens.  At various points the camera only is activated after a major event has happened, and that approach seems to reflect life much more closely than, for instance, Paranormal Activity, where ghostly events occur center frame, and in extreme close-up JUST SO YOU DON’T MISS ANYTHING. 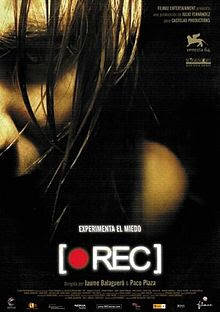 Another brilliant found-footage film that I might similarly recommend as a starting point is [REC] (2007), a foreign language horror film concerning a TV news anchor and camera man trapped in an apartment building during the beginning, crucial hours of a zombie apocalypse.

The film boasts subtitles, of course, but the situation it diagrams is universal, so there’s no problem, really, with a language barrier.  The whole feeling of the film is of being trapped -- like a rat in a cage -- and trying to survive against seemingly impossible odds and continuously escalating odds.  I don’t argue the movie is as self-reflexive or genuinely artistic as The Blair Witch Project is, but it is a good, scary, straightforward introduction to the form of found footage.

If you fear the side-effect of vertigo -- which is actually a big deal for many prospective viewers -- it might be best to start with a film that employs limited or sporadic found-footage techniques first.  Lovely Molly (2012), from one of The Blair Witch Project directors would be a prime candidate if that’s the way you decide to go. 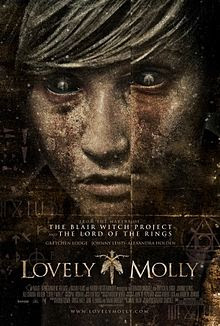 So, I recommend The Blair Witch Project and [REC] first and foremost, though Cloverfield (2008) offers a fresh and ingenious take on old movie monster aesthetics.

Please let us know which film you decide to start with, and how it goes for you.  I know I’m curious about it….

Don’t forget to e-mail me your questions at Muirbusiness@yahoo.com.
at January 07, 2013