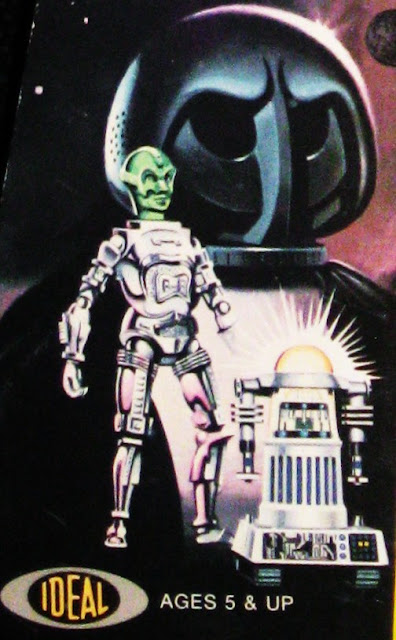 Just keep telling yourself, this eleven inch tall action figure from Ideal, and manufactured in 1977, is not Darth Vader.

Try it again: the Knight of Darkness is NOT Darth Vader.

Whether or not the Knight of Darkness resembles Darth Vader (d'oh!) is likely immaterial, because this "fearsome enemy from outer space" remains one awesome-looking sci-fi enemy and a great toy to boot.

Perhaps, Darth Vader, the Knight of Darkness and Baron Karza could all get together for lunch at the Mos Eisley cantina and compare notes on the Dark Side...

Anyway, The Knight of Darkness (No. 4603 - 7) looked so much like Darth Vader that allegedly George Lucas sued Ideal for copyright infringement.  He reportedly lost the case, in part because Ideal's S.T.A.R. Team (of which the Knight was a new part) already had a history on the toy market of over a decade.  Still, looking at the box art, at ZEM-21 (C-3PO) and the Knight in particular, it's tough not to feel a Star Wars vibe.  At least a little.

I remember as a kid in 1977 that I really wanted Star Wars toys, and  then my grandparents suddenly showed up for my birthday with a Zeroid (R2-D2?), ZEM-21, the Knight of Darkness and the Star Hawk ("the spacecraft of the Zeroid.")  At first I was tremendously disappointed and confused.  My grandparents had been snookered by a Star Wars knock-off and even at age seven, I knew it.

But then, I actually started playing with awesome Ideal S.T.A.R. Team toys, and creating my own space adventures.  I must admit,  it was actually a bit more fun inventing a universe than merely recreating scenes from Star Wars.

So let's hear it for the Star Wars knock-offs.  There have been some great ones over the years, but none perhaps, more malevolent-appearing and yes, fearsome, than this Knight of Darkness, "dressed in his special uniform and boots," to quote the box.   The Knight, based on Captain Action figure molds, also came complete with a mean-looking laser pistol.

If only Ideal had released some minions for this Knight of Darkness to command, all would have been right with the universe. 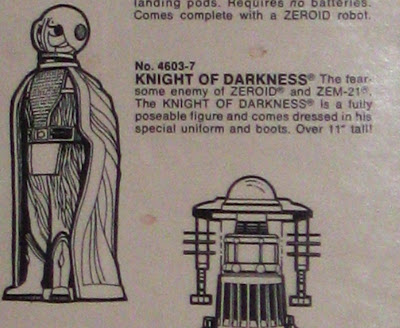 Email ThisBlogThis!Share to TwitterShare to FacebookShare to Pinterest
Labels: 2012, A Year in Collectibles, collectible of the week