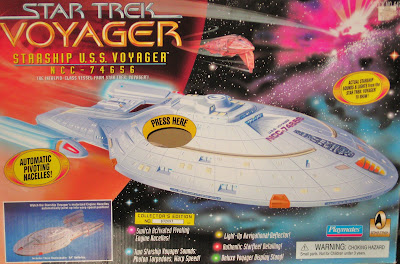 You can read my 2010 critical evaluation and dissection of Star Trek: Voyager (1995 - 2001) here, if you're interested in doing so, but the merits of the TV series aside, Voyager (NCC-74656) herself remains one gorgeous spaceship.

I fell in love with this Starfleet vessel the first time I watched the program's picturesque, galaxy-spanning opening credits, I suppose.  The ship is absolutely gorgeous in terms of the aesthetics of Star Trek's future. 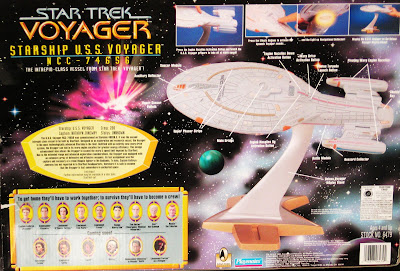 I should add, I liked Voyager's lines a lot better than those of the dull Enterprise E design we saw in First Contact, Insurrection, and Nemesis.  But then again, it's tough to replace the Enterprise D, a beloved ship we all feel we traveled with for seven years.

Playmates released a whole line of Voyager toys in 1995, including this plastic representation of the Intrepid class vessel, "featuring sounds and lights from" the TV show.

Today, this Voyager mock-up stands as one of the rarer and more sought-out of the Playmates Trek fleet, perhaps in part because many fans had begun to feel ennui with modern Star Trek by 1995 and were no longer buying the toys.  Or maybe fewer Voyagers were made (though mine is # 32,697....). I don't know for sure why, but Voyager seems to have become one of the more collectible Playmates ships in recent years.  On E-Bay the cost of Voyager, even outside the box, is often, well, astronomical. 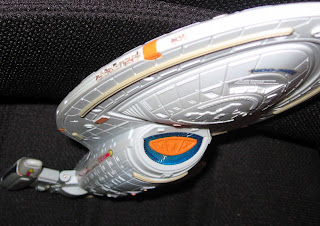 In terms of attention to detail, the ship looks terrific, and is very show accurate.  The decals on mine, however, are starting to peel, much to my dismay.  I guess 1995 really was a long time ago...

As you can also see, I couldn't be disciplined and keep my Voyager packaged in the box.  Back in 1995, when Voyager started, I was really quite taken with it, and hopeful about what it could achieve.  So I had to open the toy.  Right?

Today, Voyager is displayed proudly in my home office, right above my First Contact, Borg-centric Trek toys.  Occasionally, Joel asks for  Janeway's starship to come down from its perch for a frantic game of spaceship-fu -- meaning we run up and down the hallways of my house battling with opposing starships -- and that's a good work out for this durable, fine old girl.
at December 26, 2012

Email ThisBlogThis!Share to TwitterShare to FacebookShare to Pinterest
Labels: 2012, A Year in Collectibles, collectible of the week