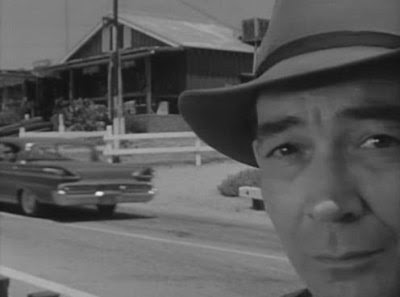 The Twilight Zone (1959 – 1964) is an anthology series and thus it features no continuing characters save for Rod Serling’s staccato-voiced narrator. However, in one memorable circumstance, a character does recur in the series.

His name is Mr. Death.

This distinctive character -- this personification or embodiment of mortality -- appears in three episodes of The Twilight Zone: “One for the Angels,” “The Hitch-hiker” and “Nothing in the Dark.”

And in each installment Mr. Death serves roughly the same thematic and narrative purpose: to provoke first fear, and then, finally, a sense of acceptance about mortality.

In other words, those characters that come to interface with Mr. Death in The Twilight Zone first consider him an existential “terror,” but upon closer contact come to understand that his presence, beyond being inevitable, is not so dreadful.

In fact, Mr. Death -- in shape and deed -- is a reminder of the natural order.

My wife, a psychologist and therapist, often reminds me of her belief that virtually all Twilight Zone episodes concern Rod Serling’s fear of impending death or lost youth. So perhaps it is no surprise that Mr. Death is the only continuing character in the writer’s most famous canon.

Uniquely, Mr. Death is never physically depicted on The Twilight Zone as a fearsome “Grim Reaper”-styled or “Charon”-type creature, but rather as a human being who appears, well, relatively mundane.

He’s a well-groomed, Don Draper-esque businessman (Murray Hamilton) in “One for the Angels,” a handsome police officer (played by Robert Redford, no less…) in “Nothing in the Dark” and an amused, smiling Hitch-hiker (Leonard Strong) in the scariest episode of the bunch, “The Hitch-Hiker.”

No matter how, specifically, Mr. Death appears to his prey in a physical sense, he is first greeted with the emotions of terror, dread and disbelief.

In “One for the Angels,” an almost-seventy year-old street peddler, Lou Bookman (Ed Wynn) is shocked to learn that Mr. Death has scheduled him for “departure” at midnight. He categorically refuses to accept that Death has come for him, and then attempts to find a technicality in Death’s “law” that will allow him to remain on Earth.

In “The Hitch-hiker,” a woman, Nan Martin (Inger Stevens) on a cross-country trip has (unknowingly) died in a car accident, and keeps seeing the same Hitchhiker appear on the open road before her. She grows to dread seeing this figure, and the fear that she feels – and which the audience also feels – is a throat-clenching one. 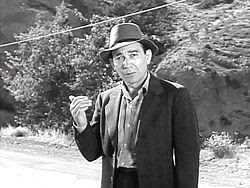 Who is this grinning stranger?  What does he want?  Why is he stalking her?  Why does she keep seeing him?

In “Nothing in the Dark,” poor old Wanda Dunn (Gladys Cooper) has spent the last few years of her long life locked away inside a dark, condemned basement apartment. She steadfastly refuses to reckon with the outside world – or any outsiders – for fear that Mr. Death will come for her should she open her door even a crack.

All three cases reflect a similar notion: these protagonists steadfastly attempt to ignore and defy the fact of their own mortality, specifically through the recognizable and nearly Kubler-Ross-ian stages of bargaining (“One for the Angels”), denial (“The Hitch-hiker”) and even anger (“Nothing in the Dark.”)

But by denying and rebelling against death, in fact, The Twilight Zone reminds us that these individuals may be denying the vibrancy of life itself…the meaning of our moment-to-moment existence. 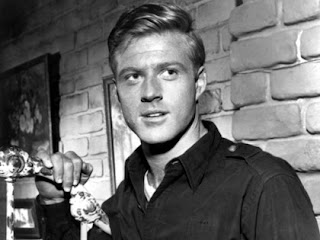 The protagonists soon learn the error of their ways.  By denying Mr. Death, Mr. Bookman causes an unfortunate chain reaction. Since Death can’t take him, the personification of mortality arranges to take a little girl, Maggie, in his place. Bookman attempts to trick Mr. Death and delay him from this deadly rendezvous, in the process fulfilling a life of dream of making a “big pitch…one for the angels.” He knows that the vetting of this pitch will result in Mr. Death taking him from our mortal coil, but Mr. Bookman is able to see and detect a value greater than his own ending at this point: a little girl’s continued survival.  He sees detects how precious life is, especially for the very young.  He has already lived; she has not.

Nan Martin’s epiphany in “The Hitch-hiker” is that death has been her co-pilot all along, at least since her accident. Mr. Death thus represents a force she can’t escape from, no matter how fast she drives or how much highway her car covers. And this realization too, reflects our human condition. We’re all mortal, and death is part of the natural order of life. In the end, we can’t outrun it.

Old Ms. Dunn in “Nothing in the Dark” learns that her fear of death has cordoned her off from the rest of humanity unnecessarily.  She has tried so hard not to let Mr. Death into her apartment that her life has hardly been worth continuing, or living.  What is life if it is lived in perpetual fear of “the dark.”

When Mr. Death “wins” -- as death inevitably wins -- he is not a gloating, cackling, monstrous victor.  Instead, he’s charming, and sometimes downright soothing. He politely informs Mr. Bookman that “he’s made it,” meaning he’ll be going to Heaven. He tells Nan Martin, without irony that she is “going” his way (a foregone conclusion at that point). And finally, Death offers beautiful, comforting words for Ms. Dunn:

“You see. No shock. No engulfment. No tearing asunder. What you feared would come like an explosion is like a whisper. What you thought was the end is the beginning.”

That last line suggests Mr. Death’s third “gift.”First he brings fear, then acceptance and finally…transcendence?  Mr. Bookman will go to Heaven…to join the angels, no doubt. Nan Martin too is being taken on a continuing journey (destination: unknown…), and Ms. Dunn faces not annihilation, but what Death describes enigmatically as “a beginning.”

Thus in all three Twilight Zone episodes featuring Mr. Death there exists, at least a little, the specter of hope, of an existence beyond this mortal coil where humanity can find something…different. Interestingly, other episodes of the series dwell on what that something different may look like (“A Nice Place to Visit,” for instance)

But for these three Mr. Death episodes, the most important thing to focus on is the paradigm he represents. I call it the inevitability of mortality and the natural order inherent in death. 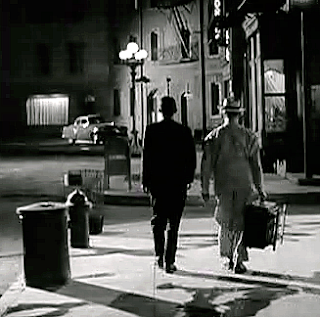 In some horror films, such as Final Destination (2000), death is viewed as an ominous, vengeful, dark force. What I enjoy so much about The Twilight Zone Mr. Death episodes, however, is the Grim Reaper’s obvious humanity. He is by turns gullible (“One for the Angels”), jocular (“The Hitch-hiker”) and gentle (“Nothing in the Dark”).

In other words, when Death comes a calling for human beings, The Twilight Zone promises that he will arrive in forms that we automatically understand, recognize, and can relate to.

The only proper end to a human life comes from a death that is also…human.

Email ThisBlogThis!Share to TwitterShare to FacebookShare to Pinterest
Labels: essay, The Twilight Zone