Blake's 7 to be re-booted next? 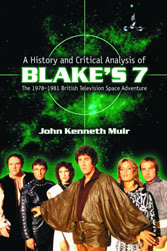 IndieWire is reporting that Casino Royale (2006) director Martin Campbell has signed a deal to launch a TV re-boot of Blake’s 7 (1978 – 1981), the cult-TV series concerning a band of space rebels fighting a totalitarian Federation from aboard an alien ship of incredible technology, the Liberator.

Of course, I’ve read probably five or six times over the last decade about attempts to re-launch Blake’s 7, either as a cartoon, a film, or a new TV series, and nothing ever seems to happen.  I wonder if this attempt will be any different.

And as I noted in an interview on Genre-tainment last week, the problem with rebooting Blake’s 7 now is that Firefly (2002) – a great series – already revived and reflected many aspects of the Terry Nation legend.  So the new Blake’s 7 will not only need to genuflect to the original program, it will need to stake out territory that differentiates itself from Firefly.

I just wrote a post about remakes here on the blog, and noted the reasons why they aren’t always desirable. But I also wrote about the fact that I’ll review each remake on a case-by-case basis.  I stick by that.  Also, I did write, way back in 1999 -- in my book about Blake’s 7 -- that a big-budget remake with new special effects and a focus on the Dirty Dozen/Robin Hood aspects of the legend could indeed prove pretty amazing.

Furthermore, I deeply miss space adventure on television. It’s been absent since the cancellation of SGU (2009 – 2011), and thus the thought that either Space:2099 or Blake’s 7 – or both – could be airing soon fills me with more hope than despair…at least at this point.

If you’re interested in learning more about the original Blake’s 7, check out my book on the subject, available here.
at July 23, 2012