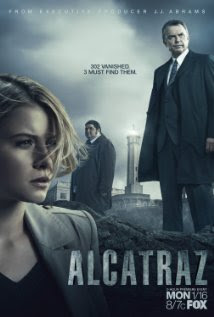 To describe Alcatraz in a convenient shorthand, the new sci-fi mystery series from creators Elizabeth Sarnoff, Steven Lilien, Bryan Wynbrandt and executive producer J.J. Abrams is a lot like Brimstone (1998) meets Lost (2004 - 2010).
Don't remember Brimstone?  If not, a true shame, because it is worth remembering.
Brimstone was a terrific but short-lived Fox horror series (that aired on Fridays with  Millennium) and concerned a laconic cop (Peter Horton) working with Satan himself (John Glover) to send back to Hell some 200+ demon prisoners who had escaped from the underworld.
Each week, there was a a different prisoner to catch, each with his or her own story  and unique modus operandi.
What made Brimstone authentically great, however, wasn't necessarily the somewhat repetitive premise, but rather the scintillating chemistry between the stars, and the fact that the series dwelt much on the personal life of Det. Ezekiel Stone (Horton), who had also been a prisoner in Hell himself, and returned to Earth to find that his wife (Stacy Haiduk) had moved on.
I wish the series had been more popular, or that Fox had shown a little faith in it and given it more time on the air.  One of these days, if I can get my hands on all the episodes, I should cult blog the series as I'm currently doing with The Fantastic Journey.  An official DVD set would sure be nice.
But back to Alcatraz.  The series premise is eerily similar.  In March of 1963, Alcatraz was closed and "officially speaking" all the prisoners were transferred to newer facilities.  But "that's not what happened.  Not at all."  Instead, in some kind of Philadelphia Experiment way, all the prisoners disappeared...never to be seen again.
Until now...
For some reason, these deadly criminals are re-appearing in 2012, and wreaking havoc in nearby San Francisco.  The prisoners not only seem to be following their own modus operandi, but appear to be working for some unknown group or conspiracy, in furtherance of some diabolical agenda.  They haven't aged a day since 1963, and appear to be performing tasks for some unknown overlords.
Working to apprehend the 300+ criminals is police detective Rebecca Madsen (Sarah Jones) and her partner, author and geek Diego Soto (Jorge Garcia).  They work for the mildly sinister Emerson Hauser (Sam Neill), who was a guard at Alcatraz the night the prisoners vanished from sight and knows much more than he is currently revealing.
So thus far, each week...another prisoner to catch, each with his distinctive methods.  "Ernest Cobb" was the Wichita Sniper, for instance, with a pattern of killing three innocent victims every three days, as per the second episode.  He gets caught in the second episode.
The Lost comparison comes into play because Alcatraz, at least in its pilot and first regular episode (the aforementioned "Ernest Cobb") heavily involves character flashbacks.  We see the prisoners' time on Alcatraz before disappearing, for instance, which serves as clue to the larger mystery.  The overall setting -- an island filled with temporal mysteries -- also clearly harks back to the earlier Abrams series, as does (the inspired_ casting of Garcia.
Although Alcatraz is mired in familiar elements from Brimstone,  Lost and about a dozen police procedurals currently on the air, I must admit I found it  modestly intriguing, and it held my interest for two hours  I was particularly gratified in the casting of Sarah Jones as Madsen and Garcia as De Soto.  They are an unconventional but intriguing pair, cast for their solid acting abilities, not merely their looks.  In fact, I found Sarah Jones quite fetching.  She's not traditionally beautiful (though she is lovely), yet she projects a distinctive personality and quality of reality that I appreciated.  Her casting reminded me a little bit of Gillian Anderson on The X-Files.  She's a woman who -- the more you look at her and spend time with her -- the more you see her inner and outer beauty.
What's the point?  Well, even with all its derivative qualities, I sense that Alcatraz may be worth sticking with simply for the character interplay.  The performances of the actors and personalities of the characters may overcome some of the admittedly routine material.  That's my hope, anyway.  Sometimes watching a TV show isn't about a premise, or about a particular narrative, but about spending time with people who intrigue you.
In general, I must admit, I also found the pilot of Alcatraz smarter than anything I  ever saw on the re-made V, Terra Nova or Flash Forward.  Again, I realize that this compliment is like being voted the nicest inmate in prison (on Alcatraz?), but I suppose it's something.  Watching Alcatraz, I didn't feel that my intelligence was overtly being insulted (as was surely the case with both V and Terra Nova).
My wife, who watched both the Alcatraz pilot and "Ernest Cobb" with me was not so excited by the possibilities of the program.  When I asked her what bothered her, she stressed J.J. Abrams' involvement and noted her fear that Alcatraz was going to lead us around by the nose but never truly come together; that the central mystery was never going to be resolved satisfactorily.
Good point.  I hope the show doesn't just lead us on.  I hope it goes somewhere amazing; somewhere that is internally consistent, makes sense, and really wows the audience.  Let's have not only a grand mystery...but a grand, mind-blowing investigation and resolution too.