Television and Cinema Verities: In the Words of the Creators # 2 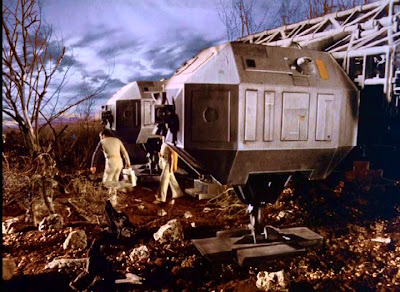 "It's interesting, but the thing that is pinpointed as the weakness of Space: 1999, the premise, is in fact the stepping stone into everything that happened, all those inexplicable things. And if you take the even larger arc view, you seem to learn more about the series.
In your book, you spotted an overall arc, and I think you are right. It is there, but it has this almost unconscious kind of sweep. On most normal TV, the writers look for the purpose of it all, what is the point of it all.; I think on Space: 1999, it is nearly subliminal. The very circumstances of this story, of this epic journey, became, I believe, an unconscious arc. Had we been aware of it, perhaps we would have taken on a much more directed theme. Unconsciously, we started seeing similarities and patterns, and a way things could happen. The further into the show we got, the more we mirrored the Alphans in their situations, because it was happening to us on that very level. That carried over into the stories, the way in which the humanity of the thing unfolded."
- Space: 1999 story editor and writer Johnny Byrne (1935 - 2008) discusses transforming weakness into strength in storytelling.  From an interview first posted on my old web site.
at January 16, 2012