Collectible of the Week: Star Trek: The Next Generation action figures (Galoob; 1988) 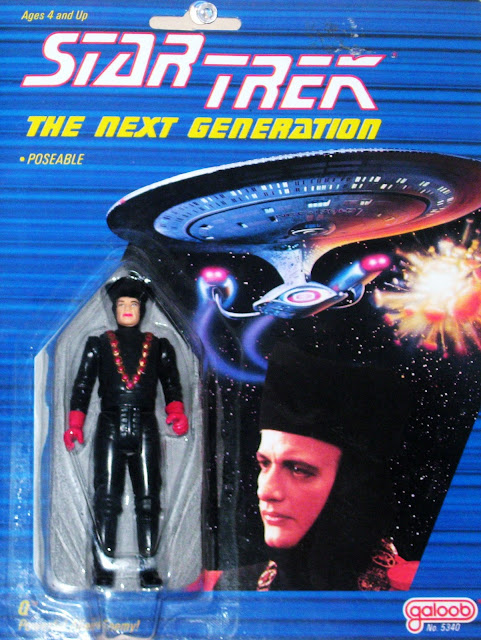 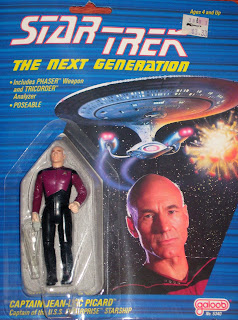 This year is the 25th anniversary of Star Trek: The Next Generation, and I've been featuring episode retrospectives here on the blog to celebrate the occasion.

Today, I want to diverge from that mission a little bit and remember the first line of toy action figures from the program, which were released in 1988 (near the end of the first season) and produced by Galoob.

Years later, of course, Playmates produced a line of figures based on the series that far exceeded Galoob's in terms of selection and popularity.  But the Galoob Star Trek: The Next Generation figures remain cherished collectibles for me.

In part, this is because I remember the excitement and anticipation accompanying the premiere of Star Trek: The Next Generation -- the first new Trek series since 1973 --  and the thrill of seeing toys and model kits on the market anew.   My sweet and loving mother promptly ordered all the crew action figures for me, as well AMT's model kit of the Enterprise-D from a toy vendor in Florida, and I still remember the thrill of the toys arriving in the mail one afternoon 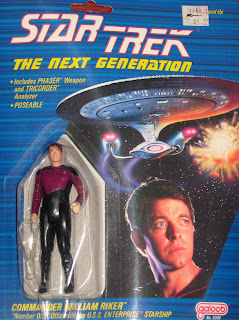 Six crew members from the Enterprise-D were included with the first Galoob release in 1988.  These included Captain Jean-Luc Picard, Commander Will Riker (still beard-less at this point), Lt. Commander Data (in both golden speckled face and blue face variation, for some reason...), the ill-fated Lt. Tasha Yar, Lt. Geordi La Forge (before he became chief engineer), and Lt. Worf.

These crew figures are all very much "show accurate" to employ a popular phrase, right down to the middle crease or ridge down the middle of their first season Starfleet uniform tunics.  Also,  the figures, like their namesakes, were of different heights and builds.

The likenesses to the actors are also quite good, in my estimation.

Each of the crew members came equipped with a phaser 2, Dustbuster variation (the one seen in nice close-up in "The Arsenal of Freedom") molded in hand, and a tricorder (with strap) to sling over their shoulders.  I suppose the latter point was actually an inaccuracy, as characters only carried tricorders on straps in the Original Series, not in The Next Generation. 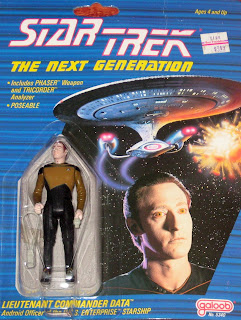 In addition to the stalwart crew members, Galoob released a group of early first season villains to challenge the crew, including Q in his judge's robes from "Encounter At Farpoint," the Ferengi from "The Last Outpost" and two singularly unmemorable races from "Lonely Among Us:" The Anticans and Selay.

The line didn't stop with action figures, either.  Galoob also produced a Shuttlecraft Galileo vehicle for the Enterprise team and a neat but show-inaccurate Ferengi fighter for the bad guys.

A smaller, die-cast metal Enterprise-D was released, and it boasted the capacity to separate the saucer section.  Also released was a phaser one toy that acted as flashlight when activated.

Left widely unproduced and sold were planned figures, including a Romulan (seen in "The Neutral Zone") and acting ensign Wesley Crusher.

I also vividly remember that the mail-order vendor from whom we purchased the available toys also offered for a time two or maybe three cardboard play sets, one of the Enterprise interior, and one -- if memory serves -- of the inhospitable planet surface from "The Last Outpost."

Alas, those sets were never produced, and my money was refunded.  I would love to see photos of these play sets today, as I've become quasi-convinced over the long years that I hallucinated them.  Only a Toy Collector magazine article from 1996 confirms I haven't lost my mind...

As I've written before, we normally associate Star Trek toys with Mego and Playmates, but I've always appreciated the Galoob line quite a bit.  The action figures look great hanging on my office wall, and make a nice counterpoint to the larger, somewhat strange-looking Playmates figures. 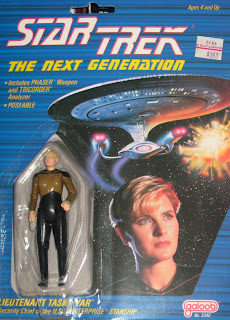 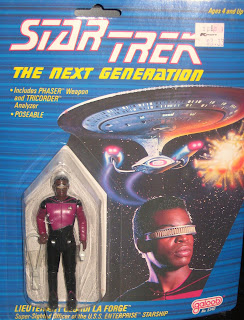 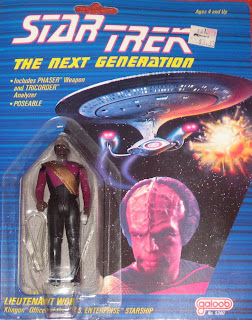 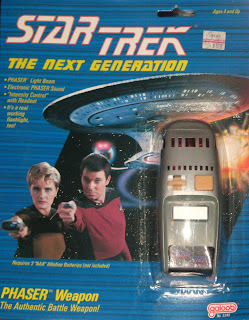 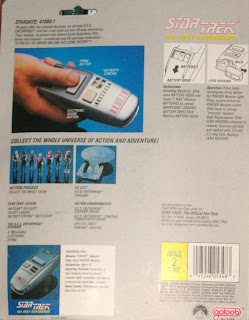 Email ThisBlogThis!Share to TwitterShare to FacebookShare to Pinterest
Labels: 1980s, collectible of the week, Star Trek: The Next Generation