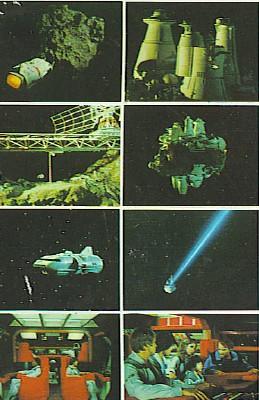 "Welcome to the most magnificent achievement in space, the man-made planetoid...Space Academy...founded in the star year 3732.

Here we have gathered young people from the farthest reaches of the known worlds. They have been chosen for their unique abilities, and are being trained to cope with the mysterious, the unknown, the unpredictable dangers lurking in the vast darkness of space."

With that opening narration, provided by Lost in Space's Dr. Smith, Jonathan Harris, so began the live-action, 1977 CBS TV series from Filmation (and producers Norm Prescott and Lou Scheimer), entitled Space Academy. Created by Allen Ducovny, the series involved a group of cadets manning an asteroid complex called - naturally - Space Academy. Their teacher, mentor and commanding officer was the kindly, patient Isaac Gampu (Harris), and the group consisted of an eclectic group of students.

There was Chris Gentry (Ric Carrot), a hot-shot blond pilot who could "mind link" with his telepathic sister, Laura Gentry (Pamelyn Ferdin). Chris's love interest was another cadet, the dark-haired Adrian (Maggie Cooper). The headstrong Asian, Tee-Gar Soom (Brian Tochi) and African-American Paul (Ty Henderson) rounded out the diverse group. Watching over them (in case things got out of hand...) was a diminutive robot called Peepo.

In the first episode of Space Academy, "The Survivors of Zalon" (written by Lynn Barker and directed by Jeffrey Hayden), a confused Adrian detects an unusual "burst of red" on her computer monitor while scanning the mysterious planet Zalon, which is due to explode in just 48 hours. This means that there could be life on Zalon, even though the last survey two years indicated no life-forms existed there.

Gampu authorizes a (quick...) visit to Zalon's surface, and accompanies the cadets to the planet's barren, orange-hued surface, a trip they take via Academy shuttle, the sleek craft known as a "Seeker." But a strange scarlet energy field cripples communications with the Academy, and Gampu drops off the others on the surface while he returns to space to attempt to re-establish contact.

On the planet below, the intrepid cadets discover a young, flute-playing waif, a curly haired orphan (Eric Greene). He has no memory of how he arrived on Zalon, but the energy field from space has provided for his continued existence in return for his care of two small, glowing crystals. It turns out that these two orbs are the energy field's young ones. The destruction of the planet Zalon is actually a critical part of a "great life transformation process" for them, and the cadets- by collecting the crystals as samples - are interfering.

The crimson energy field in space permits Gampu to retrieve his cadets before the destruction of Zalon, provided he lets the evolution process of their kind continue unimpeded . Gampu agrees and returns to Zalon's surface. There, he agrees to adopt the waif - whom he names Loki, after the Norse God of Mischief. It turns out that Loki will prove quite a handful, since the youngster boasts "special vision" (the ability to see through walls...) and teleportation powers.

Space Academy comes from the same tradition that gave us great series like the live-action Land of the Lost. It's a show designed for children that aired on Saturday mornings, but it's no cartoon or time-waster. In fact, this series featured superb production values and special effects that were state of the art for 1977. The Seeker shuttlecraft, (though based on the Ark II design...) was represented both in full-size mock-up and highly-detailed miniature. In "The Survivors of Zalon," (which first aired September 10, 1977) the outer space and miniature sequences (supervised by Robert A. Maine and Chuck Comisky) are extensive, and accomplished with remarkable skill. There are no less than four in-depth shots of the craft departing from the Academy's hanger and heading out into space. These shots, so effective here, would also be repeated as "stock footage" in future episodes. Each episode of the series was 22 minutes long (to accommodate a half-hour block) and shot in 35mm, an unusual decision since most of its contemporaries were lensed on 16 mm.

Thematically, Space Academy is straight from the Star Trek/Space Patrol/Tom Corbett, Space Cadet school or morally-uplifting, "up with humans" space adventuring. The acting is slightly over-dramatic, as it is aimed at children, but the stories, including this one, reveal an attempt to grapple with some grown-up genre concepts (including alien biological diversity, evolution processes and the like), as well as "valuable" moral lessons (peacable first contact, general decency to others). The series had an educational advisor from U.C.L.A., Dr. Gordon L. Berry, and it's clear there was an effort to make the series educational as well as highly entertaining.

Though this is a show for kids, it's one of the Saturday morning TV series that (like Land of the Lost) adults can get into...given a little patience...especially if one is willing to overlook the "gee whiz!" enthusiastic demeanor of the over-enthusiastic (but solid) cast.

Saturday Morning TV was a wonderful facet of our pop culture in the 1970s and 1980s, and I miss it dearly in our corporate contemporary culture, so I decided I wanted to feature it on the blog as a regular feature (every Saturday). Again, I'm not arguing that Space Academy is artistic or great TV, only that it was fun, and that I've always remembered it with fondness. Im sure that - along with Land of the Lost, Jason of Star Command, and The Super Friends, it had some deep impact on the way in which I view the world as an adult. It's morally valuable, fun and for the 1970s, exquisitely-rendered.

And there are lots of cool spaceships and explosions.