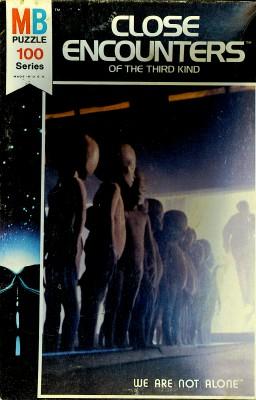 When I gaze back at all the movie and TV-related merchandise I owned as a child (and retain now, as a crazy collector...), I'm struck by how times have changed. If - as a kid - I wanted to relive the adventures of Moonbase Alpha, the starship Enterprise, Starbuck and Apollo on Battlestar Galactica or the crew of the Palomino in the Black Hole, there were a whole lot of ways to do it...but always ones away from the headache-inducing glare of the TV set.
Of course, there were novelizations. I dug those. Comic adaptations too. But beyond those literary and graphic re-tellings of favorite tales, my generation also had a host of other optiions. There were "story" record albums (like Power Records), colorform playsets, Amsco cardboard playsets, model kits, board games and the like - many of which I've featured right here on my blog. Today, thanks to DVD (which I do love...a lot) it seems that kids who are fans of popular movies and TV shows could just...watch the popular movies and TV shows on DVD. Again and again.

While this is wonderful, I must admit I often question if today's generation of kids is actually only learning to be more passive and somehow less creative. When my generation played, we had all of these other ways of creating our own adventures, rather than just flaking out on the sofa. Now understand, I ain't dissing DVD. This is just a thought. I mean, we were inspired by TV shows like 1999 or movies like Star Wars, but ultimately, we had to take that inspiration and continue the adventure on our own (and wait hopefully for a rerun or a sequel...) Today, the DVD is just always handy. On the shelf.

Which brings us to my retro toy thursday flashback, number 12: Jigsaw Puzzles. When I was a kid, I loved to assemble jigsaw puzzles, especially those related to my favorite things (Star Wars, Planet of the Apes, Star Trek, Space:1999 - you name it), and a number of co 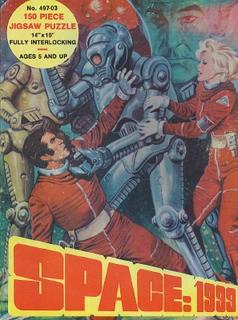 mpanies in America marketed a variety of media tie-in jigsaw puzzles over the years to interest kids in this (I believe...) therapeutic pastime.

HG Toys (Long Beach, NY 11561) not only produced Star Trek jigsaw puzzles in the 1970s (ones with 300 pieces), but the company also held the license to my favorite show, Space:1999. The Space:1999 puzzles came in small square boxes or - interestingly - cylindrical containers. There were three puzzles created for Space:1999. One featured the famous art/poster of the series, itself with leads Martin Landau, Barbara Bain and Barry Morse standing nefore a moon (exploding!) and an Eagle flying by overhead. There was also a second puzzle, featuring Commander Koenig (Armed with a laser rifle) and Helena Russell on some strange alien planet, between weird forcefield gate. Pictured here on the right, you see the third Space:1999 puzzle from HG Toys, number 497-3. This 150 pc, 14" x 10" jigsaw puzzle features Koenig and Bergman locked in combat with deadly-looking alien robots. Those robots were never actually seen on the TV show, but the puzzle was sure cool! 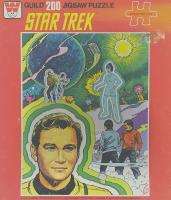 By the late 1970s, Whitman (Western Publishing company, Inc., Racine, Wisconsin, 53404) was producing Star Trek puzzles based on the original 1966-69 TV series, including a yellow one (depicting a shuttle landing) and a red one (see photo, left). Pictured here is the red one, depicting a strange adventure in which the characters all appear to be glowing for some odd reason. This "Guild 200 Jigsaw Puzzle" features over 200 fully interlocking pieces. It is 14" x 18" (or 36 cm x 46 cm).
The license changed hands again by the time of Star Trek: the Motion Picture. By 1979

, Milton Bradley was selling 250 piece jigsaw puzzles based on the film, for ages 8 and up. The dimensions on these were 19 7/8 by 13 7/8 inches. Included in the series were three puzzles: Sick Bay (which you see pictured right), Enterprise and "Faces of the Future."

In the summer of 1977, Star Wars changed everything, and the floodgates of science fiction merchandise opened. The Star Wars saga produced half-a-dozen puzzle series. Some were 140-piece puzzles, others 500, others 1,000, some even 1,500. From Star Wars, there were at least ten puzzles, featuring Luke Skywalker, a battle in space, the droids, Han Solo and Chewbacca, the trash compactor, the Tusken Raiders, the Stormtroopers at Mos Eisley and more and more. One of the most beautiful of the puzzles depicted Darth Vader and Ben Kenobi crossing light sabers in profile; the Millennium Falcon in the background. Other puzzles: The Cantina Band and Jawa Droid Sale on Tatooine.

When Star Wars proved so successful not just as a film and cultural touchstone, but as a marketing enterprise, every new sci-fi film and TV show soon had its own series of jigsaw puzzles. Even Steven Spielberg's (very adult...) space-related movie, Close Encounters of the Third Kind had a jigsaw puzzle, one depicting the diminutive aliens and a human exiting from their landed craft. In one corner read the legend "We Are Not Alone." The Close Encounters puzzle consisted of 108 pieces, for ages 5 to 10. It's pictured too. 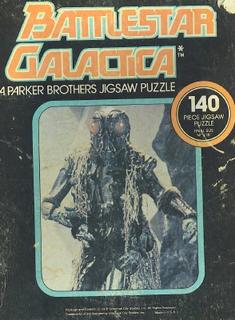 The last year of the disco decade, 1979, brought not only Star Trek: The Motion Picture, but Walt Disney's magnum opus, The Black Hole. Whitman released two 500 piece "fully interlocking" jigsaw puzzles with stills from the movie. One depicted the crew of the Palomino (including Yvette Mimieux, Robert Forster and Joseph Bottoms) battling Sentries and racing for the Probe Ship, the other dramatized a moment between the villains: Maximillian and Dr. Reinhardt (Maximillian Schell). You can see the former below. 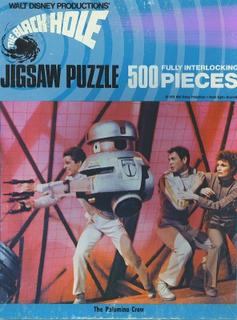 The one puzzle from this year that I DON'T OWN (and want desperately), came from the Ridley Scott film, ALIEN. H.G. Toys released "giant jigsaw puzzle" that was 3 feet tall (and advertised as "poster sized!") It showed artist renderings of the titular alien, Parker and Ripley, as well as a view of three suited astronauts (Kane, Dallas and Lambert) about to enter the derelict. I bet these sell for a pretty penny today, and I've never even seen one in the flesh. 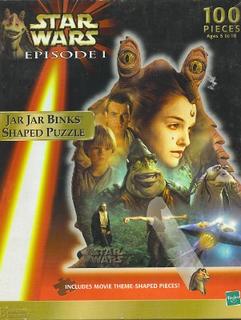 I know that jigsaw puzzles are timeless, and that people still play with them. In fact, I even own a few from Star Wars: Episode 1: The Phantom Menace (pictured right), which was released in 1999. It's Jar-Jar shaped! (No!!!!!!!) But in the old days of the 1970s and 1980s, puzzles were actually a creative substitute for watching your favorite movies and TV shows. Anybody out there else remember fun days (especially if you were home sick from school?) assembling movie and TV-related jigsaws?