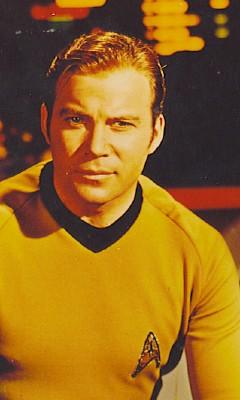 I suppose you either get William Shatner, or you don't. I do get William Shatner. I love William Shatner. He's an icon to me and many in my generation.
Here are a few reasons for my man-sized (but hetero...) Shatner lovin':
1. He starred in a 1970s movie called Impulse lensed in the "language" (ahem...) Esperanto.
2. Remember when he sang "I Want To Sex You Up?" at some music awards show back in the early 1990s? Prince was there. Guns'n'Roses was there. But who does everybody remember? William Shatner!
3. KHAAAAAAAAAAAAAAAAAAAAAAAAAN! Has there ever been a better cinematic spasm than Shatner's energetic scream to the Eugenic Superman in Star Trek II: The Wrath of Khan?
4. In the 1977 movie Kingdom of the Spiders, Shatner is attacked by tarantulas, and lets himself be covered by dozens, maybe hundreds of the buggers. There are a whole lot of reasons I like this movie, but the fact that Shatner let himself be buried in live spiders - makes the movie scary. It sells the threat in a way that stunt doubles just can't. It could have been different. In Frogs (1972), Ray Milland never got in THE SAME SHOT as the attacking frogs. But no, Shatner goes for the gusto here. In fact, I think he enjoyed rolling around with the spiders a tad too much. I highly recommend this movie...
5. In last year's hysterical reality TV show, Invasion, Iowa, Shatner had the audacity to have some corn-fed local girl (about 18 years old, I think), be his love interest in the fake sci-fi movie he was "producing." She actually spoke the following line to Shatner: "I would rather carry your seed, than the seed that destroys the universe." Every man dreams of hearing that.

6. Denny Crane.
So what's up with my public expression of love for William Shatner? Why now? Well, I've always adored the guy, but my friend Chris, over at his blog, Wat Tambor's War Journal, posted a really thoughtful meditation on Monsieur Shatner this week, and it got me thinking about Captain James Tiberius Kirk and the actor who so ably portrayed him.
Here's a snippet of "William Shatner as a Metaphor for Our Lives":
I am not ashamed in the least to admit that I am a William Shatner fanatic. I think the man, his career, and his personality are more compelling than any other celebrity out there. I will watch anything the man does. (Yes, one of these days I will get around to watching Groom Lake).

I also firmly believe that his charisma is a large part of why Star Trek is so successful and enduring. Jeff Hunter was a fine actor, but come on folks, it just wouldn't be the same without Bill.

Something struck me about Bill and his career last week after I watched the newest Boston Legal. He is the only actor I can think of who has explored the different stages of his own life through his high profile performances. Bill has a way of directly addressing where he's at in his real life through his fictional characters. In our current youth-obsessed culture, it is comforting to see that there is life and contemplation beyond your twenties.
So somebody tell me, does Patrick Stewart get this kind of love?
at October 20, 2005