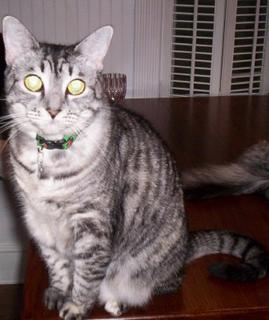 Today is a sad cat-blogging day...
Yesterday, we took one of our beloved cats, Ezri, to the vet's office to see what we could do about a sudden outbreak of kitty acne on her chin. What the doctor found, to our surprise and terror, was that Ezri has a heart murmur (a "squishy" sound in addition to the regular thump-thump). I took her to a specialist yesterday afternoon and Ezri's chest was shaved, and the poor thing was given a 90 minute ultrasound (with doppler). What the doctor found is that Ezri's mitral valve has "thickened" mysteriously, and is leaking blood. This is bad (though it could have been worse, had Ezri's aorta been damaged...).

The good news is that Ezri is not lethargic, that Ezri's blood pressure is good, and that the blood leak volume is low, but the bad news is that she could be suffering from the beginning of a heart disease that could cut her down in her prime (she's only six, for chrissake).

What we're hoping is this: the outbreak of acne and the thickened valve are symptoms of the same thing: some form of bacteriological infection. If that's the case, we can treat her with antiobiotics and in six weeks, get her completely back to normal. Right now, she's taking her medicine, but we don't know what we'll be facing with her until December, after the regimen ends. The bad news is that right now - and for the future - Ezri's thickened valve could cause a blood clot, and therefore an infarction. That means she could have a stroke/heart attack at any moment and die. I pray that the antibiotics work fast and reduce the inflammation on her mitral valve. So if you love cats, please think a kind thought for my Ezri today!
at October 25, 2005