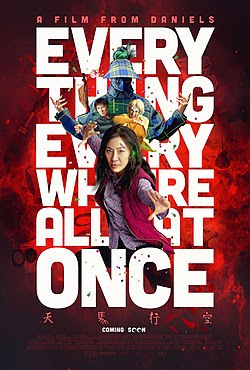 Who Knew IRS Audits Could Get So Bloody? - Everything, Everywhere, All at Once (2022)

I didn’t expect to write twice this week about colliding multiverses, but while Doctor Strange in the Multiverse of Madness (reviewed earlier this week) felt constrained, discombobulated, and cold, Everything, Everywhere, All At Once is a gonzo work of art: hilarious, ingenious, and filled with more heart than expected in a film of this genre.

We first meet Evelyn (Michelle Yeoh) as she watches her already sparse life disintegrate. Her meek husband Waymond (Ke Huy Quan) has filed for divorce. She can’t relate to her EMO daughter, Joy (Stephanie Hsu). Her laundromat business is going under, and an IRS Agent (Jamie Lee Curtis) is threatening liens on her property. Suddenly, in the elevator en route to the audit, her husband is no longer her husband. He’s another universe’s version of Waymond, sent to protect her from the grand villain who’s been killing many of the other universes’ Evelyns. Like Steven Strange, Evelyn is the multiverse’s only hope from collapsing. 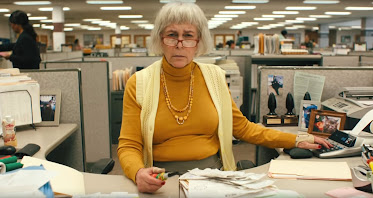 Without all the hype, walking into the film knowing writers /directors Daniel Kwan and Scheinert’s first film, Swiss Army Man — where Paul Dano journeys the woods with a dead but fully conscious Daniel Radcliffe — it’s obvious Everything, Everywhere, All At Once is not going to be standard fare. But even that cannot prepare the audience for the delirious, existential martial arts-dramedy mashup that ensues. The Daniels have created a visual orgasm of chaos, with Evelyn flipping between parallel lives, incorporating other Evelyns’ skills to protect herself and her family. The action sequences will recall the hysterical 2004 Stephen Chow movie Kung Fu Hustle, with its outrageous moves and slapstick martial arts choreography. Nothing is sacred, not even cute little dogs. Lesbians with hot dog fingers have tender moments, a raccoon subbing in for the rat in Ratatouille mentors a teppanyaki chef, and key tense moments focus in on whether a karaoke machine is a valid tax expense (personally, since it’s being used for a party inviting laundromat customers, I think the expense should have been allowed). And THEN there’s Jamie Lee Curtis. 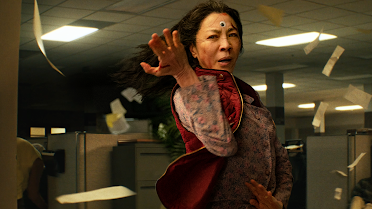 Dressed in eye-offending stale-urine yellow cardigans, too-tight butterscotch shirts, wide pants and a bowl cut, Curtis is a visual treasure as the IRS agent who has more than audits in mind for Evelyn.  Seeing Jamie Lee Curtis jump horizontally through the air like she’s filled with helium is a delightful image. Whether beating the crap out of Yeoh, tearfully leaving her lover as her jelly-like fingers wave in the distance, or having a sit-down heart-to-heart on a dark bench, Curtis gives her greatest performance in years. Hsu, who audiences will recognize (or completely NOT recognize) as Mei, the glamourous Casino boss in The Marvelous Mrs. Maisel, is devilish at times, youthfully nihilistic in others. She builds a beautifully layered relationship with Yeoh through multiple personalities — whether a terminator, a depressed daughter, a piñata … or a rock[!]. Who knew the film world was desperately awaiting the reemergence of Ke Huy Quan, Short Round in Indiana Jones and the Temple of Doom and Data in The Goonies? While spending years behind the screen, Quan returns as many fabulously diverse versions of Waymond. Quan embodies the affability of some, the bravery of others, but always the glowing kindness inherent in all variations. Despite a long paragraph of glowing recommendations about the supporting cast — and I haven’t even gotten to the fantastic James Hong as Evelyn’s stern, disagreeable father — this film belongs to Yeoh. She makes you care about each alternative Evelyn, and she fascinates as a woman given a new lease on life (or lives). A martial arts expert, Yeoh thrives in the action scenes, but really wins during moments of Evelyn’s quiet desperation. The movie may seem about EVERYTHING, but at its core, it’s about family, and Yeoh forms wonderful bonds with Hsu, Hong, and Quan. So that even though this specific version of the family may seem inconsequential and disposable, we hunger for them to  survive and rediscover each other.

In the third review of this week, The Unbearable Weight of Massive Talent, I compared that film to the dazzling works of Charlie Kaufman, stating it was a minor version of his greatest works. Finishing Everything, Everywhere, All At Once reminded me of the first time I walked out of Being John Malkovich. My brain stung but I was invigorated by the creative majesty. Films like Everything, Everywhere, All At Once rock your understanding of the world in which we live — and that is always a very good thing.