Guest Post: Doctor Strange in the Multiverse of Madness (2022) 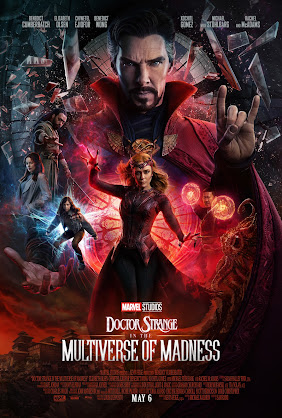 Next Time, Dr Strange, Enter a Multiverse That’s Coherent: Doctor Strange in the Multiverse of Madness (2022)

Doctor Strange in the Multiverse of Madness, the latest in the MCU, is a runaway train of a movie, one that doesn’t have time to see the trees or the landscapes as it comes shooting down to its point of impact.  Sam Raimi returns to the MCU for the first time since the third Tobey Maguire Spider-Man, and though he goes mad with fantastic visual images, the film itself never takes a breath to explain what in God’s name is going on.

Steven Strange (Benedict Cumberbatch) saves a young girl with the ability to skip between multiverses. America (Xochitl Gomez) came to our world specifically to warn Strange that an old friend filled with fury endangers all the multiverses. Wanda Maximoff/Scarlet Witch (Elizabeth Olsen), grieving for her two boys who only existed because she conjured them in the first place, leaves decimated worlds in her wake as she searched for the boys. 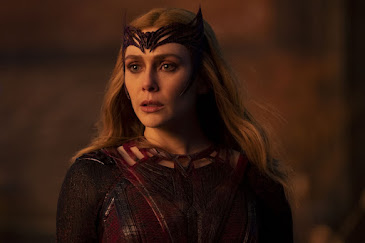 If Multiverse of Madness seems a bit out of sorts, it may be because it’s being released out of its natural order. Originally, in the days before anyone knew what COVID meant, Multiverse of Madness was to come between the inventive WandaVision and the ingenious Spider-men mash-up, Spider-Man: No Way Home, but a deadly disease saw an end to that. So now Dr Strange 2 was re-tailored to come after, and based on all the insanity Steven Strange participated in during Peter Parker 1, 2, and 3’s travails, one would expect shading, but instead, none of the lessons from that earlier film could be incorporated into this film, only a throw away comment to his young companion that Steven had experience in the multiverses thanks to Spider-Man.

The audience is constantly left feeling like they missed an episode. We’ve witnessed the evolution of Scarlet Witch, from her introduction as a tool for Ultron in the second Avengers movie, to a hero ready to save the world from Thanos in the Infinity Wars. Then for nine glorious episodes of WandaVision, we got into her psyche as she was manipulated and manhandled by the cunning Agatha (Kathryn Hahn, who from this moment on should star in EVERY movie and tv show ever made). The Wanda we left was grief-stricken and enraged, but there’s no transition to the serial killer Terminator who arrives fully-fuming in this film. There’s no soul in this character. She doesn’t seem to be reacting to pain, she just seems like a killing machine. When trapped, she smiles as she figures ways out, even if it means killing multiple heroes. But Wanda’s story is not the only issue. The entire film feels like they removed the plot and left only the action. Also, the audience spends time with new multiverse versions of characters in which we’ve already invested, like Christine (Rachel McAdams), and expects that we’ll quickly transfer that investment into multiverse versions who aren’t supposed to actually be the same person. 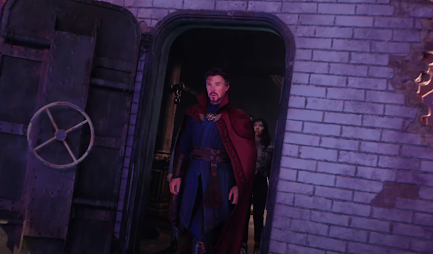 One of the great joys of the MCU is the interweaving of all the movies/tv shows/board games into each film, but it can get confusing if you miss one show (Inhumans or What If) and are scratching your head when Peggy Carter (Hayley Atwell) became The First Avenger or from where Anson Mount’s character Black Bolt arrived.

The ending, however, was a perfect spot to land. Screenwriter Michael Waldron wrapped up Scarlet Witch’s journey exactly where it resonated the best and was the smartest decision in the script.

Raimi’s visual jokes do remind audiences that the director is a genius. He catapults Steven and America stumbling through a dozen multiverses at once including:  a silent movie universe, a paint universe, and a comic book universe. There was also a great sequence of a camera zooming into one eye and then cross cutting to a zoom through the other. In a later sequence, Steven uses musical notes from sheet music lying around as weapons and then, as those note-weapons hit their target, composer Danny Elfman punctuates the sounds into the underscore.  In a visual wink to horror heroines driven mad by sadness, Raimi has Wanda walking around with blood dripping down in streaks from her hair like Chloë Grace Moretz in the poster for the remake of Stephen King’s Carrie.

Doctor Strange in the Multiverse of Madness is not a failure. It’s a miscalculation. It may have been rushed into production after COVID forced changes, to its own folly. Steve Strange is a fantastic character and Cumberbatch finds all the humor and geocentricism in the role. They, and this movie, needed more time to flourish.