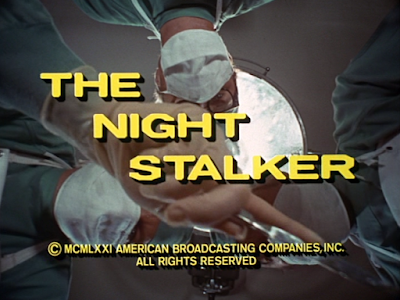 The Night Stalker, a TV movie first aired fifty years ago, on January 11, 1972, was -- and for many years after, remained -- the highest rated TV movie of a generation.
It also introduced a hero, Kolchak who returned in a second TV-movie, a TV series in 1974, and a reboot in the mid-2000s.
Our journey begins in Las Vegas in the early 1970's.
There, down-on-his luck reporter Carl Kolchak (Darren McGavin) is working for a rag called the Daily News under the thumb of editor, Tony Vincenzo. It seems Kolchak was once one of the great journalists of the day, but he's been fired more times than you can count, and is looking for that one earth-shattering story that will catapult him back to the big time in New York City. He shares these dreams with a local prostitute, Gale Foster (Carol Lynley), but she isn't holding out much hope.
In the latter half of May, however, a series of brutal killings are uncovered in Las Vegas. Four women are found dead, their corpses drained entirely of blood. And oddly, the coroner (Larry Linville) has found saliva in their wounds, indicating that an honest-to-goodness vampire might be the culprit.
Kolchak considers this avenue of investigation, but runs into a brick wall erected by the mayor and Las Vegas's chief law enforcement official, Sheriff Butcher (Claude Akins). They refuse to consider Kolchak's theory, and consequently more citizens die.
Finally, once the culprit is named - Janos Skorzeny - the police are unable to stop the 70 year-old man because bullets seem to have no effect on the oddly youthful assailant. Realizing it is up to him to put anen d to this nightmare, Kolchak locates the vampire's house, rescues Skorzeny's latest victim, and finishes off the vampire with a well-placed stake to the heart. But In order to keep the story quiet, Butcher prepares to charge Kolchak with murder...unless he leaves Las Vegas for good.
Kolchak does so, and also learns that Gale Foster has left town, never to be heard from again. 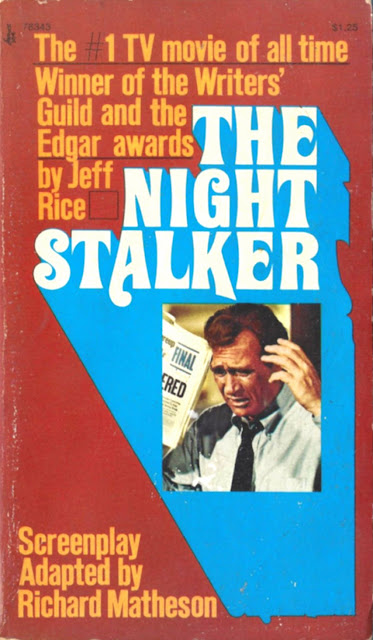 Richard Matheson (1926 - 2013) is a legitimate genre great, and as such penned some brilliant teleplays, including Duel (1973), too many Twilight Zones to name here and, of course, The Night Stalker.
In this project, he provides reporter Carl Kolchak with a real and individual voice, a stirring and interesting first case, and even a sense of humor. The late Darren McGavin (1922 - 2006) does the rest, playing up the role with a rat-a-tat delivery that is unmatched to this day.
Kolchak's not your typical TV protagonist, but rather a persistent voice for the truth, a fact which distinguishes him in this era of fake news. The Night Stalker introduces us to a man who lives on the edge, in a cynical time, and yet there is an optimism here that I appreciate, having a training in journalism. Embedded in Kolchak's DNA is the once-popular and common-held belief that one man can fight City Hall; that one man can make a difference. In the telefilm and follow-up series, Kolchak is always battling corrupt cops or politicians and trying (and often failing...) to get the truth out to the people. This was before the age of a corporate news business and a compliant media. Kolchak -- for all his failures as a human being -- is a sterling journalist and a paragon of virtue in the sense that he always follows a story...no matter where it takes him.
The made-for-TV movie's story itself -- about a vampire on the loose in Las Vegas -- remains more intriguing, perhaps, for what it doesn't directly tell audiences. Rather than spoon-feeding audiences the background information, there's plenty here that is just mentioned in passing. 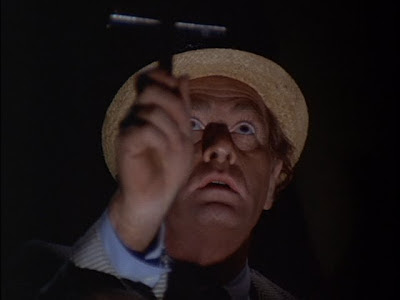 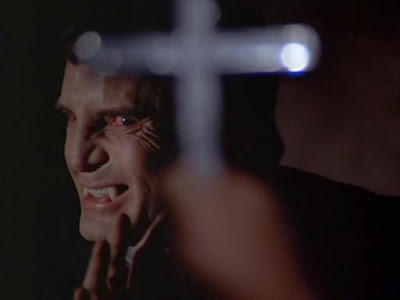 For instance, late in the story, Kolchak breaks into Skorzeny's house and finds an open traveler's crate. Inside the trunk, we see Skorzeny's disguises, and even some make-up. He finds face-paint and wigs, and instantly (but importantly, without comment...) we get a sense of the vampire's long history, and his travels from Berlin to London to Canada to the United States (as enumerated in a police press conference.)
It's just a nice little touch that acknowledges how a vampire could be immortal, and as a consequence of that life span, well-traveled to boot.
I also admire the artistic and efficient way this TV film was shot by director John Llewelyn Moxey. The opening shots are hand-held, on-the-spot views of a busy strip in Vegas at night, and the atmosphere is pure seventies, pure sleaze.
As a set-up for the first vampire attack in a dark alley, it's just perfect how quickly and cogently a sense of atmosphere is mastered with one tool -- a hand-held camera -- and one well-observed location (a crowded street corner.) It's an informative opening shot, and an atmospheric one too. The hand-held feel of the camera makes us feel tense immediately, like we're among the street walkers.  There's a feeling here that we're going to see an underside to an underside of Las Vegas.
Watching the tele-film, I also noticed how the soundtrack goes almost completely silent during Kolchak's long, tense exploration of Skorzeny's house. No mood music to speak of; very few sound effects, even. The sequence must have lasted a good four or five minutes, and when the music and sound effects did finally arrive (as Skorzeny returns home...) the transition from silence simply made the denouement all that more exciting.
One of the things that I will always love about Darren McGavin's Kolchak is the fact that we say he's a hero, but he really isn't a traditional, physical hero. As displayed here, Kolchak's great gift is that he speaks truth and common sense to power. That's a wonderful trait. But it's not exactly something that comes in handy while monster hunting. So he's vulnerable in a very sympathy-provoking way.
There's a great moment in this telefilm when Kolchak walks to his car at night. He sits down, starts driving, and then gets a sense -- just a sense -- that there's someone in the car with him.
He stops the car, jumps out in a panic, and learns that one of his informants has fallen asleep in the back seat. He's pissed off and humiliated that he reacted in such a fashion, and we get a laugh out of him. There's absolutely nothing heroic or grand about Kolchak's case of the creeps or jitters (or his embarrassment afterwards), but boy is it human, and therefore realistic. McGavin's humorous, honest and human portrayal greatly enhances the efficacy of the blood-curdling finale. 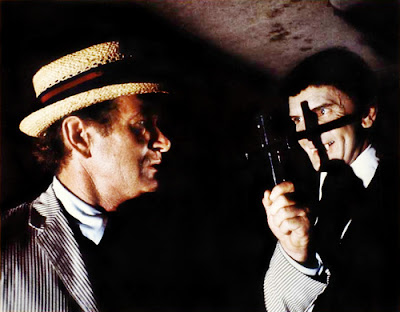 None of the action in the film would work half-as-well if McGavin were a more traditionally handsome, more physically "capable" kind of action-hero. As it is, we breathe a sigh of relief that he made it through the night! (Let alone a TV series and a series of "monsters of the week.").  His colorful hero has endured for half-a-century now.
at January 11, 2022

Email ThisBlogThis!Share to TwitterShare to FacebookShare to Pinterest
Labels: 50 Years Ago Today, Kolchak the Night Stalker