What's the Worst that Could Happen? (Commercial Flight Edition) 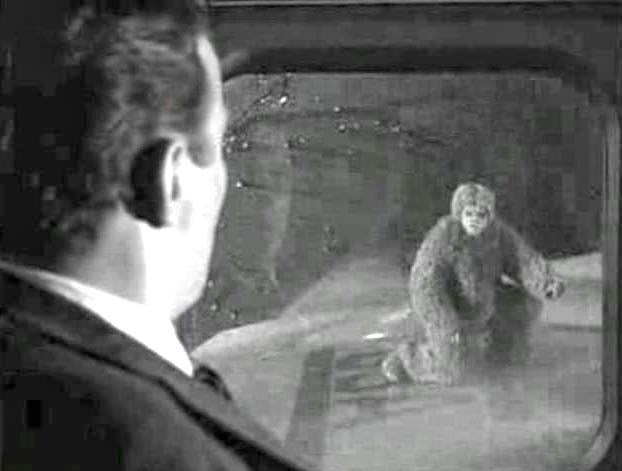 I must confess that I have never been very comfortable with flying.

The last time I flew, in fact, was in the year 2005, I believe. So I’m (happily…) going on almost fifteen years since I boarded a commercial air-liner.  I'd be happy to make it twenty.

Anyway, I don’t want to blame my aviatophobia on my mis-spent youth TV-watching, but there’s little doubt that cult-television, has, for decades, featured terrifying stories of flights imperiled, flights lost, and commercial air-liners crashed.

With that frightening thought in mind, here is a list of the seven cult-television commercial flights you hope you never end up queuing to board…

And yes, The Twilight Zone (1959 – 1964) features heavily on this list, since it re-visited the premise of doomed air-line flights fairly regularly. 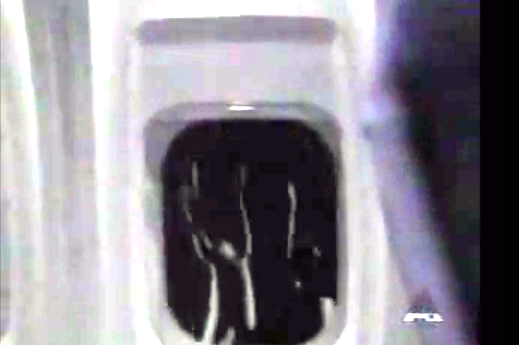 The short-lived The Others was a great horror series that should have gone on for many seasons, but one of its finest efforts was “Souls on Board.”  In this macabre tale, the protagonists -- a diverse team of psychics -- board a plane reputed to be haunted.  The team-members soon learned that the plane has been retrofitted with parts from Flight 390 which crashed…killing all hands aboard.  Now, the ghostly crew of lost Flight 390 haunts the new plane…

So imagine boarding a plane on a routine flight only to discover that: a.) the plane is built from crash scraps.  And b.) the salvaged parts are haunted.  How's that for flying the friendly skies? 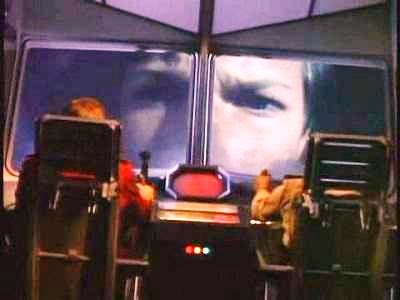 A sub-orbital ship, The Spindrift, encounters "solar turbulence" upon final sub-orbital approach to London. Before long, the small commercial vessel crashes on a strange world, and the crew and passengers encounter the peculiar dangers of this planet, namely giant spiders, cats, lizards...and (apparently) giant, hostile humans.

This is the premise of Irwin Allen’s final science fiction series Land of the Giants.  Again, a routine commercial flight leads to an unexpected danger, in this case permanent exile on a planet where you are, essentially, an ant, compared to the indigenous population. 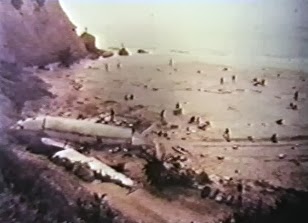 In the 1969 generation-gap series The New People (from Rod Serling and Aaron Spelling) a group of thirty or forty college students in the South Pacific on a "good will" trip are recalled to America because of international tensions.  Their plane goes off course in a pounding storm, however, and crashes on remote Bomano, where the U.S. has abandoned its Atomic Energy Testing Site.  The site is now a ghost town populated only by creepy human dummies.  “The New People “-- with no chance of getting home -- must start a new life with no adults, no government, and limited provisions…

So what starts out as a routine flight ends, essentially, in Lord of the Flies.  The only adult trapped in this nightmare, played by Richard Kiley, wisely dies before the end of the first hour... 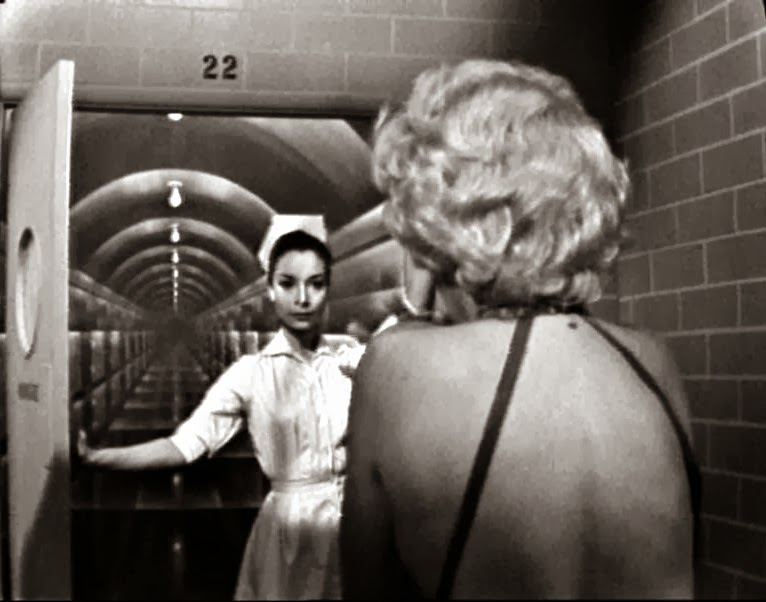 In this classic The Twilight Zone tale, Liz Powell, a dancer, has experienced for weeks a strange and terrifying nightmare about a morgue, a pleasant though sinister-looking nurse, and the number 22.

“Room for one more, honey…” the nurse repeatedly intones, offering a slot in the morgue.

After exorcising the fear of this baffling nightmare, Liz leaves the hospital, travels to the airport and prepares to board a plane.

But when she is about to board, Liz learns that this is Flight 22, and the pleasant stewardess intones -- wait for it -- “room for one more honey…”

Appropriately, Liz freaks out and leaves the tarmac.  Moments later, the plane explodes on take-off, killing all aboard.

Although shot on video-tape (as a cost-saving measure) this is one of the all-time classic Twilight Zone episodes, and one that many viewers still remember from the original airing.  Although my mother often explicitly recalls the terror of "The After Hours" and "Eye of the Beholder," it is "Twenty-Two" that terrified by Dad as a young man.. 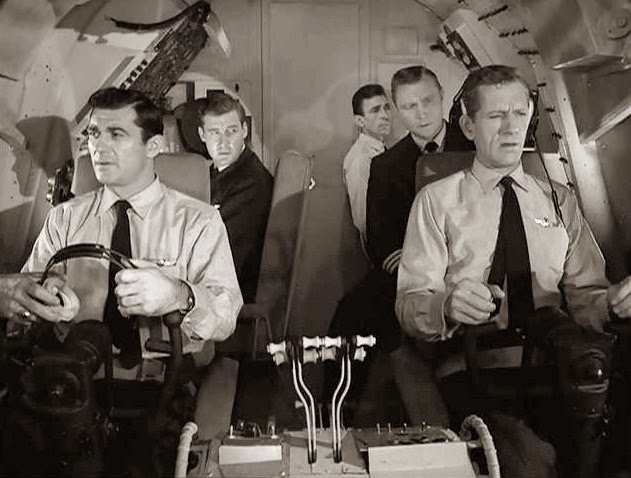 This is another remarkable Twilight Zone story about unlucky plane passengers.

In this case, a commercial air liner en route from London to New York somehow jumps a time track. Instead of arriving at Idlewild Airport in the present, the plane flies over New York to find it inhabited by dinosaurs.  The plane retraces its steps, makes a second approach, and the passengers see the 1939 World’s Fair this time  Finally, the plane makes one final attempt and…

…well, let’s just say that if you ever hear something in the sky above -- the strain of over-taxed engines, for instance -- it may very well be the sound of lost Flight 33, still trying to reach home…the Flying Dutchman of cult-television history. 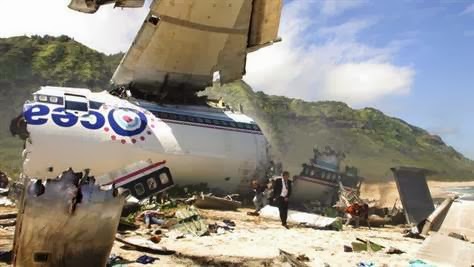 The year 2004 brought scripted dramatic television back to the forefront with a bang (in the era of reality TV) with Lost (2004 – 2011).  This science-fiction drama from J.J. Abrams concerned the passengers of Oceanic Airlines Flight 815, which crashed on a mysterious island and was soon confronted with a “smoke monster,” hostile “Others” and even a strange, subterranean hatch.

The crash itself was depicted in harrowing and vivid terms in Lost's extraordinary pilot, and the plane was seen to split into sections.  In the second year of the series, some survivors met up with the “tailies,” passengers who survived impact in another part of the plane.

Before Lost was through, the passengers of Flight 815 were subjected to flash-backs, flash-forwards, and even flash-sideways... 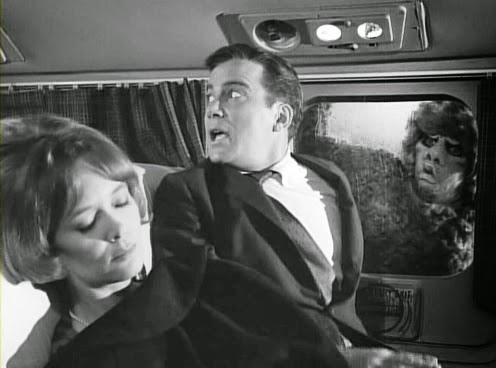 This is surely the acknowledged classic of the terror-on-an-air-liner sub-genre.  A passenger named Robert Wilson (played with twitchy authenticity by a young William Shatner) becomes convinced that a monstrous, mischievous gremlin is on the wing of the his plane, imperiling the flight.  A taut and tense half-hour from director Richard Donner finds Shatner -- believed to be insane by his wife and fellow passengers -- battling the Gremlin, and attempting to prevent a crash.  Although the monster isn't very convincing, this episode remains incredibly suspenseful, and oddly touching.  At some point, Shatner's wilson realizes that he is totally and completely alone, patronized and written off, and takes matters into his hands.

God knows just how many people this single half-hour of a fifty-year old series scared permanently away from commercial air travel.

And if you're traveling that route today...have a nice flight, and watch out for detours into the Twilight Zone.
at March 21, 2019