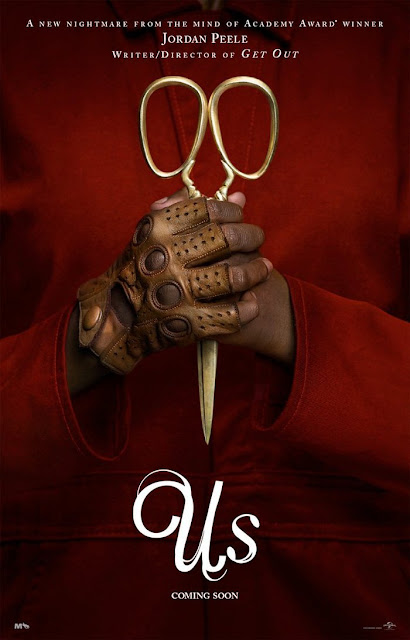 "US. Jordan Peele's follow-up to Get Out will leave skittish audiences tossing and turning at night" 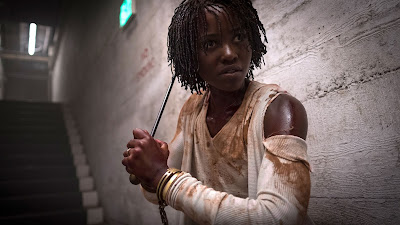 There's a blood-soaked war at the crux of Jordan Peele's latest horror film, US, and it's a clash between the Writer/Director wanting to create a living nightmare, a visceral scare-fest that will have audiences jumping into their neighbor's lap, and the Writer/Director wanting to explain those terrors, which is the filmic equivalent of accidentally turning on the overhead lights in a fun house.

For the most part, Peele's film captures the uncanny, inexplicable repulsions one finds in the unholy dreams that leaves one waking up startled at three a.m. But once you start adding rabbits and tunnels and bunk beds to make sense of the tales, the audience is trying to piece together a chronology and logic that sucks out the creepiness. US works best when it is irrational. 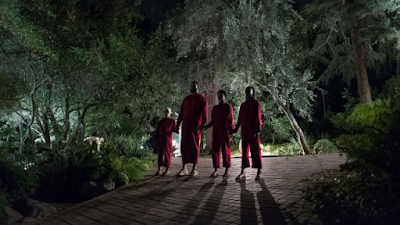 As a child, Adelaide (Lupita Nyong'o) had wandered away from her arguing parents at a boardwalk amusement park and wound up in a house of mirrors. What she saw petrified her and left her mute for a period of time. Now a mother with two children, Adelaide still has residual anxiety. When her husband (Winston Duke) and kids (Shahadi Wright Joseph and Evan Alex) travel back to the same beach town, Adelaide senses something stalking her. One dark night, she discovers her fears are real.

US is visually stunning. The bright reds of the antagonist's robes against the dark sky are unsettling. A barricade of robe-wearers in the final act is bone chilling. The images evoke an inevitability and impotence forever returning to a normal society. The double characters are animalistic, using wails as language, and erratically moving as if their joints are beartraps snapping into place.

Peele choses a stellar cast, including two adolescents who deserve their own action films after this. Nyong'o creates the perfect face for horror. Her large saucer eyes throb as tears drip down like worms. Peele traps audiences inside her fears by making hers so palpable. Hardly a shrinking violet, Nyong'o evolves into a kick-ass warrior, ready to snap anyone in half who endangers her family. She also has a blast as her double, a primal beast, viciously exacting vengeance.

Peele lovingly calls attention to past horror films and tropes. '80s movie fans will quickly recognize the Santa Cruz pier from The Lost Boys. The positioning of twins on the floor and a close-up on Nyong'o's horrified face both pay homage to Stanley Kubrick's The Shining. In a film about doppelgangers, Peele finds several subtle nods, such a real spider crawling under a rubber fake one. He shoots the opening scene low to the ground, from a little child's perspective, reminding audiences how overwhelming a crowded amusement park can be for young children.

As in his Oscar-winning hit Get Out, Peele perfectly blends chilling moments with dark humor. He also manages to treat horror as a parable as George Romero did so swiftly in his glory days and for the most part, in understated ways. When, in the conclusion, he slips an explanation in, it falls flat. The rationalization is too sketchy and half-baked to comfort the audience, and already has them thinking too much at a time they want to be mindlessly haunted. The twist ending also gives audience something to ponder after the film, which will leave them more confounded than satiated.

Jordan Peele's US has that lingering dread of a nightmare that one finds in Dario Argento's masterpieces like Suspiria. The images provoke an apocalyptic sense of passing beyond logic and accepting pure madness as the new norm. By attempting several twists that steal away the dreamlike qualities and force the audience to bring logic aboard, he walks dangerously close to M. Night Shyamalan territory where being clever is more highly rewarded than being spooked.

Read Jonas's other reviews at: www.theatermania.com/author/jonas-schwartz_169
at March 28, 2019