Horror Lexicon 19: The Sting in the Tail/Tale

In his landmark book of genre film analysis, James Bond in the Cinema (1981), the great John Brosnan often wrote about "the sting in the tail," that moment near the end of a James Bond film, when the surviving villain gets the jump on 007, and there's one last thrill before end credits roll. Think of Mr. Wint and Mr. Kidd spoiling a perfectly nice ocean cruise at the end of Diamonds Are Forever (1970), for instance, or Nick Nack doing same in The Man with the Golden Gun (1974). 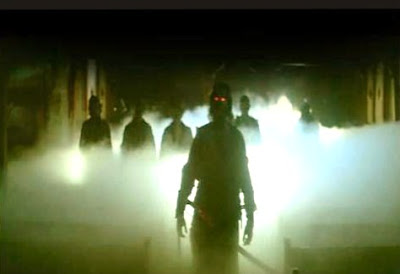 The sting in the tail/tale comes in many shapes and sizes. Often the final "sting" is a development you don't expect, something that ratchets up the terror, and changes the very nature of the narrative, even setting up the grounds for a sequel.

In other cases, the sting in the tail/tale is a moment of high drama and terror ultimately revealed to be a dream sequence (through the auspices of the "Stay Awake" shot.)

Films including Carrie (1976), Dressed to Kill (1980) and Prince of Darkness (1987) all resolve with stings in the tail/tale that get the blood pumping, but are revealed to be phantasms of the mind, not reality.

A great play on this aspect of the convention occurs in Phantasm II.  Mike (James LeGros) insists to a terrified Liz (Paula Irvine) that the terror around them is all a dream. Then the Tall Man (Angus Scrimm) appears and punctures that particular balloon.  "No...it's not!" He croaks.  Fade to Black...

Sometimes, a sting in the tail/tale reveals that a "beloved" character didn't really die (Fright Night [1985]), and sometimes, the sting resolves a lingering question in the narrative. The great, final sting of John Carpenter's The Fog (1980) is a direct answer to Father Malone's (Hal Holbrook) interrogative about why the vengeful Blake didn't seek revenge upon him.

Off with his head!

One of the great sting-in-the-tail/tale endings of film history is seen in another Carpenter film, Halloween (1978). To me, this is one of the most elegant and beautiful stings in film history.  After we see that Michael Myers is still alive, Carpenter cuts to a montage of empty rooms and dark houses...places where Michael Myers already has been during the course of the film. We don't see him, but the montage is accompanied by the sounds of his heavy breathing.

This sort of "where's Michael" final sting is so much more effective and inventive than a last jump wherein Michael re-appears, and gets shot in the head. Instead, Carpenter sort of "universalizes" the terror of Michael.  He could be anywhere now, the montage suggests.

Even in the back seat of your car... 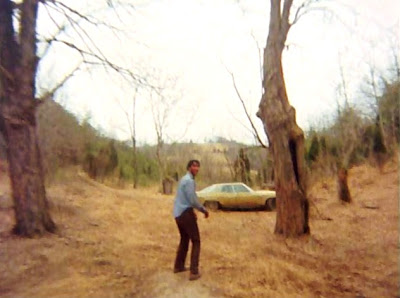 Another sting in the tail/tale ending I admire tremendously arises in Sam Raimi's The Evil Dead (1983).  Here, Ash defeats the Deadites and limps out of his cabin in the woods, only to be pursued -- one last time -- by a horrible, unseen force.

The orchestration of this P.O.V. attack is remarkable, and audacious.We race (on the camera, apparently...) through the woods, through the very cabin interior, over a fallen door, right into Ash's screaming, protesting face.

This ending is not only terrifying, it's a reminder of the film's bravura "pummeling-the-audience" aesthetic.

Most often in horror films, the sting-in-the-tail/tale ending is as simple as a killer you believed was dead, popping up for one, final scare before being put down (Scream [1996], The Resident [2011]). Hollow Man (2000) takes the trope to extremes. The invisible -- and psychotic -- Sebastian Caine (Kevin Bacon) comes back from beatings, electrocutions, freezing and other environmental extremes for one final "surprise" (not really) scare in an elevator shaft, before his lover, Linda (Elisabeth Shue) dispatches him into a pit of flames.