In the second episode of the short-lived sci-fi series Beyond Westworld, titled "My Brother's Keeper," mad scientist Simon Quaid (James Wainright) attempts to use his humanoid robots to gain control of the Stoner family empire, which includes oil interests, and the management of a professional football team.

Quaid's point of entrance into the Stoner family fortune is Dean Stoner (Jeff Cooper), a loser and gambler who owes 200,000 dollars to debtors.

Quaid plans to buy off Dean's debt, and then when Dean's brother Nick (Christopher Connelly) is murdered by a robot, assume control over the estate himself, per a signed contract with Dean.

They discover, together, that the killer robot is a team quarterback. The robot will throw a football at Nick, using robotic strength, and make the murder look like nothing more than an unfortunate accident.

Meanwhile, to help succeed in his scheme, Quaid has produced a robot duplicate of Pam... 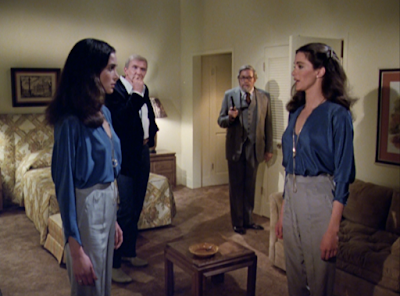 Connie Sellecca joins the cast of Beyond Westworld this week, replacing Judith Chapman as the series' female lead.

Personally, I liked Chapman's character better, simply because Dr. Garry has a grounding in science, rather than "security" or "espionage" (like Pam), and that gave her some nice differences with Moore. We already have a dashing person of action.  It seems undramatic to match him with another. 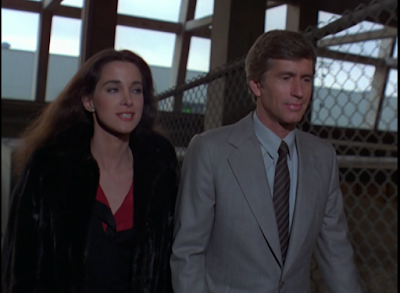 In terms of the series, "My Brother's Keeper" begins to cement the formula established by the pilot episode, "Westworld Destroyed."

Specifically, we now understand as viewers that we will be able to detect the identity of the robot through unmotivated close-ups of seemingly unimportant or insignificant characters.

And similarly, we will get a shot of the robot's point of view, just to make certain we don't miss the fact that he or she is, actually a machine.

Why is this approach a poor one?

These episodes, produced by Fred Freiberger, would be much more effective if we wondered about the identity of the robot right to the end instead of being told the identity via the unmotivated close-up and ensuing robo-POV. 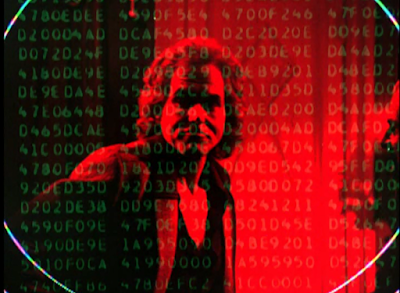 Also, the robots tend to be peripheral characters in the series, not ones who really motivate the action  in a meaningful way It would be amazing to be introduced to a character as a major player in the drama (say, like Nick or Dean here), only to find that they are a robot...and don't yet realize it.

But Beyond Westworld simply isn't that crafty, or suspenseful. It doesn't really seem interested in the potential of the premise -- lookalike robot infiltrators in humanity's affairs -- just surface action.

This episode also cements the standard visual clue (appearing at story climax) that a robot has been rendered inoperative. His or her eyes go white, or blank when it is deactivated. Here, the robot quarterback gets electrocuted, and his eyes go white. 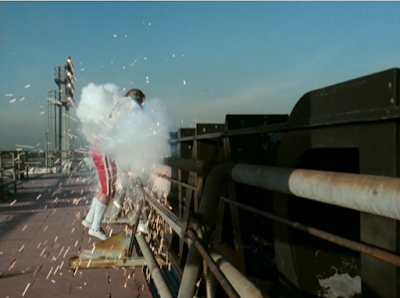 A big question here involves Quaid and his approach. He told Jim and Laura in the first episode that he possesses an "impregnable" army of loyal robots.

If this is the case, why mess with the penny ante  plot like the one explored in this episode? Why not just make a robot replacement of Dean? Why all the elaborate plotting to kill Nick, buy Dean's debt, and assume control of the family business?

The biggest problem, perhaps, with Beyond Westworld at this point is that it is crushingly uninteresting. The lead characters are cardboard, the evil genius's plans don't make much sense, and the stories so far generate no sense of tension or suspense.

That only leaves action, frankly, to appreciate.  And the action scenes on the series thus far have been anemic.

Next episode: "Sound of Terror."

Email ThisBlogThis!Share to TwitterShare to FacebookShare to Pinterest
Labels: Beyond Westworld, Westworld