This week on Space Academy, Tee-Gar Soom (Brian Tochi) experiments with a "cryotron," a device that will ultimately be able to "cool down hot planets."  He demonstrates it for his friends, and for Gampu (Jonathan Harris), and is pleased with his success.

But Tee Gar is also due for a vacation, so he leaves the Academy and doesn't learn that his experimental cryotron device --which looks like a ray gun with a back pack -- posseses a fatal flaw: the frozen objects become unstable and explode.

With Loki and Peepo, the oblivious Tee Gar heads to the asteroid of Daleus to perform further tests on the cryotron, only to see the potential weapon stolen by a strange, solitary giant named Dramon (Don Pedro Colley).

Dramon abducts and then freezes Peepo with the Cryotron, and then needs Tee Gar's help to restore the robot to normal.

The only thing that can save the diminutive droid is "moist heat."  Fortunately, a hot spring on the planet surface gets the job donem and Peepo is saved.

At the end of the day, Peepo is back to being himself, and Dramon returns to the Academy as a new friend.

Meanwhile, Tee-Gar promises to continue work on his freezing device.

"All great men have suffered disappointment," advises Commander Gampu "from Galileo to the Wright Brothers..." 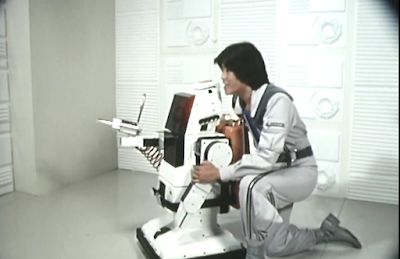 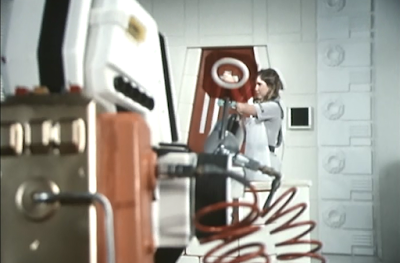 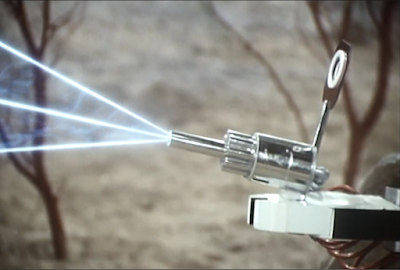 "Planet of Fire" is a disappointment, I would assess. It's not that it is a terrible episode, it's that it is pitched a lot lower than earlier episodes.  "Countdown," "Survivors of Zalon" and "The Rocks of Janus" could largely pass muster on a prime time series like Star Trek (1966-1969) or Space:1999 (1975-1977).  The concepts are strong ones, and the execution is pretty good too.

But "Planet of Fire," is, in essence, about the cadets encountering a lonely giant who freezes their robot.  They make friends with him. 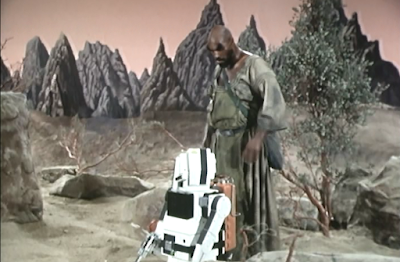 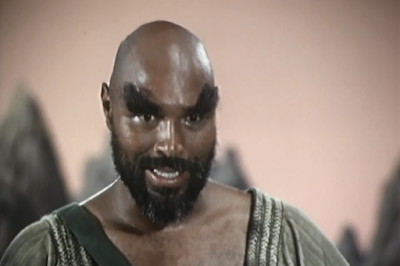 This isn't to say that the lesson about friendship is unworthy. It isn't. Dramon is confused that Peepo's buddies risked their lives to rescue him. "Maybe the way you act, you don't deserve them [friends]," Peepo suggests, and so Dramon reforms his anti-social ways.

There's also a lesson here about tenacity. Tee Gar has failed in his work, making the cryotron safe and functional, but one set-back cannot be the end for a scientist.  He must re-tool, and try again.  Otherwise, nothing of value will ever be invented right.  In some ways, Gampu's speech to Tee Gar about success is absolutely perfect.  It's something a good teacher would say. And it reminds me, absolutely, of moments between Captain Picard (Patrick Stewart) and Wesley Crusher (Will Wheaton) in Star Trek: The Next Generation (1987-1994), particularly in shows such as "Coming of Age."

Still, these lessons for Tee Gar and Dramon feel a bit too preachy, and they are grounded in concepts that aren't that great.  A giant? A freeze ray?  Space Academy often aspires to be more than pulp-branded entertainment, and it's a bit sad to see "Planet of Fire" rely on such hoary ideas.