In “The Wreck of the Robot, Will (Bill Mumy), Dr. Smith (Jonathan Harris) and the Robot encounter strange, sinister aliens in a cave.

These dark, curious beings want to take the Robot, and offer to pay for it, but Will refuses their ffer.
Later, the aliens make the same demand for the “mechanical man,” and Professor Robinson (Guy Williams) also refuses.   The Robot begins to feel fearful that his “number is up,” and that his days with his “family” are numbered.

When the macabre aliens act again, they board the Jupiter 2 by darkest night, take the robot and dismantle him.  They offer to return him -- though in pieces -- when their examination is through.

The Robot is returned, but soon all the mechanical devices in the Robinsons’ camp begin to act strangely…out of control.

The family soon realizes that these aliens of “evil ambition” plan to conquer Earth.  And they will do so by turning man’s machines against him! 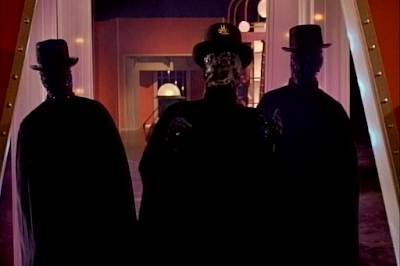 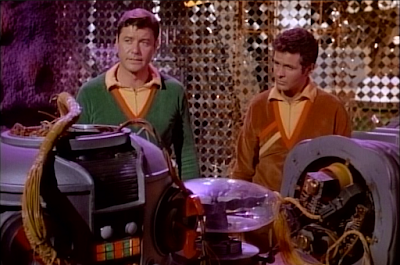 I won’t pull punches in my review today.

"The Wreck of the Robot” is the best episode of Lost in Space’s (1965-1968) second season, at least so far.  It vies for this title with “Prisoners in Space,” but I would seat it just a bit higher than that fine, and entertaining entry.

Why such regard for this episode?

Although the episode is shot in color, “The Wreck of the Robot” strongly recalls the expressionist nightmares of season one installments such as “Wish Upon a Star,” and the child-like innocence (but also terror…) of such stories as “The Magic Mirror,” or “Attack of the Plant Monsters.”

This story involves strange, faceless aliens in cloaks and hats who are genuinely terrifying in image and movement. Yet their image is further enhanced by the compositions and shots chosen by the director, Nathan Juran. 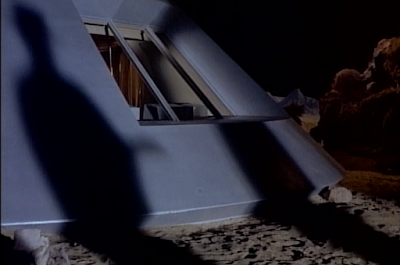 For example, these extraterrestrial creatures -- kind of early versions of Buffy the Vampire Slayer’s fearsome Gentlemen -- are sometimes seen only as shadows reflected on the hull of the Jupiter 2. And by pitch-black night, no less.

And in one thoroughly unnerving scene, these beings steal inside the safe haven of the Jupiter 2, and peek in on the children, Penny and Will, sleeping soundly.  They stand there and watch, before moving on, and the impression is one of real malevolence; real danger.

On a series that so often feels silly, this invasion of “home” does not feel silly at all. 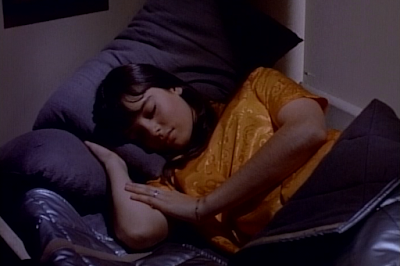 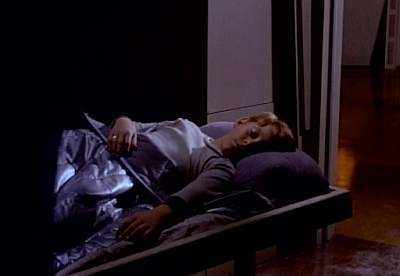 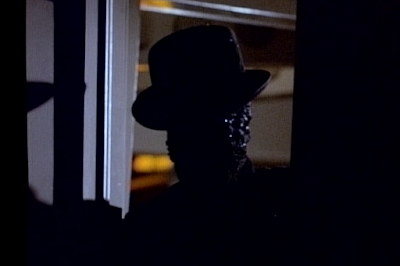 The fear being expressed in “The Wreck of the Robot,” quite simply, is something akin to “Stranger Danger.”  All children, I believe, understand this fear instinctively; that some malevolent adult stranger has set their sights on us, and wants to take us away from our family.

If one analyzes the images in “The Wreck of the Robot,” one begins to understand that’s exactly the story featured here. The alien strangers are, in terms of symbolism, depicted as strange “adults” in their formal hat and capes.

Secondly, they arrive to steal one of the family -- the Robot -- who is deathly afraid of them.

And then, worst of all, these alien stranger come by night, as the children sleep, and invade the safety of the home (the Jupiter 2), while the parents are totally unaware, oblivious of the danger posed. 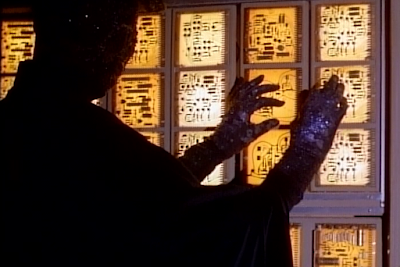 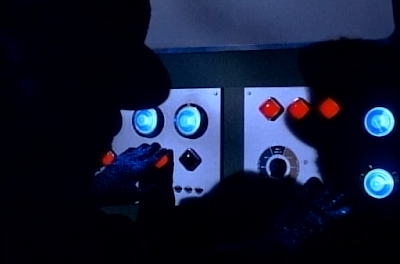 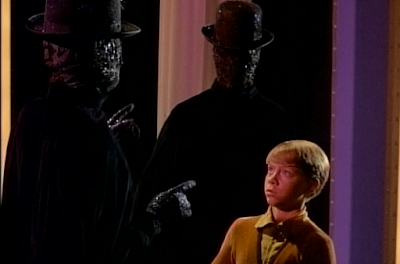 The Robot is taken, metaphorically, from his home, at night and then “dismantled,” a kind of body image attack that is not far, idea-wise, from physical or sexual assault. After being returned and re-assembled, the Robot readily admits he feels uneasy; that he is not himself yet.  For lack of a better word, he is traumatized.

Given the metaphorical meaning of the tale, “The Wreck of the Robot” plays as something much like a child’s nightmare. The sinister aliens are both grotesque (for being faceless) and representative of adults (in their choice attire), yet also -- in some way -- whimsical or childish. They are the kind of monster a child might be afraid of. They are simultaneously repellent and impossible to stop watching.

“The Wreck of the Robot” also succeeds for two other reasons. First, it features a remarkable and heart-felt scene between John and Will Robinson. 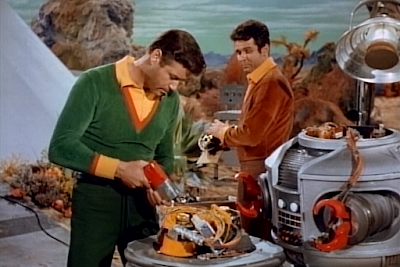 John wants to tell Will that he will be okay, even if he loses the robot, and one cannot help but think of a parent comforting a child over the loss or injury of a pet.  John tries to tell Will that he will be all right, no matter what happens to his friend.   Also in this scene, there’s a great moment about how fathers love their sons.  For them, John says, it is like reliving their own childhood; like he gets to grow up all over again.  This is, frankly, how I feel almost every day with my son.  I get to relive childhood through his eyes; his experiences. 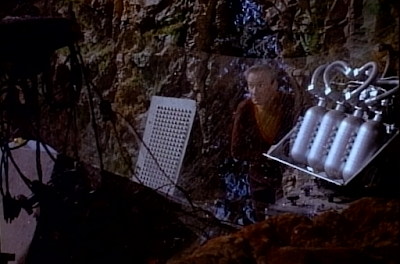 “The Wreck of the Robot” also seems to understand that a little Dr. Smith goes a long way.  He is not the center of the story, he does not attempt to deceitfully sell the Robot to the aliens, and his comic antics are not allowed to detract from the narrative’s sense of developing fear or terror.  The worst scene in the episode, in fact, is one in which Don and Judy tease Smith with the Robot’s severed head. But even that doesn’t ruin the episode, overall. 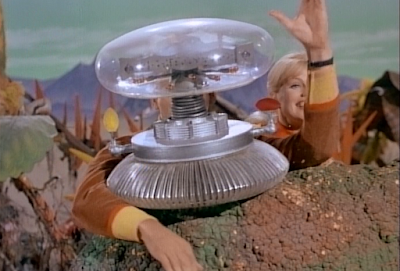 In terms of character development, “The Wreck of the Robot” certainly does a lot for the “Bubble Headed Booby.”  The Robot survives his abduction in the end, and destroys the alien machine -- when no man or machine can -- because of his unique nature.  As he suggests, the Robot is not a man and not a machine, either, but something in between.  He has a soul, perhaps one might conclude. 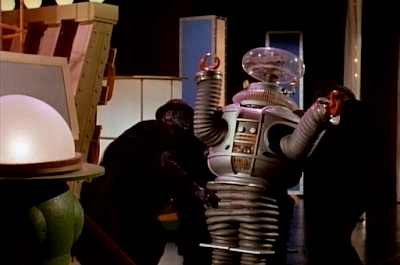 But even the Robot’s strange journey -- and sense of self-discovery in this episode -- is secondary to what I feel is a deeply psychological story about childhood, or adolescence; the fear of the adult world and its strange rules (again, represented by the aliens’ formal hats, I would suggests), as well as its murky, unspoken dangers.

I absolutely love Lost in Space when it plays on this terrain, as a kind of futuristic fairy tale for kids
(think “The Magic Mirror” or “My Friend, Mr. Nobody.”)

I readily confess that I have found some previous episodes of the second season not only tiresome, but actually atrocious.  “

"The Wreck of the Robot” rights the ship, at least for a moment.