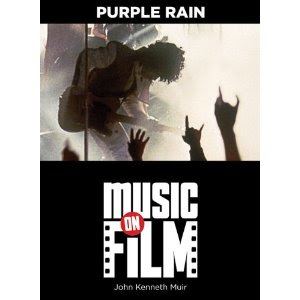 My newest book, part of Limelight Edition's celebrated "Music on Film" series, will be released shortly, and I wanted to give readers here a head's up about it.

My first text in the series gazed at  the making of 1984's This is Spinal Tap, and this new edition gazes at another classic rock film of that very year, Purple Rain.

To celebrate the book's upcoming release, the blog Onstage and Backstage, has posted my piece "Four Reasons Why Purple Rain Endures."

"1. Purple Rain is as close to getting “to know” the real Prince as we’re likely to get.
The artist who changed his name to an unpronounceable symbol and declared the Internet “dead” in 2010 is an enigmatic, mysterious fellow.  What makes him tick?  From what inner turmoil does his creative genius derive?
Although featuring a heavily fictionalized account of his life, Purple Rain remains the closest we are likely to get to an authentic Prince screen biography.  The film reveals the turmoil in his home life among his parents, and the relationships roiling Prince’s band mates in the Revolution.
At the start of Purple Rain, Prince emerges from smog and fog in silhouette and finally becomes visible…at least for the duration of the movie. This is as clearly as we have ever viewed the man, and his later films, including Under the Cherry Moon (1985) and Graffiti Bridge (1990) assiduously steered away from offering any further biographical detail.
2. The film is multi-faceted in its depiction of an icon.
We’ve all seen big-screen musical biographies, and most often, they gloss over warts to forge a heroic, larger-than-life portrait of a talent we’ve come to love.  Consider Cool as Ice (1990), or even 8 Mile (2002), both of which failed to capture the real life experience or apparent rage driving performers such as Vanilla Ice or Eminem.
Or consider the superficial, bubble gum Rick Springfield vehicle, Hard to Hold (1984).  By contrast, Purple Rain reveals Prince in all his flawed and human dimensions.  He’s a genius, but he’s difficult.  He’s talented, but he’s demanding.  He’s an iconoclast and a perfectionist, and he’s anchored by nagging self-doubt.
In one of the film’s most famous scene, Prince sits back-stage – sulking in his tent as it were – making funny voices with a hand-puppet.  He comes off as angst-ridden, self-centered, and isolated.  Purple Rain is willing to reveal Prince in all his human shades, even the unflattering ones, and that’s why some critics (including Roger Ebert) listed it as one of the top ten films of 1984."
Check out the rest of the piece at Onstage and Backstage, and also watch a video about the book, featuring a voice-over by yours truly.  And don't forget, you can pre-order the book at Amazon.com, here.
at March 08, 2012