I was in kindergarten the September after Steven Spielberg's Jaws (1975) premiered in theaters, and I'll never forget that for Halloween, one of my best friends showed up costumed as Bruce, the great white shark.

I also very vividly remember that at the book-mobile sale that year, I purchased a joke book based on Jaws.

Yep, America was in the clutches of Jaws-mania.

Even though I didn't see the film at the time (I was five...) everybody was talking about it.  I remember my Aunt Vivian describing the movie to me in vivid terms when I saw her at my Granny's house.  Vivian was always great for that kind of thing.  While I was too young in the 1970s to watch R rated horrors like Halloween (1978) or Alien (1979), my aunt Vivian was great at giving me blow-by-blow descriptions of the movies, and let's just say I appreciated her devotion to providing ALL the details.

The goal of this game was to use a probe to fish the contents (yuck...) out of the shark's stomach, without those fierce jaws a-snappin'.

Some of those contents included a human skull, a fish skeleton, a tire, a camera, a pistol, a glove, a boot, a walkie-talkie, and a wagon wheel (!).  In the version of the game I own, these delicacies are all molded in white or blue plastic, but the game box shows different colored items. 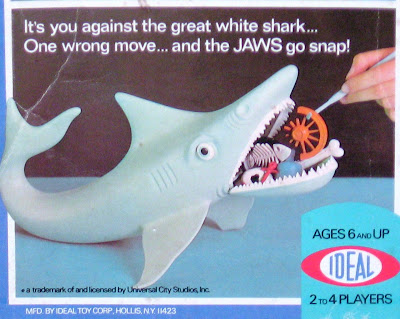 Jaws' snapping mouth was held together by two rubber bands, and alas, those are the only parts of this game that have not survived the intervening decades.

When Joel and I play this game in my office, our shark is sort of slack-jawed, unable to close his mouth, unless we slam it shut.

Every time I look at this Ideal game, I remember being a little kid, playing this game, and wondering what on Earth the movie Jaws could possibly be like...
at February 08, 2012