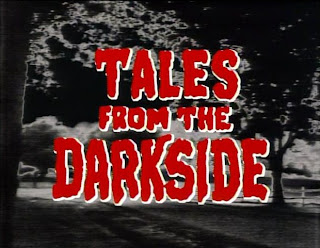 My wife has informed me on more than one occasion that I become highly offended when the telephone in our house rings during the evening, and she's absolutely right.

I hate telephone interruptions when I'm screening a movie or TV episode, eating dinner, or writing.

Now, I don't object to calls from friends and family, mind you, but the ubiquitous calls from political parties, telemarketers, doctors' offices and the like drive me absolutely up the wall.  In fact, I've developed what I can only term a Pavlovian response to the telephone's loud ring. I simultaneously feel a pit of acid in my stomach, and a dawning sense of agitation and anger.
Tales from the Darkside's one-woman show, "Answer Me" recognizes how annoying a persistently ringing telephone can be, and utilizes that sound to punctuate a droll half-hour of escalating terror. The episode exists in a kind of irrational, illogical zone of terror, featuring the scatter shot logic of a dream.  And yet, "Answer Me" boasts some genuine psychic power and gravitas because we all hate technology that we can't control.  Like a damned telephone that rings all hours of the night, undeterred by our desire to silence it.
In "Answer Me," a woman named Joan (Jean Marsh) has sub-let an apartment in New York City from her friend.  But all night, every night, the telephone in the next apartment, 12F rings.  Worse, there is  anoccasional pounding on the wall too, just as she is about to drift off to sleep.
Joan grows increasingly agitated and restless as the days go by, and the damned phone won't stop its plaintive ringing.  She learns, however, that the apartment is vacant and that the woman who once lived next door...died in the apartment.   She apparently committed suicide.  She strangled herself.
As the phone continues to ring, unabated, all day and all night, Joan fiinally breaks into Apartment 12F to have a look... 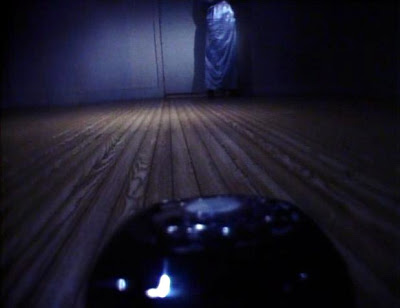 If you apply logical standards to this episode of Tales from the Darkside, you can see how it collapses under the daylight of rationality.  If Joan is truly vexed by the ringing phone, she has any number of options.  She could go stay at a hotel, for instance.  She could go to Apartment 12F and cut the phone cord.  Or, even, she could purchase ear-plugs.
And yet, undeniably, horror is not always about rationality or logic.

Sometimes the genre works quite effectively on a different level, a surreal nightmare level, and that's the quality "Answer Me" possesses in spades.

There's the possibility Joan's entire experience is a nightmare itself; or that she has found her way into Hell.  For instance, is Joan actually the woman (the English woman...) who died in the apartment netx door, strangled by the phone, but somehow reliving the event?  Her experiences with an uncooperative telephone operator certainly hint at such a possibility.  And  the fact that Joan never sees another human being during the episode's proceedings might even be interpreted not as a sign of the production's low budget, but as an indicator of the fact that the world itself is not right.  That Joan has traveled to some "dark side."
The final moments of "Answer Me" are ridiculous, and yet delightful, even inspired on some level.  The vexing telephone physically assaults Joan, and there's a wonderfully silly p.o.v. shot from the phone's subjective viewpoint during the siege.

Of course, a telephone as a malevolent evil force is kind of funny.

And yet again, somehow the idea works in this context, as an avatar for fear.  Not just as a symbol of intrusive technology, but as a representation of the fact that some objects we believe we control and dominate actually seem to take on a life of their own, especially when we're agitated, or thinking irrationally.
"Answer Me" is one of my favorite episodes of Tales from the Darkside.  It's another one that I remember from the series' first run some twenty-seven years ago.  As a teenager, it troubled my slumber and my psyche, although I readily acknowledge it's ridiculous in concept and execution.

Still, I've never forgotten the imagery of a woman driven mad by the incessant ringing of a telephone, and her final, mortal tussle with "convenient" technology.
Tales from the Darkside rarely ceases to impress me because it forges a real sense of imaginative terror from the thinnest of premises, and "Answer Me" is a perfect example of this quality.
at October 31, 2011

Email ThisBlogThis!Share to TwitterShare to FacebookShare to Pinterest
Labels: Tales from the Darkside