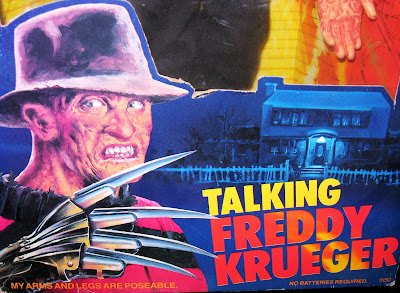 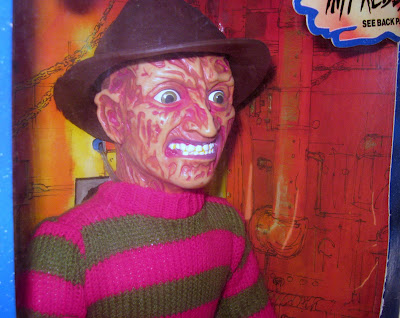 You may not be old enough to remember this arcane bit of Americana, but there was a spell in the late 1980s of...Freddy-mania.
Okay, perhaps the movement wasn't as big as Beatlemania in the 1960s, but it was still a considerable commercial force.
Specifically, three A Nightmare on Elm Street pictures starring Robert Englund were released between 1987 and 1989, along with rap songs about this famous bastard son of a 100 maniacs.

Also, toys of Freddy (and his notorious finger-knives) were hot items.  In particular, I always like to remember one particular statistic from 1988 that showed more five year olds of the day recognized Freddy Krueger than they did Abraham Lincoln.
You can imagine how that went over with the Moral Majority.
Ah, the good old days...
So in honor of Halloween, I'm trotting out my prized "Talking Freddy Krueger" (Matchbock; 1989) from the heyday of Freddy-mania.
This gruesome representation of Wes Craven's horror movie icon (intended for ages "8 and up") stands a whopping 18-inches all, and comes adorned in the character's trademark fedora and ratty red-and-green sweater.
And yes, he's wearing his finger knives.
The figure also features "poseable arms and legs," but best of all, croaks out juicy (and evil...) bon-mots, just like his quipping, silver-screen counterpart.
"Each time you pull Freddy's string, he has a special message just for you!" notes the legend on the back of the box.
Among Freddy's catchphrases:  "Hi, I'm Freddy," "Pleasant Dreams," "Let's Be Friends," "Welcome to Elm Street," and "Watch out, Freddy's back!"
Imaginatively, the interior of the Talking Freddy's box is designed to look like Krueger's boiler room, the very place he stalks and traps his prey.
It's a little strange to think about America's eight year olds playing with a large action figure of a notorious (fictional) child murderer, but on the other hand, children have always had a real (and I'd argue, healthy...) fascination with cinematic monsters.
Seen in that context, Freddy was merely the latest iteration of that fascination, after Dracula, the Creature from the Black Lagoon, and Godzilla.  After all, his TV series, Freddy's Nightmares (1988 - 1990) even made Freddy a regular fixture in living rooms for a while, a "hosting" job that softened his more horrific movie image. 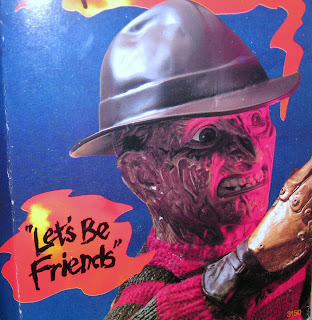 By 1994, Wes Craven himself was commenting on the yin and yang of Freddy-mania in his Pirandello-esque re-imagination, Wes Craven's New Nightmare.   I think he found a pretty good answer about the whole situation, likening Freddy to the witch from Hansel & Gretel.
In other words, there's an appropriate place for old Pizza Face in our culture, and that place emerges from our long cultural tradition for enjoying the macabre and the terrifying.
In other words, Freddy is part and parcel of the Halloween spirit.
So trick or treat..."and pleasant dreams..."

Email ThisBlogThis!Share to TwitterShare to FacebookShare to Pinterest
Labels: collectible of the week, retro toy flashback