Thanks for the Meme-ories: Images of America on Film

My friend and amazing fellow blogger, J.D. at RADIATOR HEAVEN recently tagged me regarding a meme circulating around the Inter Tubes. The meme originated with Checking on My Sausages and involves the assembly of a gallery of images (must be screen-grabs/captures...) that "stand for so much of what makes Cinema such a rich and exciting medium." J.D. selected images of isolation on his great blog, particularly from the cinema of Michael Mann. His collection is, in a word, stunning.

As per the rules of this particular meme, I've now selected my individual topic: images of America in film; particularly those that have sparked my imagination.

One of the aspects of this great country that I love the most deeply is its seemingly eternal capacity for self-reflection, self-criticism and sense of imagination about the future. In other words, we have been afforded a great freedom in this country: the freedom of our artists to express their opinion about the nation that nurtures them.

The images I have selected for this post represent the entire spectrum of positive and negative imagery, and span several decades (the late 1960s through 2009). If you read my blog with any regularity, you know my enduring theme that the technological art of film reflects "who we are;" that historical context is vitally important to an understanding and solid interpretation of any movie. Over the years, the cinema -- with startling imagery, as you can see -- has reminded us of who we are, who we can be, and what pitfalls we must avoid to build a better future.

Below are some of my favorite such film images of America and Americana. There's one still of Wall Street (The Stock Exchange...) in shambles, which is something we can certainly relate to today, in the aftermath of the Great Recession. There's also an image, circa our Bicentennial, of the "giant monster" threatening our future (hint: It's Big Oil). Another image represents patriotism, unity, and the spirit of of "Let's Roll-ism" shortly after 9/11. There's also Norman Rockwell-esque view of a wintry middle America that I've always admired, and a stirring pic that represents the death of innocence for the Boomer Generation...right in front of Old Glory. Another imnage I like very much remindsus that the future need not be bleak. That we can be caretakers of the land, of the Earth, even in the 23rd Century.

My favorite image, however, is the one showing middle America (Kansas?) experiencing an ICBM launch. The land and the farms speak of such beauty and peace, and the launches could easily be mistaken for fireworks. It seems to me, this cinematic moment captures with eloquence what we stand to lose,should the unthinkable occur. This would be a paradise lost. Amazingly, even the missile launches look gorgeous, and I think the subtle message is the paradoxical beauty of destruction. Perhaps we're addicted to it.

Anyway, here are the images. 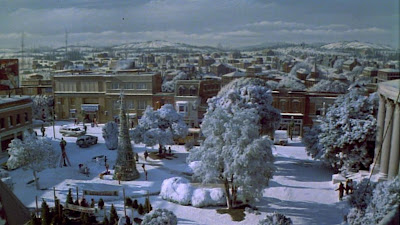 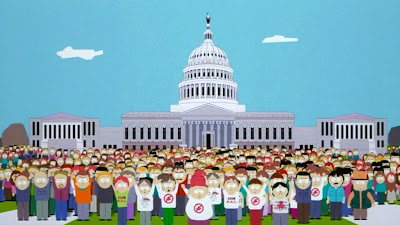 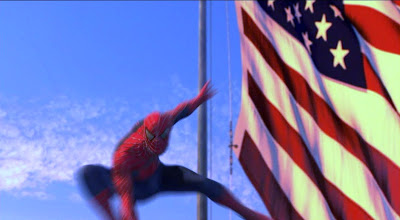 Now, in the tradition of these Internet memes, I'm supposed to say, "Tag, You're It" to five additional blogs that I would be interested in seeing take up this challenge of capturing images that reflect film's rich and exciting possibilities and legacy.
In no particular order, I'm going to politely suggest several personal favorites: Joe Maddrey at Maddrey Misc, who recently produced Nightmares in Red, White and Blue, Kindertrauma, Slammed & Damned, Vault of Horror, and Zombos Closet of Horror. These are all blogs (and bloggers...) that I love, and all of them boast a distinctive sense of "vision" that I find fascinating.