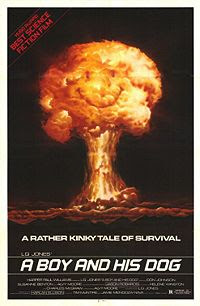 In 1975, Harlan Ellison's award-winning short story, "A Boy and His Dog" (featured in the 1969 collection called The Beast that Shouted Love at the Heart of the World) was adapted to film by actor L.Q. Jones, a relatively novice director. You may recognize Jones' name because he's a talented actor who has appeared in films as diverse as Casino (1995) and A Prairie Home Companion (2006) and he wrote the truly amazing (and deeply underrated) 1971 horror film, Brotherhood of Satan.
A low-budget production that nonetheless expertly forecast a post-apocalyptic vision quite similar to the one depicted in Mad Max, A Boy and His Dog proved to be an authentic triumph for Jones; in turns quirky, absurd, and in some surprising moments...even oddly heartwarming.

Generally well-received, A Boy and His Dog nabbed a Hugo for best dramatic production and was also nominated for several other awards, including ones from The Academy of Science Fiction, Fantasy and Horror Films, and The Science Fiction and Fantasy Writers of America.
Despite these honors, some critics also concluded that the film (advertised with the tag-line "a rather kinky tale of survival") was a misogynist effort, a judgment based almost entirely, it seems, on the film's final line of dialogue. Of A Boy and His Dog, Chicago Sun-Times critic Roger Ebert (writing in March of 1976), opined: "The movie doesn't look or sound like most s-f tours of alternative futures. It's got a unique . . . well, I was about to say charm, but the movie's last scene doesn't quite let me get away with that..."

A Boy and His Dog stars a very, very young Don Johnson as Vic, an impulsive and callow scavenger living in a ruined, post-apocalyptic Arizona circa 2024 A.D. (following World War IV...which lasted five days). Vic is accompanied on his journeys by Blood (Tiger from The Brady Bunch...I'm not kidding...) a canine with whom the lad shares a most unusual telepathic link.

In other words, Blood and Vic talk to each other, and much of the film is actually a running dialogue between dog and man. In this case, the dog -- whose main purpose is to procure women for Vic and help the young man avoid the roving "Screamers" -- is by far the smarter and more experienced of the two beings. But Vic doesn't always listen to the dog, and that causes problems.

Case in point: Vic really, really wants to get laid. It's been six weeks since he's been with a woman, and he's getting desperate. At a local showing of an old porno film in an open air venue, Blood informs Vic that he smells a lone female in the audience of homeless, pitiable people. Vic tracks her down, and this is how he first encounters Quilla June Holmes (Susanne Benton), a beautiful (and willing...) woman from the unseen world "down under." No, not Australia, but a civilization beneath the surface of the desert.
After Vic and Blood save Quilla from a gang of attacking Screamers, Quilla attempts to entice the head-strong, independent Vic to her mysterious world. But Blood is badly injured, and begs Vic not to go. Fired up about Quilla June, Vic decides to ignore the dog's advice (again!) and visit the subterranean world of Topeka. It's a creepy kind of 1950s Ozzie and Harriet "nightmare" civilization where everyone is so pale (from lack of sunlight), that they've taken to adorning creepy white pancake make-up. The town is run by an organization called The Committee (led by Jason Robards).

Topeka has big plans for Vic. They plan to make use of "the fruit" of his "loins." Turns out Quilla June was sent to lure him to the underground world. The women there can no longer get pregnant by the male citizenry of the little burg, and they need a man from above to get the job done. Vic thinks this is a dream assignment -- obviously -- until the exact details are made clear. There will be no intercourse (this is a prudish, repressive, 1950s patriarchy, remember?). So instead, he's attached to a painful looking sperm extraction device ..and it's here...filling one vial of semen after another...that he'll spend the rest of the days. A line of 35 blushing brides (in gowns...) wait outside Vic's medical theatre, nervously expecting his...fluids.
When Quilla realizes that the Committee has double-crossed her and has no plan to make her a senior member of the organization (her condition for luring Vic below...), she helps Vic escape. Vic can't wait to get back to his dog, to his life on the surface. "I gotta get back in the dirt...so I feel clean," he quips.
Back on the surface, a dying (but loyal...) Blood awaits. Vic is forced to make a tough decision to keep Blood alive. He must choose between a treacherous woman...and a beloved dog. I won't spoil the ending for you, but I imagine that from the hints dropped in this review, you probably know what I'm talking about.

A Boy and His Dog is both surreal and disturbing, but it's also (let's face it...) a truly funny movie. It's the rare genre film in which even the title cards prove amusing. A Boy and His Dog commences with a colorful, artistic montage of blooming mushroom clouds and then, after describing the duration of World War IV, cuts to a title card that reads: "The politicians had finally solved the problem of urban blight." Ouch.

That sort of blunt cynicism runs throughout the picture, from Vic's no-holds barred complaining ("I'm hungry and I want to get laid"), to Blood's retort when he and Vic encounter a brutal local warlord, and Vic asks why people follow him. "Probably just charisma," says Blood, deadpan.
The entire movie crackles with sharp, pointed exchanges like that. Don't get me wrong, it's not tongue-in-cheek or silly, it's just clever, and -- if memory serves -- remarkably faithful to Ellison's novella (especially in terms of Blood's dialogue). Today we know this brand of wicked sarcasm as "snark," so perhaps A Boy and His Dog is the first (and only...) snarky sci-fi epic. Yet it's more than just a whip-smart genre film, it's highly skilled in the ways it establishes and develops the characters. Within twenty minutes, for instance, you won't even think it odd that Don Johnson is arguing with a canine. I always liked Miami Vice, but I don't know that I ever thought Johnson was a truly great actor. Watch him here -- bouncing off a dog with passion, verve and resentment -- and you'll be convinced that he is. The entire film represents a sort of twisted genius (on a low budget). You'll never see another film like this, believe me.
In terms of theme, A Boy and His Dog is probably an equal opportunity offender. I saw the film's message as essentially libertarian: Vic was better off roaming the surface of a devastated earth with his dog than dealing with a so-called "society" like Topeka, one with layers of bizarre bureaucracy and twisted social mores. Better to be hungry, poor and battling Screamers than dealing with backstabbers and two-timers.
I certainly understand why someone would be tempted to look at the film and argue that it is misogynist, but I really, really think that's the wrong message to take away. For one thing, it's not exactly like Vic is choosing any old dog over a woman. His dog is quite special, after all: a telepathic mentor and friend. And the woman in question had just tried to sell Vic down the river and convert him into a living sperm bank. I mean, given those two alternatives, who would you choose? The friend you'd been with your whole life? Or the person who just tricked you? This particular woman is a bad apple; that's all the movie is saying.
For some reason, while I was watching A Boy and His Dog I was suddenly reminded of a great quote from an old Twilight Zone episode ("The Hunt," if I remember my Zones, correctly)
It went something like this: "A man? Well, he'll walk right into Hell with both eyes open. But even the Devil can't fool a dog..."
Word to the wise in the twilight zone; or in post-apocalypse Topeka.
at August 20, 2008