Collectible of the Week # 2: Alien Board Game! 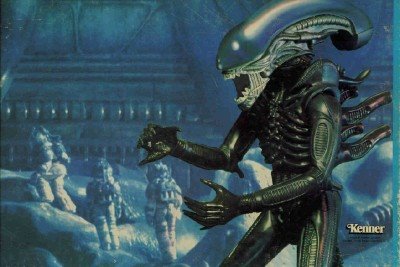 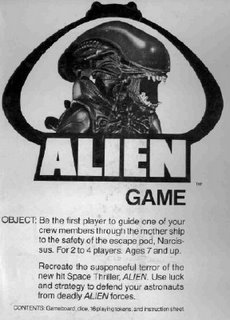 As if a sign from above, this morning, one of my displays fell from a high shelf, and the Kenner board game from the 1979 Ridley Scott movie Alien crashed with a thud on my desktop (in the process, scuttling my Buck Rogers in the 25th Century Star Fighter model...).

I decided this unfortunate event was an omen, and figured I should write about the game today, even though I usually blog about toys on Thursday.

I was just turned ten years old in December of 1979, when Alien was released nationwide in theaters, and though my ten-year old best friend and next door neighbor went to go see it, the movie was R-rated and my parents wouldn't take me. I think they were right, by the way -- I was too young. 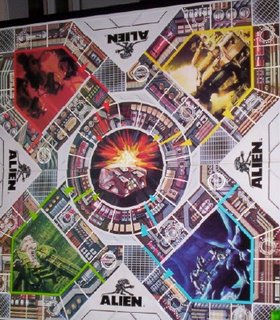 Anyhow, my buddy came back from a showing of the film around Christmas and then went on and on telling me all kinds of cool things about the movie I couldn't see. Making it worse, one of my aunts also saw the movie and regaled me with tales about how it was the scariest movie she had ever seen.

Hoping to be a part of the club, I collected the trading cards. I even read the Alan Dean Foster novelization. But I didn't actually get to see Alien for myself till it came out on videotape, years later (1983? 1984?).

Still, by 1980, I did get to play the board game, which you see here before you.

The first thing you may notice is that the alien depicted on the box cover (the photo with the blue background) is not an image or still from the Scott film, but a photograph of the Kenner Alien toy! Why? Because the alien depicted in the film was simply too 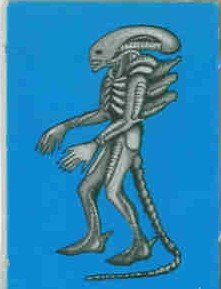 scary to put on a kid's toy box cover! Even funnier, this action figure toy also scared a bunch of kids my age, and was very quickly pulled from toy store shelves when outraged parents protested. I guess that's what happens when you make toy merchandise for an R-rated, balls-to-the-walls horror flick...

The Alien Game (for two to four players; ages 7 and up) is billed as "an exciting game of elimination and escape." The contents of the game include 16 playing tokens, an instruction sheet, a gameboard and dice. And the objective (as you maybe can read in the photo, if the image is clear enough) is to "be the first player to guide one of your crew members through the mother ship to the safety of the escape pod, Narcissus."

The game also urges players to "recreate the suspenseful terror of the new Space Thriller, ALIEN! Use

luck and strategy to defend your astronauts from deadly ALIEN forces."

I've always collected board games, but this one was one I actually played. I remember sitting with friends, gazing at the game board and dreaming of one day seeing that scary movie. You know, by the time I saw Alien, I had imagined and fantasized so much - so many awful, disgusting things - that I wasn't even really that scared of it...

Before long, I did move on from the Alien board game to another one. A fifth-grade friend had the board game of Escape from New York (1981), and it was way cool too...because you got to land a glider on the top of the World Trade Center, and recuse the President of the United States. Ah, fickle youth...