After 14 years, the sequel to the Pixar/Disney hit The Incredibles bulldozes its way back into theaters with new adventures, new powers, and new adversaries. Though set in a fantasy version of the 1960s, the film meddles in a retro version of the sexual revolution by focusing on patriarchal toxicity and the male's reluctance to accept females as fully equal.

Like the Avengers at the beginning of Captain America: Civil War, superhero-dom has been castigated. A disastrous mission that leaves a city in ruins further alienates the heroes, who become a scapegoat for the government. The Parrs, Bob (Craig T Nelson), Helen (Holly Hunter), and their three children must remain underground because saving the world is an illegal act.

When billionaire siblings (Bob Odenkirk and Catherine Keener) finance a mission to recreate good buzz for the superhero mission, they choose the more diplomatic Helen to be the face of heroes to Bob's chagrin. While Helen fights for justice, Bob becomes Mr. Super-Mom, forced to care for the three kids. Leaping 20 story buildings and outracing bullets may be a breeze, but keeping his eldest Violet from depression over a boy, his Peck's bad boy son Dash from being Super-rambunctious, and his unpredictable infant Jack-Jack from demolishing everything in his path is a gargantuan task. 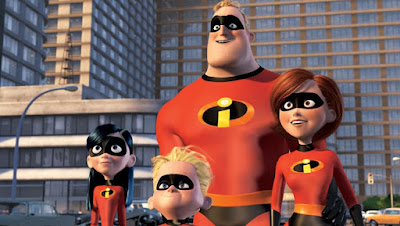 Director Brad Bird, responsible for the original megahit, continues to shape a movie version of the '60s glamour with architecture and visual style of the early James Bond films as well as the constructs of Disneyland's park Tomorrowland (Bird had two years ago made a live action version of said park which was a critical and commercial disappointment). Michael Giacchino's music harks back to John Barry's iconic Bond scores of the '60s. The animation is a cornucopia for the eyes. CGI has become so adept at simulating water, haze, and the flow of hair, that often it's unbelievable the audience is not seeing actual photography. The twilight times when the sky and clouds are translucent has been transferred beautifully to the screen.

Bird's configuration of the final climax on a speeding cruise ship forces your heart into your throat. It is on par with Bird's filming of Tom Cruise hanging off the Dubai high rise hotel in the best Mission Impossible, Ghost Protocol. The audience has invested in the Incredible family and their welfare and reputation drive the audience to pray for a successful, and fatality-less ending.

The script itself is functional, but not groundbreaking. Though the switched marriage role scenario fits in with the '60s milieu, it's an old-hat construct. The villain's domination plan is rather lame, and the script doesn't seem to have purposely created an absurd revenge crime to comment on that superhero/superspy cliché like Amazon's brilliant The Tick season two with Jackie Earl Haley's The Terror, therefore it lowers the heft of Incredibles 2's antagonist.

The characters have been voiced by major talents, and they all show the shading and intelligence one would expect from Hunter, Odenkirk, Nelson, Keener, and Samuel L Jackson (who returns as Frozone). As in the first film, the highlight is director Bird as the fussy fashion guru Edna Mode.

A fun summer film, Incredibles 2 will keep the entire family amused. One only wishes that the story had found something new to say to warrant the Parrs' return after so many years.

Check out Jonas's other reviews at www.theatermania.com/author/jonas-schwartz_169
at June 25, 2018