In “Fantastic Journey,” the fourth episode of Far Out Space Nuts (1975), Barney (Chuck McCann) is still working hard to repair the lunar lander, but a one-eyed giant cyclops -- Big Fuzzy -- approaches the ship and pries off an antenna…which it proceeds to lick like a lollipop.

Barney realizes they can’t return to Earth without the antenna, and in the space buggy he, Junior (Bob Denver) and Honk (Patty Mahoney) pursue.  On that pursuit, however, they stumble upon a trap by laid by a mad scientist, Kayla (Kay E. Kuter).

He has materialized in their path a “Molecutron” that only the greatest minds in the universe can determine how to operate. Barney and Junior -- the universe’s biggest morons – figure it out quickly, and are beamed to Kayla’s lab.

He wants them to decipher the rest of his machinery, which was actually stolen from two other scientists, the mad Dr. Drone (Stanley Ralph Ross) and Dr. Rundspock (Whitney Rydbeck).

The space nuts help Dr. Drone overcome Kayla, but must travel through time and space to recover Rundspock.  Unfortunately, Kayla is not out of the game, either, and materializes a cyclops -- Little Fuzzy -- to chase down his nemeses. 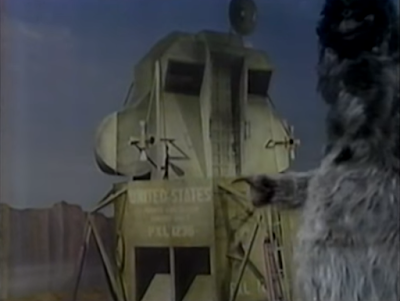 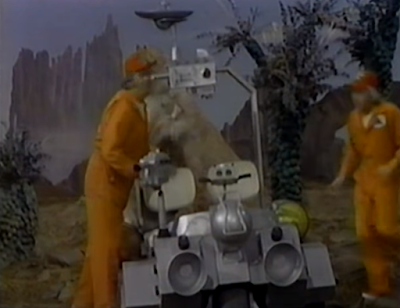 The Far Out Space Nuts’ descent into slapstick continues with the fourth episode, “Fantastic Journey” a scattershot show that employs Keystone Cops-styled fast-motion chase scenes, and the most over-the-top guest performance of the series.

In terms of the former element, the climactic chase through the alien laboratory is edited into a fast-motion, breakneck chase. It plays like a live-action version of a Scooby Doo denouement, with the pursued becoming the pursuers, the prey pretending to be statues, and other cartoon gimmicks.

In terms of the former, Stanley Ralph Ross plays Dr. Drone. He portrayed Dr. Frankenstein in an episode of The Lost Saucer (1975) too, but here he not only goes over the top, he launches over the top at escape velocity and soars to the heights of camp humor; the likes of which is rarely seen.  Not that he is bad.  Actually, his nutty deliver and bizarre performance is fully acknowledged in-story, and that actually makes it funny. After a while, Barney and Junior just accept Dr. “Daffy’s” behavior, and his over-the-top demeanor becomes comedy fodder, especially in the coda. 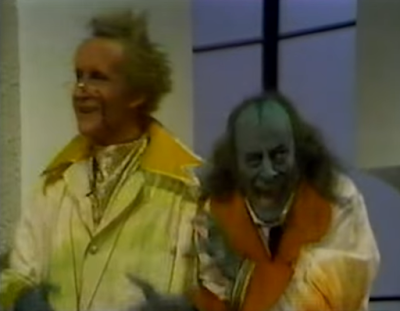 It is funny to note that in a span of four episodes, the series has descended from creepy comedy to outright slapstick madhouse. As the series started, Barney and Junior were inept, but they faced serious threats.  By “Fantastic Journey” -- no relation to the 1977 series, The Fantastic Journey by the way -- even the bad guys are being treated as a joke. 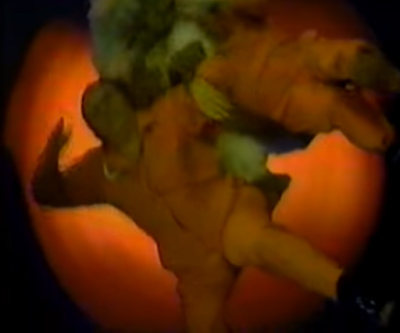 I liked the original take better. I was always delighted when Saturday morning television of the 1970’s took on a creepier, more adult air.  Think about, for a minute, how many people remember Land of the Lost (1974-1977), and what they remember from it.  Primarily, of course, it’s the creepy, hissing Sleestak.  I suppose I would have preferred for Far Out Space Nuts to maintain that balance between dopey slapstick heroes and a legitimate, frightening threat.

Next week: “Tower of Tagot.”