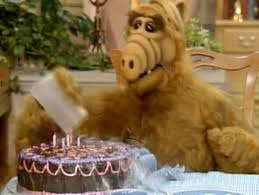 Yesterday, December 3rd, was my forty-eighth birthday, so it seems appropriate to focus this Cult-TV Theme Watch to cake, and preferably birthday cake.

A cake is a concoction of soft food made from a mixture of eggs, sugar, flour and other ingredients. A cake is baked, and sometimes decorate, if for a special event (like a birthday).

In one of the last episodes of Rod’s Serling’s The Twilight Zone (1959-1964), for instance, a huge, delicious-looking cake is served at Aunt T’s, a fantasy cabin in the woods where hopeless and forgotten children find the equivalent of parental love, in “The Bewitchin’ Pool.” 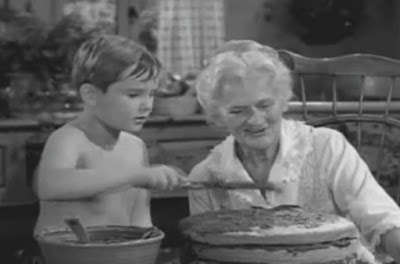 In Buck Rogers in the 25h Century (1979-1981), the astronaut from the 20th century, but awakened in the 25th century (Gil Gerard), gets a surprise party and a birthday cake with a lot of candles on it, given his age, in the episode “Happy Birthday, Buck.”

Alf gets confused in an episode of ALF (1984-1988) and pours cold water on his birthday cake candles, so as not to start a fire.

A cake of a most unusual variety appears in the seventh season Star Trek: The Next Generation (1987-1994) episode “Phantasms.” There, Lt. Cmdr Data (Brent Spiner) has a dream in which he carves up a cake that is molded in the shape of Counselor Troi’s (Marina Sirtis) torso and head. It is a “peptides” cake. 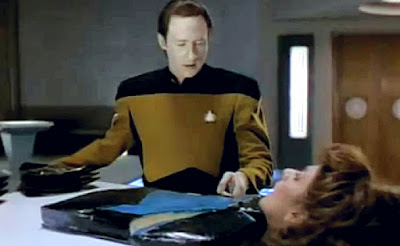 It’s not exactly a cake, but Scully (Gillian Anderson) gets a happy birthday cupcake from Mulder (David Duchovny) in The X-Files episode “Tempus Fugit.” 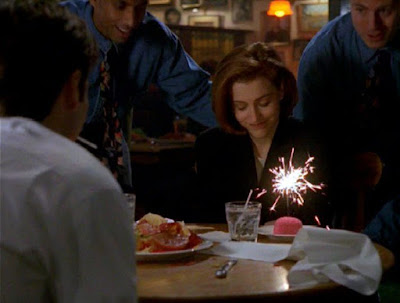 A birthday cake is the order of the day for Jordan Black’s (Brittany Tiplady) seventh birthday in the third season Millennium (1996-1999) episode, “Seven in One.”