On Medusa, where women rule, and men are lowly servants, Dr. Rudi Schmidt (Christian Quadflieg) of Earth, is made the domestic servant of Octavia (Christiane Kruger), the security chief for the planet.  He uses position, however, to obtain classified information about “rejects,” insurrectionist-males who have been banished to Medusa’s inhospitable surface.”

When Rudi’s treachery is discovered, he is taken to Medusan court, tried by computers, and banished to the surface with the “rejects.”  When he engineers an attempt to get back inside the city and steal a spacecraft from a hanger, however, the Medusans suspect that his talents can be harnessed elsewhere.

He is brought back inside, and Liz (Lisa Harrow) his former assistant in Britain, schemes to make him her domestic, so they conspire to return to Earth. 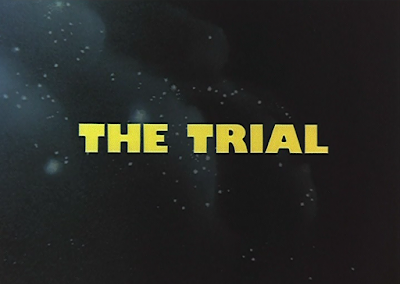 “The Trial” moves at breakneck speed, and gets in much action for a 22 minute episode. This installment depicts the Medusan legal system (highly computerized, and completely discriminatory...), and reveals a rebellion, or insurrectionist movement among some domestic males.

The story provides more action in this installment than has been seen in a while (since the car chase on Earth in the second episode, “Nemesis.”  '

One of the best moments of the episode features Rudi and the “rejects” on the surface attempting to down a Medusan ship; a malevolent-looking black vessel that looks like a cross between a spider and the Eagle Transporter from Space:1999 (1975-1977).

The ship fires a deadly beam, and the rebels are able to reflect the energy back at the craft. 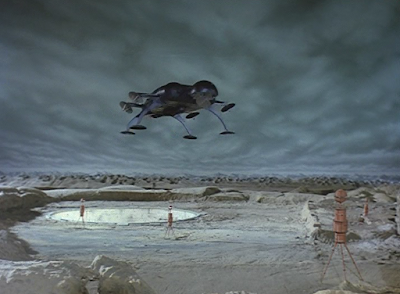 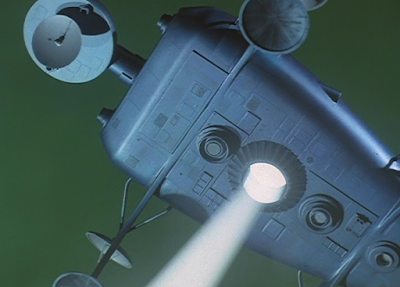 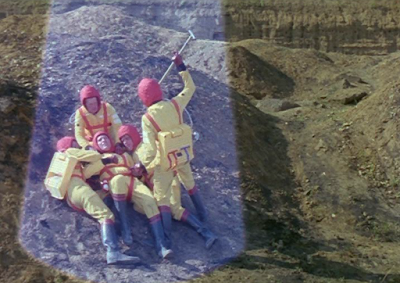 The idea of men being banished to the surface is a good one, though one that may not make strict scientific sense.

We have been told, in the weekly opening-narration, that Medusa left her system of origin and became a rogue planet, wandering through the space. In the process, her surface and atmosphere turned to ice.

The surface seen in “The Trial” is definitely inhospitable, though not frozen.  One might argue, I suppose that the surface is growing more hospitable since Medusa moves nearer and nearer Sol, our sun. Of course, that still doesn’t explain how the atmosphere continues to exist, and be breathable for humanoids. 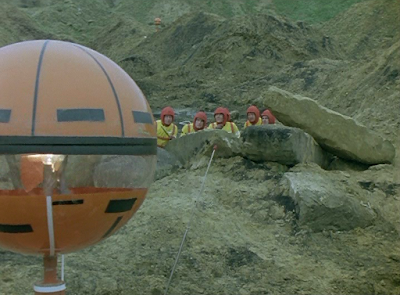 Although “The Trial” moves a little too fast, I find many aspects of it fascinating. Rudi’s trial, for instance, reveals computer lawyers and judges with female personalities, who, as a matter of course, discriminate against males.  So, on Medusa, the prejudice against men is actually encoded in the system; in the very dictates of law.

Another aspect of life on Medusa which is made plain in “The Trial”: constant surveillance. As chief security councilor of the planet, Octavia possesses the ability to spy on anyone, anywhere in the society.

Here, she spies on Liz and Rudy in Liz’s private quarters, using a drone-like device with a Dalek-type eye stalk. 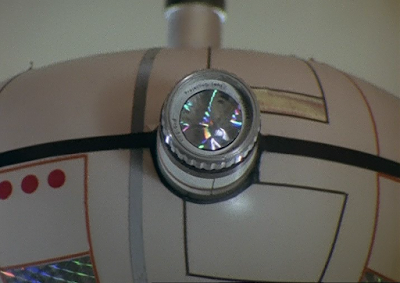 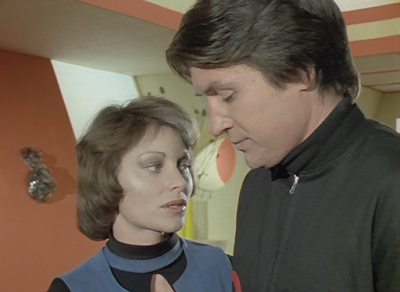 We also learn that the men of Medusa find it very difficult to disobey the “voice” of women. The government of Medusa in “The Trial” attempts to put down the rebellion, and in one scene nearly does so just by having women order the men to stop.

Obedience is so ingrained in these men that find it hard to cast off. 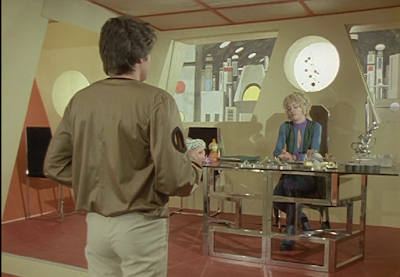 Fortunately, Rudi doesn't suffer from that problem. As a result, Medusan authorities constantly underestimate him.

Next week, we stay on Medusa for “Test for Love.”