Alien Week: They May Be Synthetic, But They're Not Stupid. The Androids of the Alien Saga 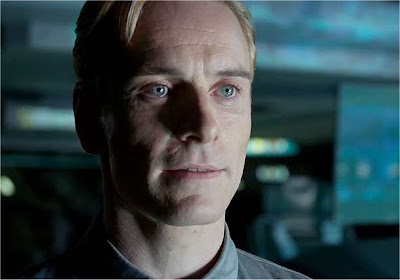 Now that we have Prometheus as our “small beginning” (!) to a “big thing” (the long-lived Alien franchise), there is an opportunity to gaze at the five films and chart new thematic or character connections.  Considering the critical role that David (Michael Fassbender) plays in Prometheus, Ridley Scott has given audiences and fans a wonderful opportunity to trace, specifically, the development of artificial life forms in the series.

In fact, with a little imagination and analysis, can we actually track the full evolution of a sentient, android race in the Alien franchise films? And can we do so in the same manner we would trace the growth of an individual human being; from birth to maturity?

Prometheus’s David is the first or earliest android in the chronology, we now understand.  This, in a sense, makes him the first of his kind, or a newborn…a child.  Accordingly, we see in the film how David seeks out guidance -- and like a human son or daughter -- models himself on those around him…whether an adopted parent or a figure he sees in a movie he enjoys (like T.E. Lawrence).

Also much like a young child, David seems to conform to no accepted rules of morality except those that are explicitly established for him by his Daddy, Weyland (Guy Pearce).

And when David has the opportunity to test the limits or boundaries of his world – for instance, when he speaks something cryptic to the Engineers – he seems to do so without hesitation.

So in David we witness a synthetic life form taking his first baby steps; reckoning with the world and attempting to determine his place in terms of a “family” and behavioral limitations.   In fact, David is the first android in any of the five films who is contextualized in terms of a standard, human family of origin, and here we meet not only patriarch Weyland, but David’s resentful “sibling,” Vickers.

In Prometheus, we also see David intentionally misbehave by opening a door in the temple when he shouldn’t, and by de-activating a camera feed to block his sister’s view. There seems to be something of the mischievous, capricious child in his demeanor.

Alien’s (1979) Ash (Ian Holm) is next in the chronology.  I’ve written about the intense sexual underpinnings of this Ridley Scott film before, but seen in the context of all the franchise androids, I now wonder if it’s possible to view Ash as the repressed teenager of the bunch.

Ash, clearly, is an android uncomfortable with his identity, and the way he fits in with the world around him.  He is frequently bullied by Parker and challenged by Ripley.  Nobody likes him, and indeed…he isn’t likable.  Sound like any thirteen year old kids you know?

No wonder Ash gazes at the alien with such wonder and awe.  The xenomorph is hostility personified, but also simplicity personified. It knows exactly where it fits in -- anywhere it wants to! -- and exactly how to co-opt other life forms to its (nefarious) ends.  Ash -- an adolescent seeking his place -- can’t say the same thing.

Bishop, portrayed by Lance Henriksen, appears in Aliens (1986) and Alien3 (1992).  Unlike his predecessors, this android seems to have accepted his role (and limits) in human society with grace.  This may be because Bishop is governed by new programming (not available for earlier models like David and Ash, ostensibly…) that prohibits him from acting in a way that allows human beings to be harmed.  Bishop is still child-like, much like David, but – importantly – is much more stable in temperament.    Again, part of the process of maturation in humans is observing limits and understanding that one fits in with a group, and can’t act on any and every impulse.

Thus Bishop seems like a young if still naïve man who has accepted the law of society (Asimov’s laws of robotics) and accepts that they protect everyone.  He may admire the alien, like Ash did, but Bishop’s adherence and acceptance of a law outside himself or a parent means that he can’t be swept up in this infatuation.

Uniquely, Bishop also faces death with grace, realizing that it is better to die on Fury 161 then to linger in a state of half-life.   One of Alien 3’s greatest rhetorical reversals involves the Bishop character, and audience acceptance of him.  After two movies, our image of the kindly, even sweet Bishop android has erased the memory of the duplicitous and mad Ash.  So when the real Bishop – a flesh-and-blood human – appears to tempt Ripley with a life she can’t have, we want more than anything to trust him.  The android in the Alien series has thus gone from being a dangerous child and mad teen to a productive, trusted and beloved person…even in the eyes of humanity. 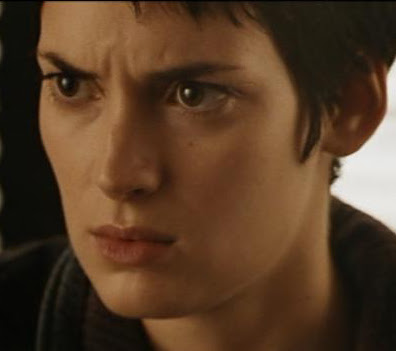 The last android we meet in the Alien series is Alien Resurrection’s Call (1997), played by Winona Ryder.  In a very significant way, she represents the final evolution of the android journey.  Not only is she stable like Bishop was, but she is able to look outward – beyond concern for herself or her immediate companions -- to the well-being of the universe at large.  Perhaps not coincidentally, Call is also the first female android we meet in the series, though the jury is still out on Vickers...

For the first time in the series, an artificial person, Call, independently reaches the same eminently reasonable reckoning about the aliens that the human Ripley did immediately before her apotheosis on Fury 161: that they must be destroyed at any cost to assure the safety of all life forms. What we have here, then, is a synthetic being who sees life as worthwhile, and attempts to nurture and protect it. Is that one way to define maturity? Being able to see outside yourself, your desires, and even the law, and acknowledging some brand of connection among life forms?  Prioritizing life over selfish, financial, or military gain?

If we do get the much-anticipated sequel to Prometheus, it will be intriguing to see how David’s continuing journey fills in the rest of the gap, leading up to the fussy, fastidious, pent-up Ash.   Cannon, a reader here on the blog commented (with insight) yesterday that David is actually symbolic of the Prometheus myth himself.  Like Prometheus, he is neither man nor God (Engineer), but a Titan, and thus apart.

The journey of the androids in the Alien series reflects that separation.  These synthetic beings start out (historically) as separate, disdained (David) and hostile (Ash), but become integrated into the human community and even trusted (Bishop), to the point that they finally -- at last (in Call) -- echo our finest values as a species.
at May 19, 2017