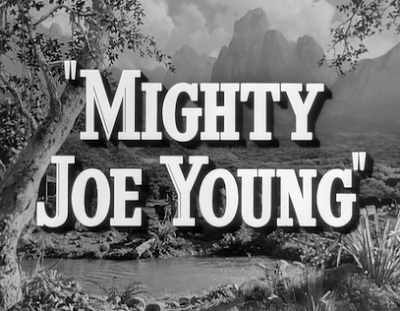 In several significant ways, Mighty Joe Young (1949) might be described as the “most evolved” of the Merian C. Cooper/Ernest Schoedsack giant ape films of the 1930s and 1940s.

In part this is so because the third (and last) film in the cycle understands that audience sympathies rest with the exploited main character, a kindly gorilla named Joe, and not with the humans who exploit him for financial gain.

And in part this is so because this film depicts the female lead character, Jill Young (Terry Moore) as more than a screaming ninny.  The feisty Jill can see beyond Joe’s intimidating physicality -- in part because she raised him -- and recognize that he is an intelligent creature worthy of dignity and respect.  Jill is no mere damsel in distress, but rather a very human woman trying to do the right thing, and honor the important relationships in her life, both with Joe, and with promoter Max O’Hara (Robert Armstrong again), the man who brought her “fame and fortune” in Hollywood.

These elements, along with an exciting chase and nail-biting finale, make Mighty Joe Young a solid addition to the King Kong canon, even if the film doesn’t actually concern Kong or his progeny.

Mighty Joe Young begins with little Jill Young (Moore) living on her father’s farm in Africa.  She trades a baby gorilla for several trinkets, including a flashlight, and decides to raise the ape she names “Joe.”  Her father objects to this course of action, worrying that the gorilla will one day grow into a fierce animal and menace.

But Jill prevails, and a friendship is born. 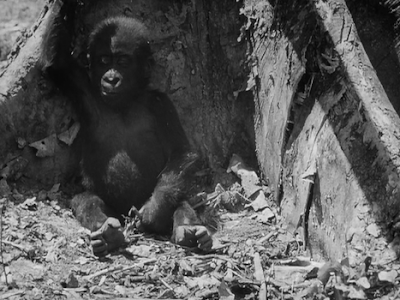 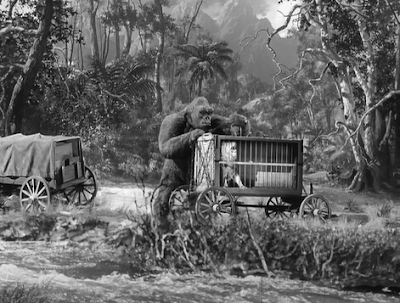 Twelve years later, Max O’Hara (Armstrong) plots to make his next Hollywood night club, “The Golden Safari,” a runaway success.  He strikes on the idea of going on a dangerous safari in Africa with cowboy, Gregg (Ben Johnson) in tow.  Once there, they collect man-eating lions and other animals, and then unexpectedly encounter a fully-grown gorilla, Joe.  Max urges Jill to sign a contract making the ape and his master the newest (permanent) attractions at the Golden Safari.

Back in Hollywood, Joe grows increasingly depressed by the nightly festivities in the club, and his near-continual entrapment in a too-small cage.  Jill sees the gorilla suffering, and attempts to get out of her contract with Max.  He sweet-talks her back into compliance, and the Mighty Joe Young show continues for a whopping seventeen weeks.

Then, one night, a trio of obnoxious drunks release Joe from his cage, feed him champagne, and watch as the gorilla trashes the club from top to bottom.  Deemed a public safety menace by a judge, Joe is ordered executed.  Realizing what he has done to Jill and Joe, Max O’Hara teams up with Gregg and Jill to free the ape from captivity, and return him to his home in Africa.

On the way to freedom, however, Gregg, Jill, and Joe spy a disaster in the making.  An orphanage is burning down fast, and three children are trapped upstairs with no hope of escape.

One last time, it’s Joe to the rescue…

Although there are no prehistoric monsters on hand in Mighty Joe Young, the film nonetheless perfects (or evolves) the King Kong formula.  Max O’Hara -- the familiar showman character -- undergoes his transformation from exploiter to defender in one movie, not two (as was the case with Carl Denham), and the movie also makes the point that there is something worse than imprisonment…the loss of dignity.

Here, Joe undergoes a horrible humiliation when a nightclub routine requires Jill to dress up as an organ grinder, and Joe as her monkey.  Then, the unruly crowd is encouraged to throw giant coins at Joe while he catches them in his cap.   One drunk gets out of hand and tosses a glass champagne bottle at the ape.  This is a miserable moment for Joe, one which reduces the noble beast to the level of carnival freak. 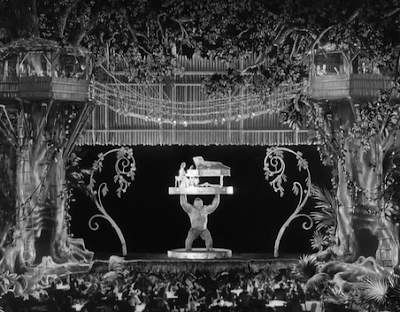 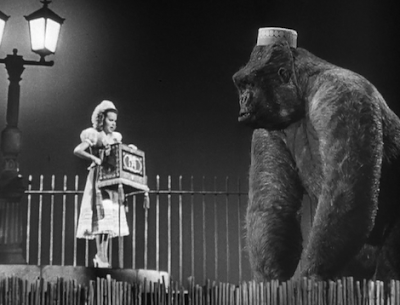 Joe goes wild soon after this humiliation and destroys Max’s night club, but he finds redemption by saving the imperiled children at the burning orphanage.  Again, this kind of redemption was something denied Kong in the original film (though awarded to his son, in The Son of Kong).

Though it is impossible to argue that Mighty Joe Young is more spectacular or exciting than King Kong was, one can certainly detect how a very similar story (with similar characters) is more completely and emotionally told here.   Some may consider that comment a heretical remark in terms of cinema history, but at least three of the four leads in Mighty Joe Young -- Max, Jill, and Joe himself -- are treated with greater humanity than their counterparts were in King Kong.

While there’s nothing as awe-inspiring as a battle with a T-Rex in this film, Mighty Joe Young nonetheless satisfies on a purely human level.  No one in King Kong really listened to their conscience, at least until it was far too late.  Here, the characters all make difficult personal decisions to repair the breach, and honor their friendship with Joe.

I had not seen Mighty Joe Young in several years before this recent viewing, and was delighted to find the film so engaging, and so action-packed. My wife watched this one with me, and was on the edge of her seat during the finale at the orphanage.  She told me that if Joe died, I should just turn the movie off right then, because she couldn’t handle it. 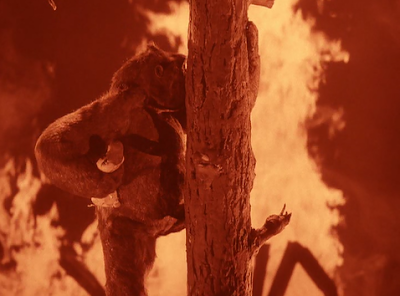 That in-the-moment exclamation/protest reveals how successfully Mighty Joe Young works on an emotional level. It’s not the Beauty and the Beast epic or prehistoric safari that King Kong is, but it’s a damned exciting and engaging adventure film with some fine special effects (from Willis O'Brien and Ray Harryhausen).

The very next night after I watched Mighty Joe Young with Kathryn, I watched it again with my six-year old son, Joel, and now it’s his new favorite movie.
at March 06, 2017