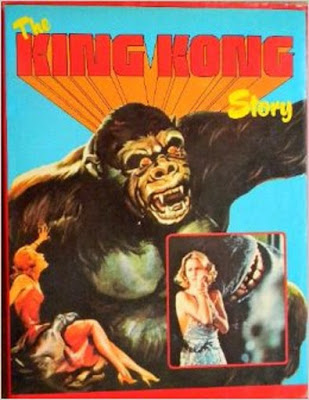 As many readers here know, I grew up reading movie and TV reference books.  Reading might not be strong enough a word for this passion.  I practically consumed these books.

One of my earliest and most cherished memories of doing so involves this particular text: The King Kong Story.

Written by Jeremy Pascall and designed by Rob Burt, this Chartwell Book was published in 1977, and I first discovered it a comic-book store located at Englishtown Flea Market, in New Jersey, shortly thereafter.

As soon as I paid for the book with my allowance, I got the keys to the car from my parents, left the market, returned to the parking lot, and began reading. I don't think I even looked up from the book for hours (while my family finished the rest of the market).

And just in the first week alone, I must have read The King Kong Story at least five times. At that point, I was obsessed with monsters such as Godzilla and King Kong, and, if memory serves, Star Wars (1977) was not yet on the horizon.

The book is divided into 4 chapters. "The Birth of Kong," the first chapter, gives details about the talents who created the tale (Edgar Wallace, Merian C. Cooper, and Ernest Schoedsack), and explains the origins of the "strangest story ever conceived by man."

The second chapter, "The Making of Kong," explores the complexities and indeed difficulties of creating the 1933 masterpiece. This chapter features amazing, behind-the-scenes photos, particularly pages 20-23. As a kid, I ate up all the detail about the different special effects techniques that brought Kong to screen.

"The Indestructible Kong," the book's third chapter, looks at the various big-screen offshoots of the legend.   It focuses on Son of Kong, Mighty Joe Young, King Kong vs. Godzilla, King Kong Escapes, Konga, and even Queen Kong.

As a kid, I found this a particularly intriguing chapter, because it gave me other Kong-related titles to seek out.  This has not been a short journey, either.  I didn't see Konga until it was rerun on TV sometime in the 1980's, and I never saw Queen Kong until this year, 2017, when I found it was available to stream on Amazon for free. It was a very strange experience to see a film, for the first time, that I had read about forty years earlier.

The book's final chapter, "The New King Kong," of course, gazed at the controversial 1970's remake. I suppose I am still defensive about the film, all these years late.  I love it.  I love the location shooting. I love the fact that Kong is more sympathetic than he was in the 1933 film.  And I love the Oil/Energy Crisis theme, which I believes allows the film to thrive as an original work of art.

It is funny to think about all this now, calling Kong '76 the "new" Kong. Since this book was published, there have been two other "new" King Kong re-boots, one in 2005, and one premiering this Friday, March 10, 2017.

I kept and re-read my copy of The King Kong Story for years. I read it so often that, finally, that the book fell apart.  It is actually in a plastic bag in my office closet at the moment...in four pieces. I have not been able to bring myself to get rid of it.

But I in anticipation of this week, I ordered a copy from Amazon, and now have a new edition, with jacket (which I lost...) to consult.  So for King Kong Week, I have been revisiting this book, and it's like catching up with an old friend.