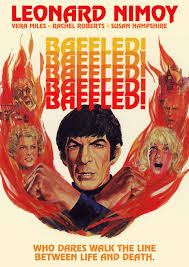 The TV-movies of the 1970’s were veritably obsessed with matters of the occult, and with psychic powers too. I reviewed Sweet, Sweet Rachel (1971) not long ago, and now here’s another movie with similar themes and structure: Baffled! (1973).

Like Sweet, Sweet Rachel before it, Baffled! concerns a person from our Modern Age of Reason and Technology (The 20th and 21st century) who becomes unexpectedly engulfed in a psychic “mystery” and must solve a crime related to it.  These films are as much detective stories (or film noirs, I suppose you could argue) as they are horror pictures. They involve murder, robbery, and other criminal activity.

And also like that earlier film, Baffled! is a bit slow-paced and over-long. The pacing seems off at points, and some action beats don’t succeed, either because of inadequate staging (bad rear projection) or a lack of suspense.

Finally, Baffled! too was designed to be the pilot for an ongoing TV series.  Sweet, Sweet Rachel went on to become The Sixth Sense (1972), a series that starred Garry Collins and lasted two seasons.

Baffled! never went on to series format, even though the movie boasts some promise

What, exactly is that promise?

It’s in the performances, specifically. Leonard Nimoy and Susan Hampshire star as the duo investigating the unusual supernatural events, and there’s some good, interesting chemistry between the performers. For those of you who are familiar with Nimoy primarily as the unemotional Spock on Star Trek (1966-1969), Baffled! is a remarkable counterpoint. He’s charming, laidback, and quite funny in the telefilm. Susan Hampshire, playing an occult expert, is surprisingly sweet and innocent in the role, which is an interesting twist too.  Where Alex Dreier and Gary Collins both performed their “psychic” support roles with utter solemnity and seriousness, Hampshire plays it all sincerely, but gently.

In all, Baffled! is intriguing, but not great. 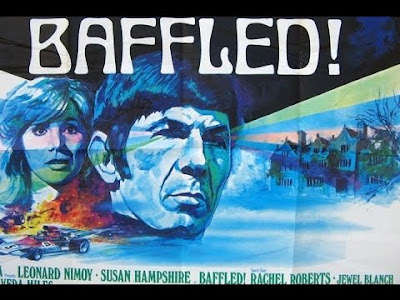 “Evil forces do exist. Always have…”

During a competitive car race at the Pennsylvania Run, ace driver Tom Kovack (Nimoy) runs off the road when he experiences a psychic vision of a woman in trouble, in a manor house in England.  An expert in psychic phenomena and student of the occult, Michelle Brent (Hampshire) meets with him later, and suggests to him that his vision was true; that he possesses a “rare and mysterious insight.”

At first, Kovack dismisses this possibility out-of-hand, but soon experiences a second and a third vision.  In one such vision, he falls from the manor house -- which Michelle has identified real place, Wyndham House in Devon -- into s turbulent ocean over the cliff-side.  After the startling vision, Kovack discovers that he is actually soaked.

Realizing he needs help to understand better what is happening to him, Kovack teams up with Michelle, and they had to England together, to stay at Wyndham House and investigate.
There is another guest staying there too, a famous movie star, Andrea Glenn (Vera Miles). She is waiting for her estranged husband, and has brought their twelve-year old daughter, Jennifer (Jewel Blanch) to the house as well.

After Jennifer receives a necklace with a wolf-head pendant from her mysterious, absent father, the girl seems to age dramatically in a day, acting like a fifteen-year old, surly teenager.

Mrs. Farraday (Rachel Roberts), who runs the house, however, starts to appear much younger.

Tom becomes convinced that Andrea was the woman in danger in his first vision, and that some dark force has taken control of her daughter, Jennifer, and is plotting against her. 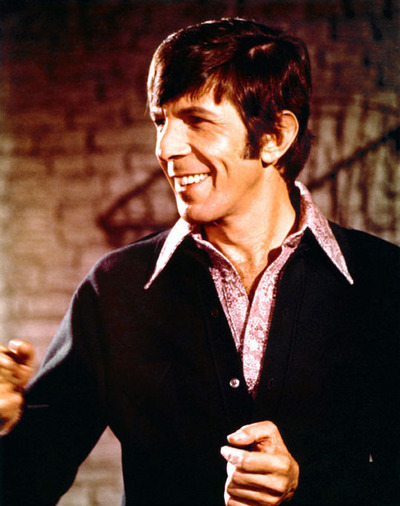 Baffled! is one of those cases in which a movie’s set-up is more intriguing, finally, than the actual plot or resolution of the plot. After all is said and done, the psychic plot is just a gimmick and the real motive here is for someone to acquire Andrea Glenn’s fortune.

The best part of this telefilm is the first half-hour, wherein Tom Kovack experiences his first psychic visions, and encounters Michelle, who encourages him to pursue them.  The writing is strong, the performances a good, and there’s even a bit of a cinematic feel to the production.

Once the film has settled down in the British manor house, by contrast, the movie loses some of its interest, and comes to a near stand-still in terms of pacing. Unlike Sweet, Sweet Rachel and its follow-up, The Sixth Sense, the visuals in Baffled! aren’t even particularly stylish. Stylish, colorful murder sequences enlivened both earlier productions, and yet are absent here. 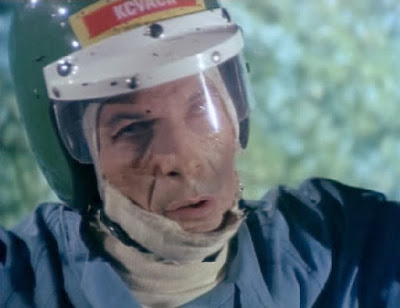 The movie’s real virtue is, frankly, Leonard Nimoy, who is so un-Spock-like here it is astounding.  Tom Kovack is a mellow seventies bachelor (and race car driver), trying to make time with the ladies and commenting ironically on everything that happens to him. I wouldn’t say that Nimoy is Shatner-esque in the film, but he seems is downright effusive compared to his buttoned down, controlled performances as the half-Vulcan. 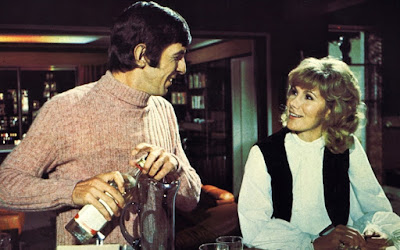 The mystery itself is a bit odd, and uninspiring, and director Philip Leacock fails to wring substantial suspense from the action, even when Kovack and Michelle become trapped in the bottom of the elevator shaft in Wyndham House. The film’s ending -- and restoration of order -- can be seen coming a mile away, and reflects the laws of the occult established as far back as The Picture of Dorian Gray (1890).

Baffled! also ends with a plug for a series that would never come. After the mystery is solved at Wyndham House, Kovack and Michelle decide to go their separate ways. But then -- just as he is getting in his car – Tom conveniently experiences another vision that shows someone (strangers) in danger. He summons Michelle, she jumps into his car, and they’re off to solve another psychic case.
So, they’re a team! 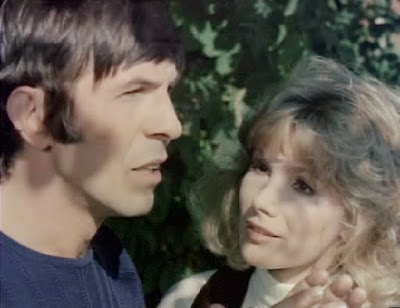 There’s a part of me that is sorry that Baffled didn’t make it to series so we could see that team solve more intriguing mysteries. I would have loved to see Nimoy and Hampshire work together again, and feel that if the episodes were an hour instead of 90 minute, there would be less chance for the tediousness that impacts some moments here.

Today, Baffled! is more of a curiosity than an artistically satisfying endeavor, and I can’t help but wonder how history would have been different if the concept had become a hit, and Nimoy became well-known not just for Star Trek, but for playing a groovy, 1970s psychic investigator.