“Everyone has a favorite movie... but what's your favorite scene in a movie?  And why?”

Now, Jason that is one heck of a question. I don’t know that I can limit myself to one favorite scene from one movie.  That is just way too hard!

So, I’m going to punt, and list a few of my favorite scenes in film history.  Also, I'm not saying that these are the best scenes in cinema history; just some of my favorites.  There's a difference.

First, from Planet of the Apes (1968): This is my favorite film, period, and the greatest science fiction ever made.

The final scene jumps to mind instantly, with Taylor (Charlton Heston) and Nova (Linda Harrison) riding a horse across that lonely shore-line. Suddenly, there’s a rusty outcropping in the sand, and Taylor disembarks from his steed.

He faces, above him, the ruins of the Statue of Liberty, half-buried.

That scene continues to blow me away in terms of concept, execution and, finally, meaning.

There has never been a greater ending in the history of science fiction cinema, in my opinion.  And the film's point just crashes against the viewer's consciousness like those waves against the shore.

Another one of my favorite scenes comes from John Carpenter’s They Live (1988). 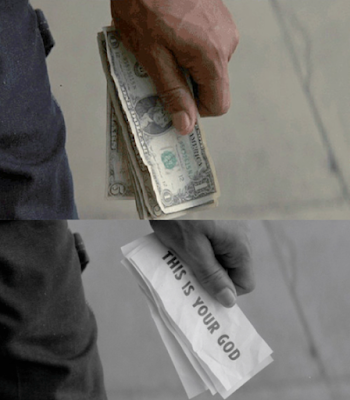 The scene I’m thinking about occurs after Nada (Roddy Piper) puts on the special sun-glasses for the first time, and sees reality as it is, not how the aliens have hypnotized the human race to see it.

He walks a busy city street, and realizes his life has been “colorized” (a bad movie trend in the late 1980s), and worse, all of reality has been shaped to sell products; to make him spend money; to turn him into a slave.

Billboards on the street read “Consume,” “Obey” and on the dollar bill is a legend that reads “This is your God.”

Like the Statue of Liberty moment in Planet of the Apes, this scene is absolutely devastating in terms of its composition, delivery of information, and its social commentary.

As Carpenter observed, too many of us worship the almighty dollar, live to purchase things, and ignore the big picture as long as we have our big TV sets, and other material comforts.  The preceding sentence sounds polemical, or like a political speech.  Carpenter makes the sentiment artistic. His point hits home with pictures, and we recognize it as truth without being lectured to. 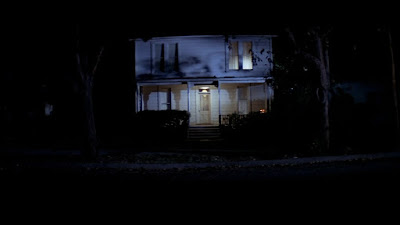 Another favorite moment or scene comes from the same director. In John Carpenter’s Halloween (1978), the film ends with The Shape vanishing. Loomis (Donald Pleasence) has shot him six times, and still his body disappears.

Suddenly, Carpenter cuts to this brilliant, crisply-edited montage, which shows us virtually every location in the film -- in reverse order, basically -- and we hear The Shape breathing…but don’t see him.   He really IS the boogeyman!  We might not see him, but he is always present!

I know that many readers are not fans of Prometheus (2012), but I love that film, and I think one of my all-time favorite horror scenes, in general, involves Elizabeth Shaw (Noomi Rapace) learning that she has been impregnated by an alien life-form, and then going to a surgery machine to have it removed.

After her abdomen is sliced open and the wriggling monstrosity removed, the surgery machine staples her belly back together. This scene is brilliant, gruesome horror filmmaking at its best, and I still remember the reaction in the theater.

In terms of Star Trek movies -- another love of mine --- one of my all-time favorite scenes comes in an underrated chapter, Star Trek III: The Search for Spock (1984).

In this scene, Admiral Kirk (William Shatner) meets with the Head of Starfleet Command, Admiral Morrow, and asks permission to take the Enterprise back to the Genesis Planet to help the deceased but not-really dead Spock.

Morrow begins to lecture Kirk about his career; that it stands for “rationality” not “intellectual chaos.”  He warns Kirk that this “emotional behavior” will cause him to lose everything; that he will “destroy himself.”

The camera moves to a close-up of Shatner, and we see the exact moment, the exact second Kirk tunes out, realizing he will have to go it alone, over Starfleet’s objections. Morrow asks if Kirk understands him.  He responds, truthfully, “I hear you.”

In other words, he’s not listening, he’s planning his next move: stealing the Enterprise.

I love this particular moment because I believe it speaks volumes about Kirk’s friendship with, and commitment to Spock.

I could go on, because I have so many favorite scenes in film history.

I’d love to read more reader favorite moments, so if anyone has one, please share!

Don’t forget to ask me your questions at Muirbusiness@yahoo.com
at January 18, 2016