This episode of the 1970s Saturday morning Filmation program finds the Space Academy in orbit of a giant planet – a new visual effects -- but two comets are fast approaching on a collision course.

Commander Gampu (Jonathan Harris) sends Blue Team in a Seeker to activate explosive charges and destroy the comets before they can strike the Academy.

But on the comet's surface, Laura (Pamelyn Ferdin) and Chris (Ric Carrott) and the others (including Peepo) find veins and arteries in the ground.

And when one of the cadets attempts to hack off a sample, the rocks bleed.

It turns out the whole comet is alive. In fact, he’s a sick fellow by the name of Ergo. Peepo communicates with him and Ergo (in perfect English) tells the cadets "I forgive you...for chopping off pieces of me."

But Ergo is the least of the Academy's problems.

The second comet is named "Targ." And Targ is a criminal who wants to destroy everything, including the Academy and the seeker.

Ergo would be able to stop him from attacking if he were at full strength, but unfortunately he used the last of his free energy to enter the galaxy, and then the cadets started cutting into him.

Thinking of others first, the cadets are able to strengthen Ergo by feeding him "magnetic flux," and at the end of the day, Targ is defeated and Ergo is taken back to the Academy to be fully healed. 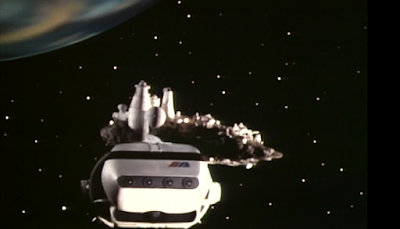 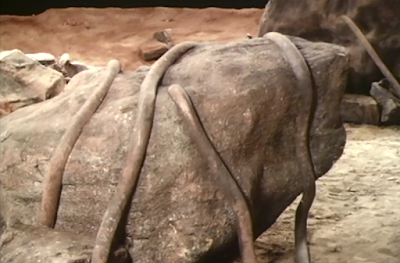 Probably just about every outer space show of the late 1960s and 1970s (and even some in the 1980s too...) featured dramas revolving around the silicon-based life-form; or rather "the living rock."

On Star Trek (1966-1969), of course, "Devil in the Dark" set the pace as probably the best of all these programs. That’s the story of Mommy Horta, and her silicon nodule eggs.  This is one of Joel’s favorite episodes of the series so far.

But Space: 1999 (1975-1977) also vetted a version of the silicon-life form story in Year Two called "All That Glisters," and it isn’t tremendously well-regarded.  I happen to enjoy the episode because of its fidelity to horror tropes. In this story, living rocks turn Alphans into zombies, and much of the narrative takes place in a dark (though splendidly lit…) Eagle interior, adding a level of claustrophobia to the adventure. I admire the eeriness of the presentation, if not always the details of the narrative.

As late as Star Trek: The Next Generation's "Home Soil" in 1988, the story of a silicon life-form discovered by space-going carbon-based folks (humans...us) has been a serviceable one for the genre.
"The Rocks of Janus" is Space Academy's sturdy and enjoyable contribution to this time-worn but trusty genre convention. If you recall, "Janus" was also the name of the Horta's planet in "Devil in the Dark," so you have to wonder if Space Academy scribe Samuel Peeples was paying homage where homage was due.

"The Rocks of Janus" doesn't add a whole lot to the "silicon life-form" sci-fi TV convention. Like "Home Soil" (which came much later), the life form isn't detected until after humans have injured it. Like "All that Glisters," the good guys (in this case, from the Academy) seek to help out and do right after committing (an accidental) wrong.  Otherwise, it's a familiar tale. 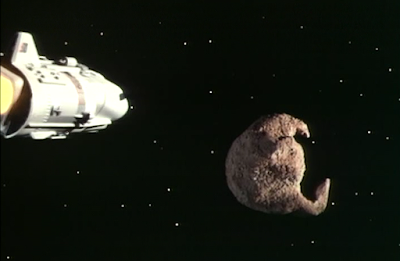 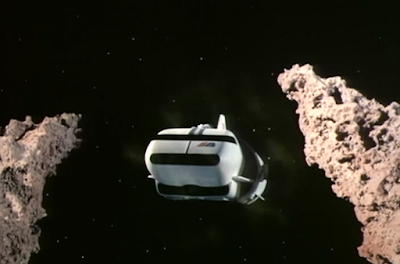 At its core, “The Rocks of Janus” is about beings of different nature learning to recognize, and then appreciate each other. Although some people hate the word “diversity” with a passion and feel it’s all kumbayas and puppies, I appreciate diversity on a practical level.

For example, if you attempt to solve a key problem, you want as many different answers to a problem as possible so you pick the best one. That’s the value of diversity.  Different experiences bring different skill sets and different perceptual sets to the table.  Why wouldn’t you want the widest number of solutions are your fingertips? 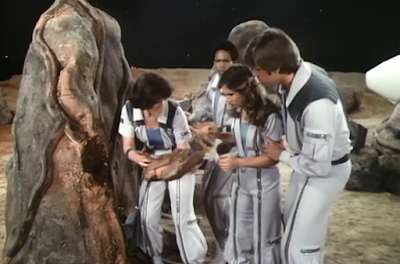 In this story, Ergo forgives the cadets their trespass, and he helps them after they heal him.  It’s a nice story of the cadets making an unusual friend, and learning that not all life-forms have to be the same, or believe in the same thing.  The story also isn't pollyana-ish because we meet not just a friendly, innocent alien, but a monstrous, sinister one as well.  That's life too.  Not everyone is your friend, but that doesn't mean you can't meet others -- people with different ideas -- with friendship first.

What else happens in this episode of Space Academy?

Well, we find out exactly what the Academy slang "Oraco!" means. "Order Received And Carried Out!"

Also, for the first time in the series, we see what appears to be a classroom, and a gathering of students.  As the episode starts, Commander Gampu lectures about the rocks of Janus. 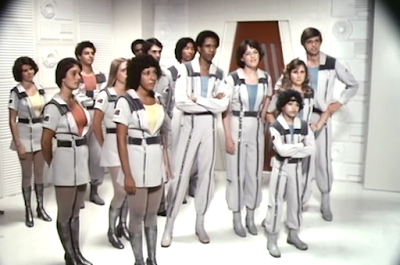