In “Attack of the Dragons,” Jason (Craig Littler’s) star fire is buffeted by Dragos’ (Sid Haig) electron storm.  He determines that the ship can return to normal space only after the storm is struck by laser cannons.

But as Commander Canarvin (James Doohan) reports, Star Command is a sitting duck, coming under attack by Dragos’ drone interceptors. Still, the Commander manages to fire the lasers and free Jason.

Jason returns the favor, launching a suicide run against Dragos’ Dragon ship and forcing the villain to withdraw. He succeeds, and Dragos retreats.

But Star Command has not yet heard the last of Dragos. 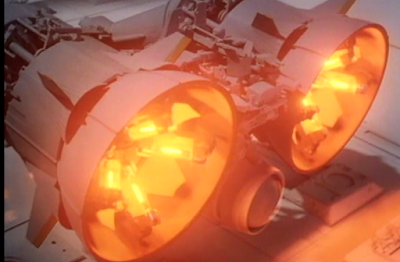 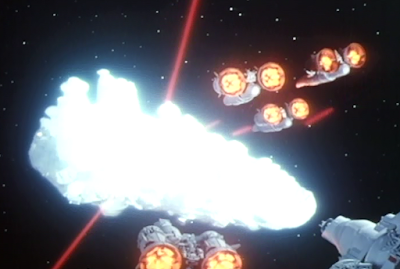 This fifteen minute segment of Jason of Star Command (1978-1980) is dominated by very strong Star Wars era visual effects. A Star Fire escapes from an electron storm, and meanwhile, Star Command is buffeted by an enemy squadron.

The effects hold up nicely, with only one caveat.  There’s a lot of model incongruities or dis-connects, largely because of one fact. Some episodes back, Princess Allegra returned to Star Command in a pod, so Jason’s Star Fire is now pod-less, so-to-speak.  However, many effects shots in this installment show confusion over that fact. Some shots feature the pod; some don’t. 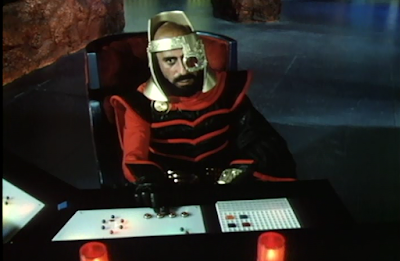 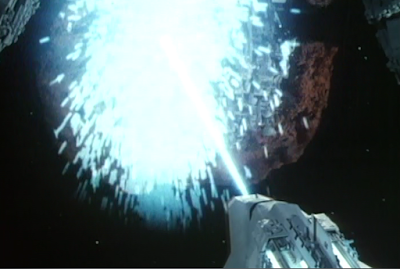 Speaking of Princess Allegra (Roseanne Katon), she and Captain Kidd (Brendan Dillon) share the same fate after this show. They are not seen, heard from, or referred to again.  They are written out of the story, going forward.  Perhaps Princess Allegra decided to return home, but what about Captain Kidd?  He’s a man out of another time period all together. Where will he go? How will he get there? What will he do?

Jason of Star Command doesn’t answer any of those questions. Still, Captain Kidd has a nice moment in this episode when he navigates Jason’s Star Fire using nautical tools of a bygone era. 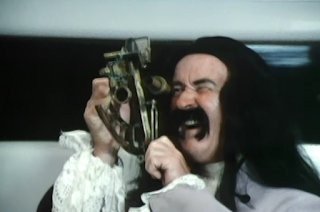 “Attack of the Dragons” might be considered a kind of section break or pivot point in the sixteen episode first season saga. Dragos is vanquished (temporarily), and all the main characters -- Jason, Nicole, Canarvin, Parsafoot and Wiki -- are back home.