In “Wild Adventure,” the Jupiter 2 travels through space on a course that will take it very near to Earth.

But Robinson relents and sets a course for Earth, making very careful to avoid a trajectory that will take the ship through the Sun.

Meanwhile, a strange green alien woman floats outside the Jupiter 2 and beckons Smith to join her there.  This woman Lorelei, is a space vampire of sorts, one who eats atomic fuel.

Dr. Smith dons a spacesuit and leaves through the airlock to meet Lorelei, unaware that his actions could jeopardize the ship’s return to Earth, and safe passage near the sun. 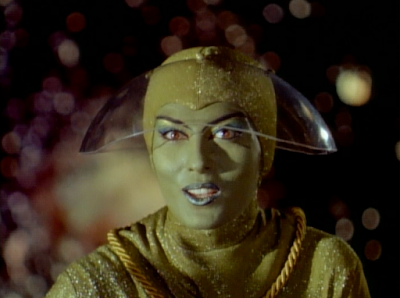 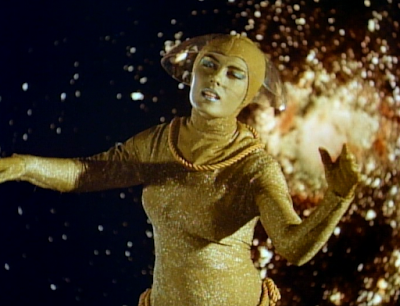 Although this is only my second review of Lost in Space, Season Two, I have actually watched four episodes at this point.

As you know, I’ve written some positive things about the series in the past.  I like the moody black-and-white photography of the first season.  I enjoy the fairy tale “parable” aspect of stories such as “My Friend, Mr. Nobody,” and “The Magic Mirror.”  I also champion the horror touches of such episodes as “Attack of the Monster Plants” and “The Ghost of Space.”

But the only word I can use to describe the second season so far is…dire. 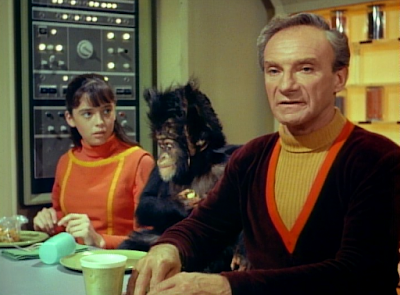 The stories are dire, and the execution of the stories is even worse.  This week, Smith wants to get back to Earth, but is lured into space by a green alien siren just at the moment when he could fulfill his dream and return home.

Hypnotized by this space personality, he misses Earth all together, and once more the Jupiter 2 is Lost in Space.

Specifically, it confuses star systems and galaxies. In the last act of “Wild Adventure,” the Jupiter 2 bypasses the Earth’s solar system (and a close-call with the Sun), only to find itself leaving the galaxy.  We know the Jupiter 2 doesn’t possess a hyperspace or star drive, so there is no explanation for how the ship goes from near Earth space to another galaxy in an instant.  Clearly, the writers have no notion about distances in space, or the hierarchy of solar systems/galaxies.  You can’t leave the galaxy from a point near Sol, unless you are traveling at incredible velocity.  But the exact line of dialogue in the episode reads: “Leaving Earth and departing the galaxy.” 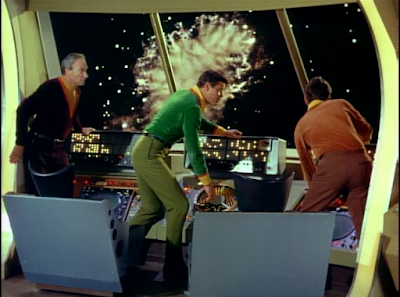 Other issues of credibility, scientific and otherwise also abound in “Wild Adventure,” like the fact that Smith can hear the space woman of “the Green Mist,” Lorelei (Vitina Marcus), even though she is outside the ship.  A simple notation that she is communicating via telepathy would ameliorate this concern.

Secondly, why does Lorelei make herself known to Smith, but not the other men? Smith is an odd choice to attempt to arouse, isn’t he? 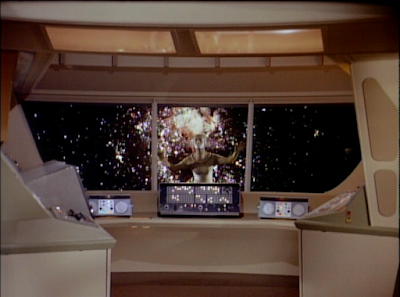 But, of course, there are mythic underpinnings here to consider that impact Lorelei’s nature. “Wild Adventure” is a variation on the Siren story, from Homer’s The Odyssey.  There, the Sirens sing an enticing song, but represent danger to the men of Odysseus’s ship. Lorelei represents the same qualities here.  She is a dangerous beauty; someone alluring who hides a monstrous or evil desire (in this case, to eat atomic fuel).

In sci-fi TV history, other series have also featured siren-like characters. On Space: 1999, “The Guardian of Piri” is a siren story of sorts.  And on Star Trek: The Animated Series, “The Lorelei Signal” involves a siren song calling the men of the Enterprise to a planetary surface.

It’s true that Lost in Space often takes mythic stories and puts a space age spin on them. We’ve already seen a variation on the King Midas story, for example, “All that Glitters.”  But “Wild Adventure” makes pretty wretched use of the siren trope, and is one of the worst episodes thus far in the canon.

I judge the episode so bad, in part because Smith’s bad behavior is again the motivator of most of the episode’s action.  He accidentally dumps the Jupiter 2’s fuel supply, for instance, thus making the ship unable to take long trips (though, as I noted above, it can still leave the galaxy…). His space-walk, similarly, is the thing that causes the Robinsons to miss a rendezvous with Earth.  He is not just a terrible person, and a constant thorn in the side.  …Smith is a crutch for the series writers too.  He is used to extend the series premise (of being Lost in Space) through his bad behavior. In story, or in universe, there’s no reason, at this point, for the Robinsons to tolerate his behavior.

The best part of the episode is the Jupiter 2's docking at a refueling station built by Earth technology. It's always cool to see other examples of Earth's space-age tech. 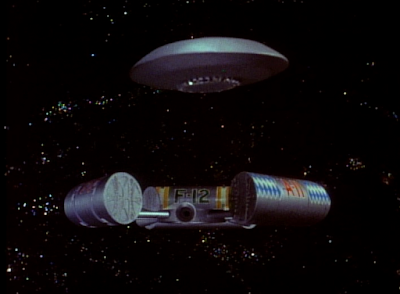 I was really looking forward to some Lost in Space adventures set in space, with the Robinsons and company encountering new alien life-forms.  But I didn’t expect anything as half-assed in conception and execution as this; as “Wild Adventure.”