In “Empress of Evil,” Frank Helfrin (Norman Alden) is surprised when a new villain, the Empress of Evil (Claudette Nevins) materializes in the Electra-Base.

The Empress commands him to summon Electra-Woman (Deidre Hall) and Dyna-Girl (Judy Strangis). They are on assignment covering a flower show (as Lori and Judy), but return immediately.

The Empress of Evil, assisted by the Great Lucrecia (Jacquelyn Hyde), plans “simply to rule the entire world,” but realizes she must remove her first and greatest obstacle: the superhero duo.  She decides on the plan of “divide and conquer,” practically ripping Electra Woman and DynaGirl apart on a molecular level.

Then, she renders the Electra-Comps useless.  Finally, the Empress reprograms the Crime Scope to self-destruct.

With time running out, ElectraWoman realizes that the Empress derives her strength from a kind of “anti-power” and that Frank’s new “electra-split” Electra-Comp app may reveal a crucial secret about the villainess’s nature.

“Empress of Evil” is probably the best episode of Sid and Marty Krofft’s ElectraWoman and DynaGirl I’ve reviewed thus far.

This is so, I wager, because the teleplay (by Dick Robbins and Duane Poole) throws some monkey-wrenches in the by-now standard formula.

For one, The Empress of Evil has a secret nature, and is not the real threat or primary threat.  As the episode reveals, Lucrecia -- a great illusionist -- built an amazing android.  That android is the Empress.  Thus Lucrecia is the real villain, even though she appears to be the minion. 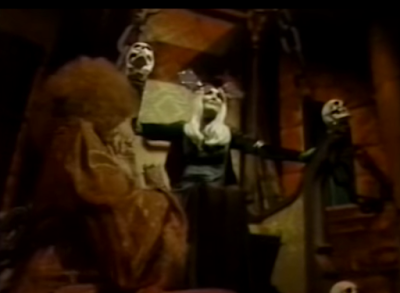 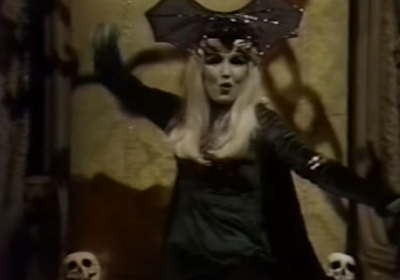 Secondly, the episode starts with an invasion of home turf. The Empress accosts Frank, revealing her abilities in the first scene, and putting ElectraWoman on the defensive.

And third, the Electra-Comps don’t work on the Empress for much of the episode.  The Electra-Comps are a bit of a crutch for the series writers, frankly. They can always get the heroes out of a jam.  Here, nothing seems to work until the very end.  It’s true that, keeping in formula, a new app saves the day at the last minute, but for much of the episode, EW and DG can’t rely on their gadgetry. 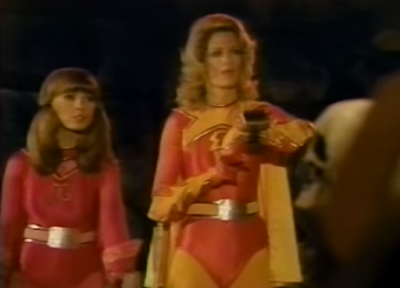 Like all episode of ElectraWoman and DynaGirl, “Empress of Evil” moves at a breakneck pace in both parts, and the result is an entertaining Saturday morning adventure.