In “Rain of Meteors,” a herd of Allosaur (called “Tahargas” by Gorok’s people) close in on the village. John Butler constructs a catapult to stop their advance.

Unfortunately, when John is testing his catapult, the boulder crashes near a scout from a neighboring tribe, the Sky People.

The injured boy is the son of Krona, Sky People leader.  And the Sky People -- who believe in Sky Gods and worship shooting stars and lightning -- are historically enemies of Gorak’s people.

Now that they believe Gorak’s people are on the war path, they will be impossible to reason with.

The Sky People prepare for war, but John thinks he can trick them into peace by using the catapult and hot rocks… 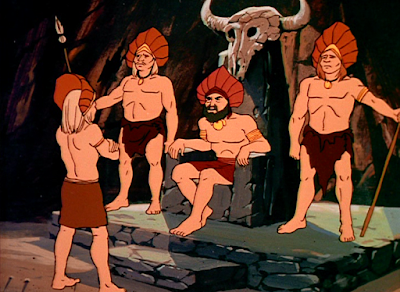 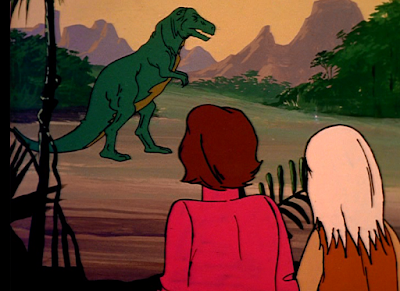 “Rain of Meteors” is not the best episode of Valley of the Dinosaurs (1974). In part, this is because the central plot involves trickery, and a bit of mockery.  Although the series often goes to great lengths to preach the value of diversity and empathy, that is not the case here.

Instead, John Butler pretty openly mocks the belief system of the Sky People, and when summoning their Gods (really a trick involving catapulted hot rocks…) he mockingly says nonsense words like “abra cadabra.” The vocal performance accentuates the mocking aspect of his story. 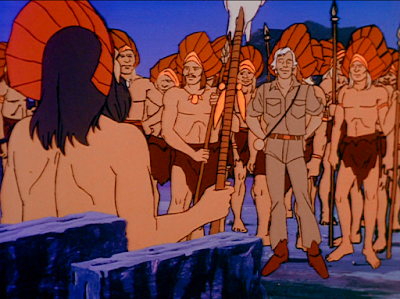 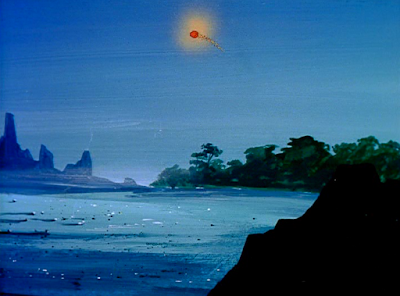 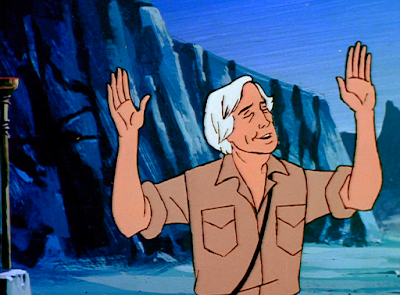 It’s a bit smug and condescending, and thus out-of-character for Butler, an educated man who would certainly understand that the Sky People, at their stage of development, are not primitives simply because they believe in Sky Gods.  That’s just where they are, based on tradition and heritage. Butler's behavior actually transmits as an ugly and patronizing moment in this episode.

After John Butler’s trickery, Gorak steps forward and asks the Sky People for their friendship.  They readily agree.

But how will the Sky People feel if they learn that they have been tricked, and their beliefs in the Gods mocked?

It will be very difficult to forge trust with them again, once they know how John used the catapult to manipulate them into peace.

Valley of the Dinosaurs, naturally, doesn’t go there, but one can’t help but consider the repercussions of the events in "Rain of Meteors."  It would not be at all unlikely to see a holy war occur between village and Sky People, based on the disrespect shown by 20th century man, John Butler.

Again, it’s just sort of baffling that the episode takes on this tone, since a key aspect of Valley of the Dinosaurs is the notion that our differences are what make us strong.  The cave people know about the valley and its denizens.  The Butlers know modern science.  Together, the families can survive, and thrive.  Yet in “Rain of Meteors,” the Sky People aren’t treated very honorably, in my opinion. The better story might have seen John explaining the nature of the lights in the Heaven, or forging peace without mocking the Sky Peoples' belief system.

Still, there’s the counter-balance of this narrative to consider.  Gara heals the injured boy, and uses a local plant to bring down his fever.  It’s clear that her intentions -- and Gorak’s too -- are noble. So in this episode, the cave people come off great, while the 20th century people come off like heels.