At Flashbak: Who Ya Gonna Crunch? (Movie-Based Breakfast Cereals of Yesteryear!)

My Flashbak post this week remembered the Blockbuster Movies-turned-Breakfast Cereals of Yesteryear.

Here's a snippet and the url (http://flashbak.com/ya-gonna-crunch-blockbuster-movie-based-cereal-commercials-yesteryear-37163/ ) 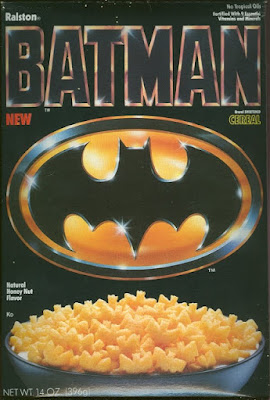 The cereals named for beloved movie characters featured below were termed “part of a nutritious breakfast” in their TV ads circa 1980 – 1990.

Notice the precise wording there. It would make Edward Bernays proud.

“Part of” actually means that there was nothing nutritious about these cereals, only that if a child consumed a glass of orange juice, a grapefruit, some oatmeal and toast along with the sugar-injected breakfast cereal, he or she might glean some nutritional value out of breakfast.

See how that works?

We know that product placement in movies reached escape velocity in the 1980s (see: Mac and Me [1988]), but still, it’s a little shocking in 2015 to look back and witness the craven commercialism of these breakfast cereal brands as they shamelessly trade on popular kid’s characters like E.T., Gizmo, C-3PO and the like."

Email ThisBlogThis!Share to TwitterShare to FacebookShare to Pinterest
Labels: At Flashbak, Flashbak